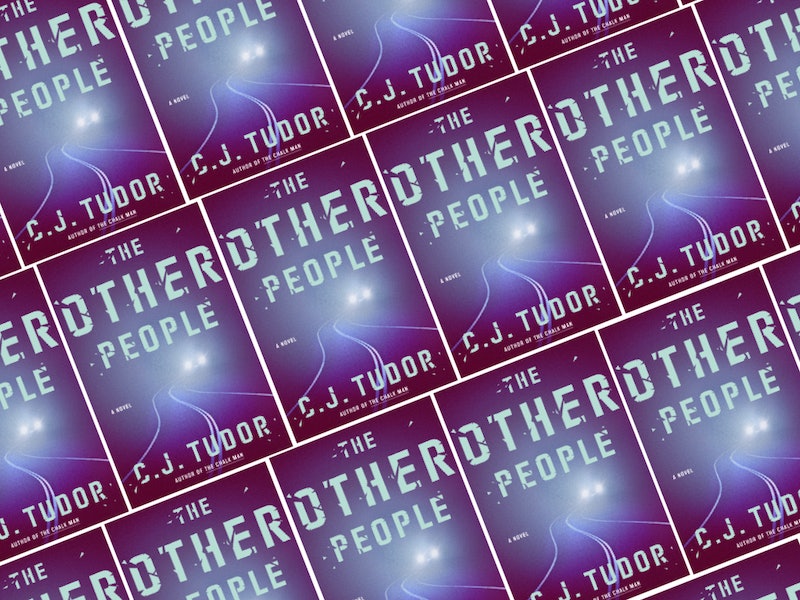 The author of The Chalk Man and The Hiding Place is back with an all-new, pulse-pounding thriller about a father's search for his kidnapped daughter — a girl everyone else believes is dead. You can start reading C.J. Tudor's The Other People right now, exclusively on Bustle, ahead of its release on Jan. 28 from Ballantine.

The Other People centers on Gabe, a man who has been trying to put his life back together for the last three years, ever since his wife and daughter were the victims of a violent crime. Although his father-in-law identified 5-year-old Izzy's body, Gabe is certain he saw his daughter on the night she disappeared in the back of a strange vehicle on a busy UK highway. Now, Gabe is "the thin man," a regular at roadside establishments. He's given up everything he had to search for Izzy, and he still holds out hope that he'll find her alive.

Since publishing The Chalk Man in 2018, C.J. Tudor has become one of the most celebrated thriller authors working today. Her debut recently received the 2019 International Thriller Writers and Barry Awards for Best First Novel, and the 2019 Strand Magazine Award for Best Debut Novel. Tudor's second novel, 2019's The Hiding Place, drew accolades from Alma Katsu (The Hunger), Aimee Molloy (The Perfect Mother), and Riley Sager (The Last Time I Lied). Tudor's third novel is already generating plenty of buzz, and you can start reading it right now:

He noticed the stickers first, surrounding the car’s rear window and lining the bumper:

When you drive like I do, you’d better believe in God.

Talk about mixed messages. Although one thing did come through loud and clear: the driver was a dick. Gabe was willing to bet he wore slogan T-shirts and had a picture at work of a monkey with its hands over its head and the caption: You don’t have to be mad to work here but it helps.

He was surprised the driver could see out of the back at all. On the other hand, at least he was providing reading material for people in traffic jams. Like the one they were currently stuck in. A long line of cars crawling through the M1 roadworks; it felt like they had started sometime in the last century and looked set to continue well into the next millennium.

Gabe sighed and tapped his fingers on the wheel, as though this could somehow hurry along the traffic, or summon a time machine. He was almost late. Not quite. Not yet. It was still within the bounds of possibility that he might make it home in time. But he wasn’t hopeful. In fact, hope had left him somewhere around Junction 19, along with all the drivers savvy enough to take their chances with their satnav and a country-lane diversion.

What was even more frustrating was that he had managed to leave on time today. He should easily have made it home by six thirty, so he could be there for dinner and Izzy’s bedtime, which he had promised — promised — Jenny that he would do tonight.

“Just once a week. That’s all I ask. One night when we eat together, you read your daughter a bedtime story and we pretend we’re a normal, happy family.”

That had hurt. She had meant it to.

Of course, he could have pointed out that he was the one who had got Izzy ready for school that morning, as Jenny had had to rush out to see a client. He was the one who had soothed their daughter and applied Savlon to her chin when their temperamental rescue cat (the one Jenny had adopted) had scratched her.

But he didn’t. Because they both knew it didn’t make up for all the missed times, the moments he hadn’t been there. Jenny was not an unreasonable woman. But when it came to family, she had a very definite line. If you crossed it, then it was a long time before she let you step back inside.

It was one of the reasons he loved her: her fierce devotion to their daughter. Gabe’s own mum had been more devoted to cheap vodka, and he had never known his dad. Gabe had sworn that he would be different; that he would always be there for his little girl.

And yet, here he was, stuck on the motorway, about to be late. Again. Jenny would not forgive him. Not this time. He didn’t want to dwell upon what that meant.

He had tried to call her, but it had gone to voicemail. And now his phone had less than 1 per cent battery, which meant it would die any minute and, typically, today of all days, he had left his charger at home. All he could do was sit, fighting the urge to press his foot on the accelerator and barge the rest of the traffic out of the way, tapping his fingers aggressively on the steering wheel, staring at bloody Sticker Man in front.

A lot of the stickers looked old. Faded and wrinkled. But then, the car itself looked ancient. An old Cortina, or something similar. It was sprayed that colour that was so popular in the seventies: a sort of grubby gold. Mouldy banana. Pollution sunset. Dying sun.

Dirty grey fumes puffed intermittently out of the wonky exhaust. The whole bumper was speckled with rust. He couldn’t see a manufacturer’s badge. It had probably fallen off, along with half of the number plate. Only the letters “T” and “N” and what could be part of a 6 or an 8 remained. He frowned. He was sure that wasn’t legal. The damn thing probably wasn’t even roadworthy, or insured, or driven by a qualified driver. Best not to get too close.

He was just considering changing lanes when the girl’s face appeared in the rear window, perfectly framed by the peeling stickers. She looked to be around five or six. Round-faced, pink-cheeked. Fine blonde hair pulled into two high pigtails.

His first thought was that she should be strapped into a car seat.

His second thought was: Izzy.

She stared at him. Her eyes widened. She opened her mouth, revealing a tooth missing right in the front. He remembered wrapping it in a tissue and tucking it under her pillow for the tooth fairy.

Then a hand reached back, grabbed her arm and yanked her down. Out of sight. Gone. Vanished.

He stared at the empty window.

His daughter was at home, with her mum. Probably watching the Disney channel while Jenny cooked dinner. She couldn’t be in the back of a strange car, going God knows where, not even strapped into a car seat.

Izzy. He accelerated. It was a new Range Rover. It went like shit off the proverbial shovel. And yet the battered old rust bucket in front was pulling away from him. He pressed the pedal down harder. Watched the speedometer creep up past seventy, seventy-five, eighty-five. He was gaining, and then the car in front suddenly darted into the middle lane and undertook several cars. Gabe followed, swerving in front of an HGV. The horn’s blare almost deafened him. His heart felt like it might just burst right out of his chest, like bloody Alien.

The car in front was weaving dangerously in and out of the traffic. Gabe was hemmed in by a Ford Focus on one side and a Toyota in front. Shit. He glanced in his mirror, pulled into the slow lane then darted back in front of the Toyota. At the same time a Jeep pulled in from the fast lane, just missing his bonnet. He slammed on his brakes. The Jeep driver flashed his hazards and gave him the finger.

“Screw you, too, you fucking wanker!”

The rust bucket was several cars in front now, still weaving, tail lights disappearing into the distance. He couldn’t keep up. It was too dangerous.

A sign flashed up ahead: SERVICES ½ MILE. He could pull in, make a phone call, put his mind at rest. But he was already late; he should keep going. On the other hand, what was a few more minutes? The slip road was sliding past. Keep going? Pull over? Keep going? Pull over? Izzy. At the last minute, he yanked the wheel to the left, bumping over the white hazard lines and eliciting more horn beeps. He sped up the slip road and into the services.

Gabe hardly ever stopped at service stations. He found them depressing, full of miserable people who wanted to be somewhere else.

He wasted precious minutes scuttling up and down, past the various food outlets, searching for a payphone, which he eventually found tucked away near the toilets. Just the one. No one used payphones any more. He wasted several more minutes looking for some change before he realized you could use a card. He extracted his debit card from his wallet, stuck it in and called home.

Jenny never answered on the first ring. She was always busy, always doing something with Izzy. Sometimes she said she wished she had eight pairs of hands. He should be there more, he thought. He should help.

A woman’s voice. But not Jenny. Unfamiliar. Had he called the wrong number? He didn’t call it very often. Again, it was all mobiles. He checked the number on the payphone. Definitely their landline number.

“Hello?” the voice said again. “Is that Mr Forman?”

“Yes. This is Mr Forman. Who the hell are you?”

“My name is Detective Inspector Maddock.”

A detective. In his house. Answering his phone.

“Where are you, Mr Forman?”

He was babbling. Like a guilty person. But then, he was guilty, wasn’t he? Of a lot of things.

“You need to come home, Mr Forman. Right away.”

“Why? What’s going on? What’s happened?”

A long pause. A swollen, stifling silence. The sort of silence, he thought, that brims with unspoken words. Words that are about to completely fuck up your life.

“It’s about your wife... and your daughter.”

Excerpt from THE OTHER PEOPLE by C.J. Tudor, copyright © 2020 by C.J. Tudor. Used by permission of Ballantine Books, an imprint of Random House, a division of Penguin Random House LLC. All rights reserved. No part of this excerpt may be reproduced or reprinted without permission in writing from the publisher.

C.J. Tudor's The Other People is out on Jan. 28 from Ballantine and is available for pre-order today.

More like this
'Bridgerton' S3 Teases Exciting Social Season For Penelope Featherington
By Bustle
The 'Firefly Lane' Book Ending Teases Way More Tears To Come In 2023
By K.W. Colyard
The 'Lady Chatterley's Lover' Book Leaves Us With A Troubling Question
By Catharina Cheung
David Tennant’s Transformation In ITV’s 'Litvinenko' Is Astonishing
By Sophie McEvoy
Get Even More From Bustle — Sign Up For The Newsletter

This article was originally published on Dec. 4, 2019