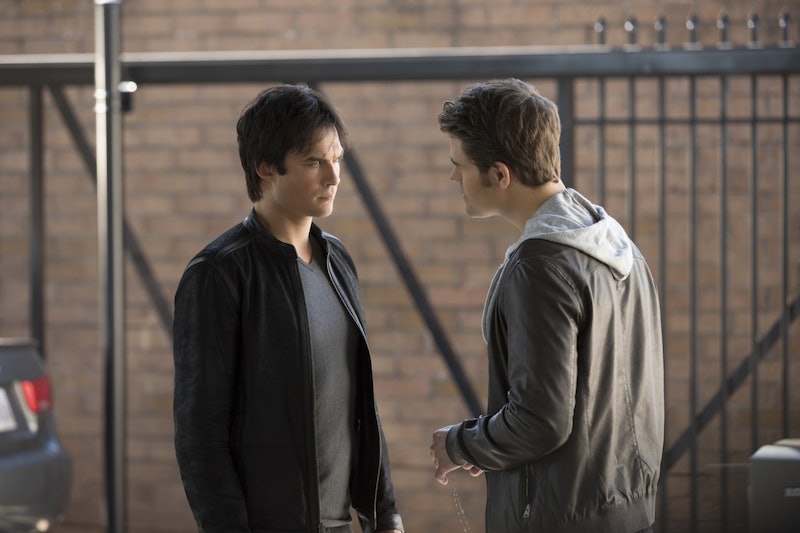 Stefan may have passed the point of no return on The Vampire Diaries. When we last saw Stefan in the show's mid-season finale, he had turned off his humanity switch to serve Cade alongside Damon for one year. In the mid-season premiere, "We Have History Together," a humanity-less Stefan somehow managed to keep a lid on his ripper tendencies, but that didn't last long. In trying to make sure Damon let go of his humanity completely, Stefan lost it. In other words: Stefan is a ripper again on The Vampire Diaries, and who knows if he'll be able to find his way back.

In his deal with Cade, Stefan swore to make good people do bad things, to turn them evil to then send to the devil. And he's making good on his promise, but Damon isn't so enthusiastic. Damon wants to send Cade people who are already evil, not innocents who are manipulated by Stefan into making bad choices. In an effort to get Damon on his side, Stefan pumped him full of vervaine and got him hospitalized, only to then manipulate the doctor in charge and convince her to kill Damon so that this organs could go to sick people in need.

Even after "dying" Damon still didn't want to kill the doctor, but Stefan said he had to. He found Elena's necklace and could tell that Damon was holding onto something, some part of goodness or humanity that couldn't easily erased. Even Damon, who had his memories of Elena manipulated by Sybil, still felt something for her. After Stefan confronted Damon about it, Damon agreed to kill the doctor himself, though he didn't let Stefan force him to get rid of the necklace.

Damon might be holding onto his humanity, but Stefan is definitely not. Despite successfully controlling himself for the past few weeks, drinking only what he needed, not ripping out his victims' throats, it seems something about killing the doctor changed something in him too. The next day, Damon found Stefan back at the hospital surrounded by bloody bodies. Stefan is back to being the ripper he once was, and with no humanity, no guilt, no consequences, who knows what he's capable of.