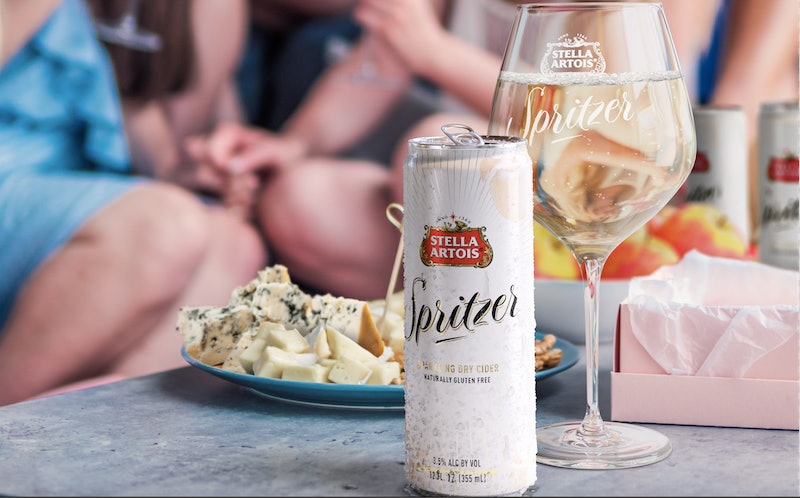 All of the Instagrammable drinks hitting shelves are going to have to slide to the left, because yet another ~aesthetic~ just hit the scene. You can now buy Stella Artois Spritzers, a "refreshing cider made from crisp apples and hibiscus," in stores nationwide. Per the company's website, this particular spritzer, which comes in a sleek, off-white can reminiscent of the brand's vibe, was designed to be poured and enjoyed in a wine glass — but TBH, you might like that first sip so much that your can doesn't make it that far.

Bustle had the opportunity to try the new Stella Artois Spritzers, which have, per Beverage Daily, been testing in limited markets since late 2018, and started fully rolling out nationwide in February. What makes this particular spritzer unique is that, unlike a lot of spritzers on the market, its sweetness isn't overwhelming — both the light bubbles and the hibiscus flavor cuts the sweetness of the apple, making it a milder drinking cider.

Personally, though, I think we would be doing this new spritzer a disservice not to put it in contention for the Brunch Drink of 2019 — not only does the mild sweetness do a good job of not overwhelming whatever you pair it with, but with an ABV of 3.5 percent, it makes a good sociable, sipping drink that you can enjoy without having to rally after a surprise afternoon hangover. (In related news, adulthood is a scam.)

While I'd argue that this drink does an excellent job of pairing with both sweet and savory options, Stella Artois included a few suggestions on its site, saying that it "impeccably pairs with an apple walnut salad, romano cheese, prosciutto and apricot jam." I can also confirm from personal experience that it pairs well with a giant heap of peanut butter chocolate-flavored ice cream, which also happened to be in my immediate vicinity was I was sampling it (it was, as one says, a Big Mood).

This isn't the first departure Stella Artois has made from its iconic beer — in 2013, the company launched Stella Artois Cidre, a tart, bubbly take on cider. Since then popular ciders have taken on all sorts of new flavors, from the rosé cider bonanza of 2018 to the new release of Pearsecco this year. Stella, though, seems to be sticking to more traditional fare with this spritzer — instead of going with an entirely new twist on the drink, it improves on the original one.

Chances are you may have already seen these cans on shelves, if you were part of the test market, or happened into a store where they hit shelves in February. They are currently selling in six-packs of 12-ounce slim cans, and will continue to roll out through spring. While there isn't a store locator function for these yet, you might try your hand at using the one for Stella Artois Cidre and calling up the stores that carry them to see if they have the Spritzers in yet — until actual spring comes, this new bubbly drink is the closest to it you can get.