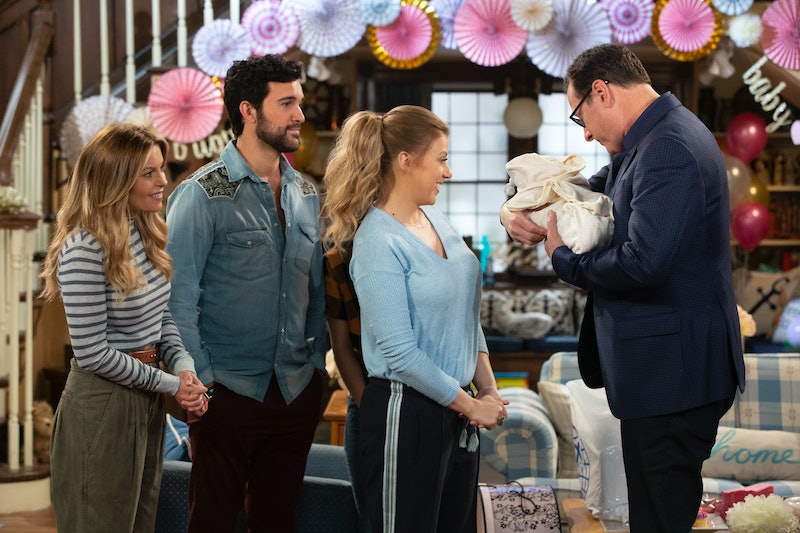 Spoilers ahead for Fuller House Season 5 Part A. Stephanie Tanner joined her family in adding to the circle of life at the end of Season 4. But Season 5 starts with Stephanie unsure of her ability to be a mom, and she was unequally certain what her child's name should be. While it took her a bit to think of it, Stephanie's baby name in Fuller House pays tribute to some key members of her family. Of course, the Full House spinoff wouldn't have it any other way since the Netflix series loves to keep everything in-house (literally). For her daughter's name, Stephanie went with Danielle Jo Tanner — to honor her dad Danny and her sister D.J. — and it's a lot better than the name of the Tanner ancestor Hekekiah.

When Uncle Jesse and Aunt Becky adopted a daughter in Season 2, they named her Pamela — after Jesse's sister and Danny's wife, who passed away before the events of Full House. But considering Danny was the only parent Stephanie really knew, she was inspired to show how meaningful he had been to her. Danny was struggling with not feeling needed anymore now that his kids are all grown up with children of his own. But Steph wasn't feeling confident in her mommy skills until she received a Danny Tanner pep talk and shared a sister-bonding moment with D.J. — and these moments led Steph to kick her doula to the curb and give a name to baby-to-be-named-later.

At the baby-naming party (just another Tanner tradition to add to the bunch), Steph announced the new addition to the Tanner family would be named Danielle, or Dani for short, for her dad. Her middle name is Jo — to match D.J.'s — so if anyone ever wanted to abbreviate Dani's name even more, she could go by D.J. like her aunt.

Steph said she was hoping that her baby's name would reveal itself and it eventually did — just in time for her sister's 6:30 p.m. deadline. (Frankly, it's pretty kind of Steph to name Dani after D.J. at all with the baby-naming party pressure.) And while Dani's dad Jimmy didn't get to represent his family in the name at all, his sister Kimmy — who carried Dani via in vitro fertilization as a surrogate — was given the duty of godmother. This way, the she-wolf pack was all represented through Stephanie's new baby and Danny Tanner's first granddaughter shares his name. Who doesn't need a Danny Tanner hug after all that?

More like this
The Banned 'Friends' Ad Shows Monica As You’ve Never Seen Her Before
By Sam Ramsden
'That '90s Show' Star Callie Haverda Got Advice From Mila Kunis & Ashton Kutcher
By Brad Witter
Ashton Kutcher Wants Danny Masterson “To Be Found Innocent” In Rape Retrial
By Jake Viswanath
All The ’70s Easter Eggs You Missed In 'That ’90s Show'
By Grace Wehniainen
Get Even More From Bustle — Sign Up For The Newsletter
From hair trends to relationship advice, our daily newsletter has everything you need to sound like a person who’s on TikTok, even if you aren’t.