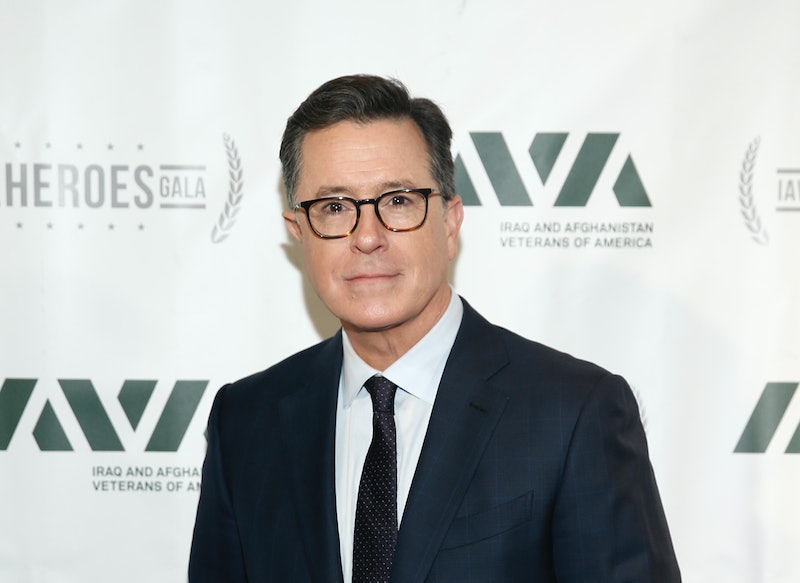 The Late Show host honored the former president who died on Friday by focusing on his military service and sense of humor. But Stephen Colbert's tribute to President George H.W. Bush wasn't exclusively about the 41st commander-in-chief — the comedian also used the opportunity to poke fun at President Donald Trump.

"Bush served in World War II as a torpedo bomber pilot in the Pacific theater, flew 58 missions. When his plane got hit by Japanese anti-aircraft guns, he had to bail out," Colbert explained, playing footage of a young Bush being rescued by the crew of a submarine. "The closest our current president has gotten to a submarine is a $5 footlong."

Trump's critics have made fun of his lack of military service since he launched his presidential campaign. In fact, the current president deferred the Vietnam War draft a total of five times despite seeming like "the picture of health" at the time, according to The New York Times. His first four deferments were to attend college, while the final one related to a diagnosis of bone spurs in his feet. He told The Times in 2016 that the bone spurs had been "temporary."

As is expected of late-night hosts, Colbert's segment about Bush wasn't all serious. He included a video clip of the former POTUS in a cringeworthy situation a few decades ago.

“Of course almost 50 years later, Bush did get back at Japan when he threw up in the lap of the Japanese prime minister,” Colbert said. Bush's spokesperson confirmed after the incident that he had gotten sick at his seat and then collapsed, as The Times reported in 1992. The president later told the prime minister that he felt "so embarrassed" that the episode had ruined the dinner.

Colbert then told the story of Bush Sr. filming a short video for him to play when his old show went to Iraq to entertain troops in 2009. "Back in World War II, the USO used to send us great big stars like Marlene Dietrich, Lauren Bacall, and The Rockettes," Bush says in the clip. "I'm just saying, this Stephen Colbert guy better have great legs."

Despite numerous comparisons between the late president and Trump over the weekend (which didn't generally favor the current POTUS), he and the first lady paid their respects to Bush in the U.S. Capitol Rotunda on Monday. The current White House occupants will reportedly attend his funeral on Wednesday despite mocking the Bush family in the past. "Looking forward to being with the Bush Family to pay my respects to President George H.W. Bush," Trump tweeted on Monday.

He even tweeted a video of him visiting Bush's casket in the Capitol Rotunda, with solemn music playing as he walks into the room. The tweet simply said "#Remembering41," but the clip seemed to focus more on Trump than Bush Sr. As Colbert pointed out, the two presidents approached their public service very differently.