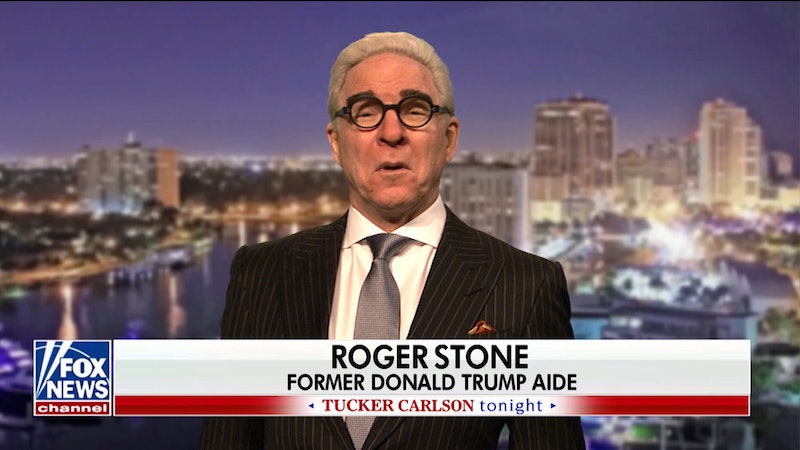 Whenever a new political figure makes national news, one of the first questions that swirls around the culture is "who is going to play this person on Saturday Night Live?" Roger Stone has been in the world of politics for decades, but his recent arrest thrust him into the national spotlight and Saturday Night Live dedicated their cold open to letting an SNL icon give life to the conservative political figure. Steve Martin's SNL appearance as Roger Stone was a welcome surprise to fans of the show and, in retrospect, as perfect a pairing of performer and impression as SNL could've assembled, especially on such short notice.

While the week leading up to the January 27 SNL may have been the first time that many people have ever heard of Roger Stone, the strategist's eccentric reputation has been building since the mid-20th century. For a larger-than-life character whose most immediate physical feature is his slick white hair, who better to play that role than a larger-than-life performer whose most immediate physical feature is his slick white hair like Steve Martin? While it's no surprise that Steve Martin — one of SNL's most frequent guests — appeared to impersonate Roger Stone, what is surprising is that for many fans of the show, Martin was not immediately recognizable. To play Stone, Martin was covered with heavy prosthetics and may have confused some viewers until host James McAvoy explicitly stated during the monologue that he was in the same building as Martin.

The show's cold open, which was a parody of the Fox News program hosted by and named after Tucker Carlson, featured Cecily Strong as conservative personality Jeanine Pirro and Kate McKinnon as U.S. Secretary of commerce Wilber Ross before bringing out Roger Stone who, in an exuberant mood, proclaimed "Go Nixon!" Despite his indictment and the many charges against him, Martin's Stone insists that he is merely "a poor, helpless old man." Even worse for the fictional Stone, he's been having difficulties paying for his legal fees despite having several books available to be sold. The reason no one is buying Stone's books? In Stone's own words, "because they're bad!"

Martin's appearance brought some praise from fans on Twitter, but also some scrutiny from fans who thought they heard Martin utter a swear word on network television. During the sketch, Stone at one point explains that he's set up a donation page because everyone in his life is telling him to "go fund himself." Although Martin said "fund" in place of another word that starts with the letter F, some SNL viewers thought they heard explicit language — but perhaps they were mistaking Martin for the actual Roger Stone, who in public has become infamous for speaking his mind, even if what's on his mind isn't necessarily true. Roger Stone is just the latest in a long line of figures that are getting the national spotlight for their connection to Trump, which begs the question — will SNL run out of celebrities to do cameos as associates of Trump? While there are only so many actors that can play the real people behind Trump's presidency, they clearly picked the perfect person to play Stone.

More like this
Shonda Rhimes' Net Worth Makes Her One Of The Wealthiest People In TV History
By Hugh McIntyre
How Much Are The 'Schitt’s Creek' Stars Worth?
By Hugh McIntyre
‘SNL’ Finally Spoofed Nicole Kidman’s Weirdly Beloved AMC Ad & Nailed It
By Stephanie Topacio Long
Nicola Coughlan Addresses 'Bridgerton' Season 3 Backlash
By Sam Ramsden
Get Even More From Bustle — Sign Up For The Newsletter