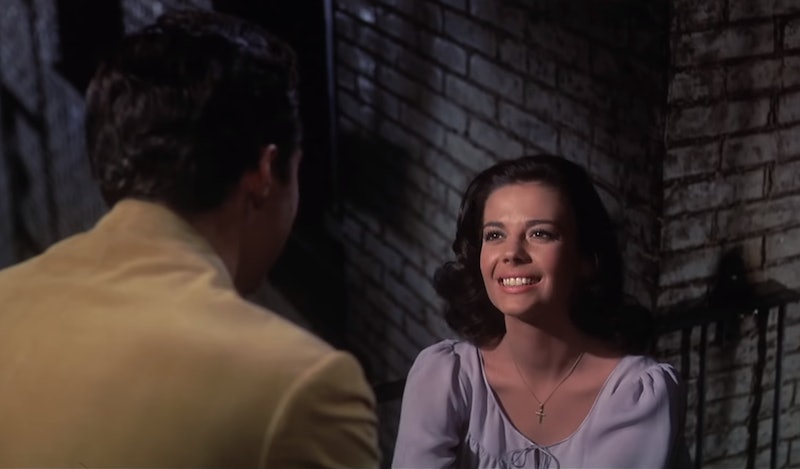 She may be a 17-year-old high school student, but this up-and-coming actor is about to take on the world's stage in a role she's destined for. The West Side Story remake cast its Maria, teenage theater actor Rachel Zegler, according to Variety. After responding to Steven Spielberg's casting call last year, Zegler scored the role of a lifetime and she's totally deserving of it, both personally and professionally.

The Colombian-American teen played Maria in a 2017 production and her tear-inducing final monologue, posted on her Youtube page, shows what she's capable of. From the start, Spielberg and his team were dedicated to finding fresh Latin talent, putting out a casting call last January seeking Latinx actors to play iconic characters Maria, Anita, and Bernardo specifically. After 30,000 submissions were received, according to Variety, Zegler won the crew over with her rendition of "Tonight" and "Me Siento Hermosa" ("I Feel Pretty").

Making the announcement on her Instagram, Zegler explained how humbled she is to take on a role that means so much to her. "When I played Maria on stage a few summers ago, I never could have imagined that I'd be taking on the role again in Steven Spielberg's West Side Story," she wrote. "As a Colombian-American woman growing up in this day and age, strong roles like Maria are so important."

The actor further expressed how honored and ready she is to take on such a significant role in pop culture to Variety. "I am so thrilled to be playing the iconic role of Maria alongside this amazing cast," she said. "West Side Story was the first musical I encountered with a Latina lead character... I am humbled by the opportunity to play a role that means so much to the Hispanic community.”

By the looks of her Youtube page alone, Zegler's dedication to theater is astounding. Her channel, with over 80,000 subscribers, is dedicated to showing viewers what life is like in the theater grind. "Welcome to the life of a theatrical mess named Rachel Zegler," reads her channel's description. It's clear that theater is her true passion. She continues, "I am incredibly infatuated with theatre, musicals, and the people who help them to happen!! Follow me around as I show you how much I love what I do, and how I manage to do it all while juggling my entire life." Pretty impressive for a high school student.

In a statement to Variety, Spielberg elaborated on why Zegler was the right choice for a role thousands were fighting for. "When we began this process a year ago, we announced that we would cast the roles of Maria, Anita, Bernardo, Chino and the Sharks with Latina and Latino actors," the director said. "I'm so happy that we've assembled a cast that reflects the astonishing depth of talent in America's multifaceted Hispanic community. I am in awe of the sheer force of the talent of these young performers, and I believe they'll bring a new and electrifying energy to a magnificent musical that's more relevant than ever."

The upcoming remake is inspired by the original 1957 Broadway musical (inspired by Romeo and Juliet), which was also the inspiration for the Oscar-winning 1961 film starring Natalie Wood as Maria. Zegler will star opposite Ansel Elgort as Tony, and alongside Broadway vet Ariana DeBose as Anita, and Tony-award winning actor David Alvarez as Bernardo. Additionally, Rita Moreno, who won the 1962 Oscar for Best Actress in a Supporting Role for her show-stopping work as Anita, will join the film as an expanded version of Doc.

With so much hard work ahead, Zegler's story is undoubtedly an inspiring one. And it's only just beginning.