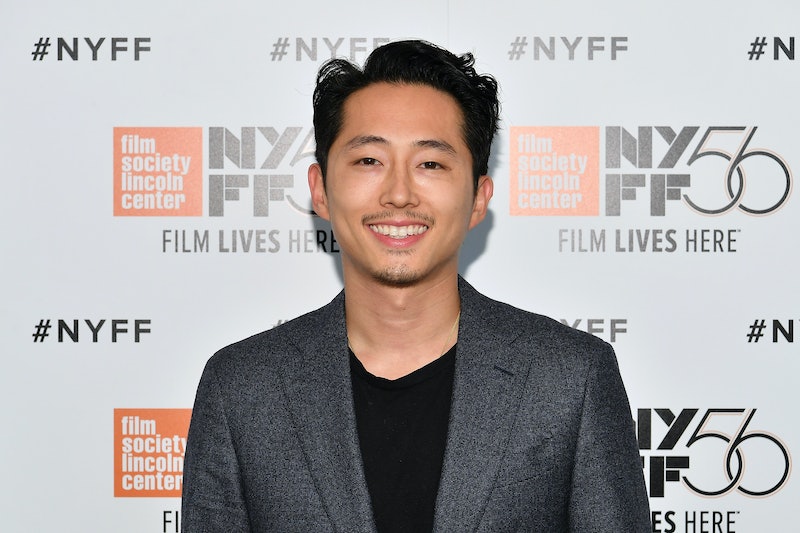 A Walking Dead favorite is about to enter the fifth dimension. Steven Yeun will appear in The Twilight Zone reboot from Jordan Peele. It'll be Yeun's first TV appearance since being brutally killed off The Walking Dead in the Season 7 premiere. Let's just assume this new role is #JusticeForGlenn and a gift for all those Steven Yeun fans out there who missed seeing him on the small screen.

According to The Hollywood Reporter, Yeun will star in an episode called "The Traveler," which sounds mysterious and right now, very much is. In the casting announcement for the anthology series, which will stream on CBS All Access next year, there was no other information about his episode. So, for right now, fans will have to imagine just how good this one's going to be because clearly, it will be.

Luckily, there has been a bit more information revealed about Peele's take on The Twilight Zone. Like the original, each episode will tell its own story and might even take some inspiration from the first version of the show.

Parks and Recreation's Adam Scott will also appear on The Twilight Zone in an episode called "Nightmare at 30,000 Feet," which is reportedly a reimagining of one of the most famous episodes of the show, "Nightmare at 20,000 Feet." In that classic Twilight Zone episode, which stars William Shatner as a man who swears he sees something on the wing of his plane that no one else can see.

Vulture reported that CBS announced Sanaa Lathan will appear in a new take on another Twilight Zone episode called "Rewind," which was about a gambler who finds a tape recorder that allows him to go back in time. At this point, Lathan would have to go back in time to find a recorder that still uses tapes so it'll be interesting to see how or if Peele updates the technology in this one.

For Yeun though The Twilight Zone might give him a chance to rewrite his TV ending to make it a much happier one. In an interview with Vulture last year, Yeun said that Glenn "never got his fair due" on The Walking Dead. "I loved being on that show, he said. "Internally, it was incredible. Externally, it was tough sometimes because I never felt like he got his fair due."

Yeun told Vulture he always felt like no one really knew how to approach his character. "It's why his death hurt people so much," he said. "They didn’t know what Glenn was, and only in his death did they realize, 'Oh, that’s what he was. That’s the connection I had, and that’s why it hurts me so much to see him die.'"

While the Twilight Zone isn't usually a place you want to get stuck, Yeun's new role will allow him to show audiences why they should get to know his character before its too late. Even if they'll be peeking through their fingers to do so.