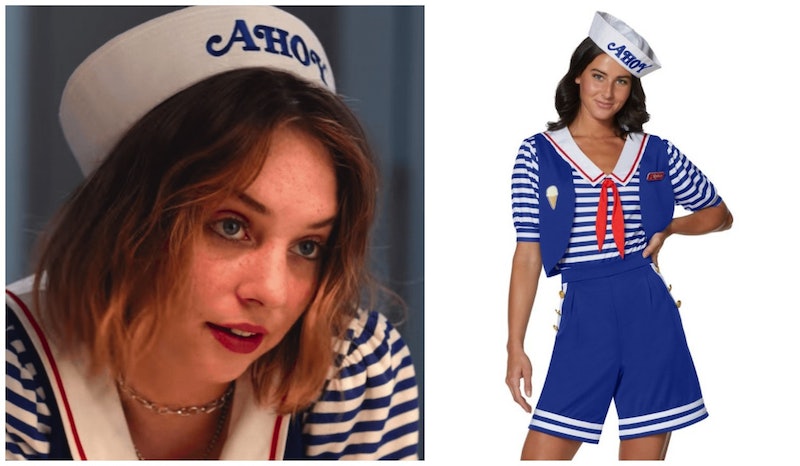 Stranger Things has hit it out of the park in virtually every way possible ever since the very first season debuted in 2016 — and its costume design in particular has become so iconic that lookalike versions of each character’s looks from season to season have become a mainstay of Halloween costume plans everywhere. And this year? Thanks to the many Stranger Things Scoops Ahoy Halloween costumes that are already appearing on shelves, you can dress up as Season 3 Steve or Robin for Halloween. Grab yourself a USS Butterscotch, don't forget your ice cream scoop, and let's get sailing!

A lot of work went into developing the uniforms for the Starcourt Mall’s signature ice cream shop, according to Stranger Things costume designer Amy Parris; after all, Steve and Robin (whose last name is Buckley, by the way — just in case you were curious) spend pretty much the entire season in them, so the Scoops Ahoy uniforms needed to do a lot of heavy lifting. “[The Duffer brothers] knew they wanted the outfit to be goofy-looking, but something that was appealing to look at… the whole season,” Paris told E! News recently. “So I think we did a really good job of bridging the gap of like, making [Steve] kind of embarrassed in the Ahoy hat, but Steve Harrington makes it look really cool,” she continued.

Parris and her team ended up creating a look so instantly recognizable that it’s only to be expected that both variations of the Scoops Ahoy uniform — Steve’s and Robin’s — would be part of this year’s crop of Halloween costumes. In fact, versions of both have already appeared at two of the most notable Halloween costume juggernauts around: Spirit Halloween and Party City. Both retailers’ versions are officially licensed, too, so you can be sure the details are all spot-on.

At Spirit Halloween, Steve’s Scoops Ahoy uniform includes a shirt, a name badge, shorts, and a Scoops Ahoy sailor hat; the shirt measures about 24 inches from shoulder the hem, while the shorts have about a 13-inch rise and an inseam of about 6.5 inches. It’s made of polyester, spandex, and plastic. At Party City, you get a few more accessories: In addition to the shirt, name badge, shorts, and hat, an apron and an ice cream scoop holder are also included. Steve sheds these last two accessories as the season goes on, but if you like to have options, the Party City version may suit you a bit better.

Note, by the way, that shoes and socks aren’t included in either version of the costume — but if you want to add the finishing touches yourself, Steve wears white tube socks and blue tennis shoes. Although it’s not totally clear what brand the shoes are, they look like they have white stripes down the side, which suggests they might be Adidas. As such, a pair of classic blue Adidas Campus shoes should fit the bill. And, I mean, tube socks are tube socks. You can get those anywhere. Here’s a six-pack for around $12. Have fun.

Robin’s uniform, meanwhile, is a little bit different from Steve’s — mostly, according to E! News, “so we didn’t have to be staring at two people wearing the same outfit for the entire season.” Whereas Steve’s shirt has thicker, red stripes, Robin’s has thin, blue stripes; in the place of Steve’s blue overshirt, Robin gets a blue vest; and, compared with Steve’s shorts, Robin’s are “a little more voluminous,” as Amy Parris put it to E! News, as well as pleated in the front. Additionally, Robin’s shirt has puffed sleeves — a very ‘80s detail. Paris noted that these “little subtle differences” keep your eye from getting bored.

The Spirit Halloween version of Robin’s Scoops Ahoy uniform includes a two-in-one vest and shirt, badges and patches to decorate the vest, shorts, and a Scoops Ahoy hat. The shirt is about 22 inches long from the shoulder to the hem; meanwhile, the rise of the shorts is about 13 inches, while the inseam is about eight inches. The costume is made out of polyester, spandex, and plastic. If you’d rather go for a one-piece look, though, there’s also the Party City version, in which the shirt, vest, and shorts are actually all a romper. This version also includes a name badge and a Scoops Ahoy hat.

Again, the shoes and socks aren’t included with either version of the costume, so you’ll have to add those last two pieces yourself if you want to recreate the look down to the last detail. Like Steve, Robin wears a pair of white socks; hers look more like knee socks (try these), but honestly, white tube socks like the kind Steve wears would probably get the job done here, too (and in a sort of DIY way of which I feel Robin would approve). Her shoes, meanwhile, are a pair of red, low-top Chuck Taylors. Don’t forget to grab a Sharpie and doodle all over the toes for the ultimate Robin experience.

Sizing for all of the costumes is unfortunately a bit limited right now; it’s still pretty early, though (JULY! IT’S JULY! OCTOBER IS STILL THREE MONTHS AWAY!), so hopefully a wider range of sizes will become available closer to Halloween itself. In the meantime, though, you can check out all of Spirit Halloween’s and Party City’s Stranger Things costume selection here and here. See you in the Upside-Down!