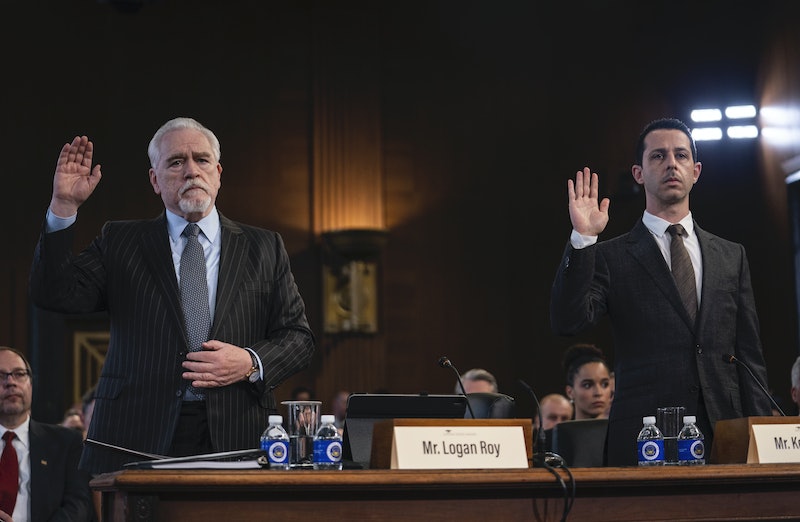 Logan and Kendall have never had the healthiest father-son relationship, but the Succession Season 2 finale found the characters at odds like never before when Kendall, in a surprise twist, pinned the cruise scandal on Logan. The bold move left some thinking that Logan may have been in on Kendall's plan the whole time; however, Brian Cox just debunked the Succession finale theory during a recent interview with Entertainment Weekly, admitting that not even a character as devious as Logan could've seen Kendall's betrayal coming.

"I don’t think they were working together," Cox remarked, when asked about Kendall's surprising actions and whether Logan had secretly been in cahoots with his son the whole time. "He’s not proud of Kendall, it’s a terrible thing that’s happened, but he knows it’s the inevitable thing that has happened, and he understands the inevitable nature of it." Perhaps it's that understanding which prompted Logan to smirk at his son's actions, despite the fact that it could ultimately lead to his undoing.

The look of pride on Logan's face added further fuel to the speculation fire online, leaving fans to believe that Logan had wanted Kendall's treachery to happen all along. But being impressed and being in collusion are two very different things. "Logan puts his finger over his mouth because he wants to see what his son does in this spotlight. This is s— or bust for Kendall. And he s—s, big time!" Cox explained to EW. "In a way, he’s very pleased. It’s a whole new chapter, but at least we know where we stand now: I have a killer!"

Prior to Kendall's press conference where he promptly threw his dad under the bus for the entire scandal, Logan had admitted to his son that he didn't think he had what it takes to run the company — that he didn't possess that killer instinct necessary to get the job done. That's what made Kendall's betrayal all the sweeter, allowing Logan to come to the realization that he was dead wrong on that account.

Cox expanded on the meaning behind that smile in the final moments of the finale in a separate interview with Vulture, explaining why his character was filled with a mixture of emotions. "The smile is him saying, 'Finally, my son is stepping up to the plate, doing what he needs to do to run a business. Finally, he’s the heir apparent to Waystar Royco,'" Cox explained, while adding that Logan has no intention of going down without a fight. "There’s life in the old dog yet! We’ve got quite a journey now. Logan has to reclaim himself. He needs to even the odds."

It's difficult to picture a circumstance where Logan isn't already 10 moves ahead of everyone else, but it seems as though his eldest boy finally got the best of him, at least for the time being. It isn't the first time Logan's appeared to be backed into a corner, though, so hopefully Kendall has a few more tricks up his sleeve for Season 3.

More like this
A New 'And Just Like That' Table Read Pic Confirms A Key Character's Return
By Jack Irvin and Grace Wehniainen
'The Lord of the Rings: The Rings of Power' Revisits Iconic Spots From 'The Hobbit'
By Darshita Goyal
An 'Everything Everywhere All At Once' Star Just Joined The 'Loki' Season 2 Cast
By Grace Wehniainen
Nicola Coughlan Shared A Lady Whistledown Excerpt From ‘Bridgerton’ Season 3
By Grace Wehniainen, Alyssa Lapid and Sam Ramsden
Get Even More From Bustle — Sign Up For The Newsletter