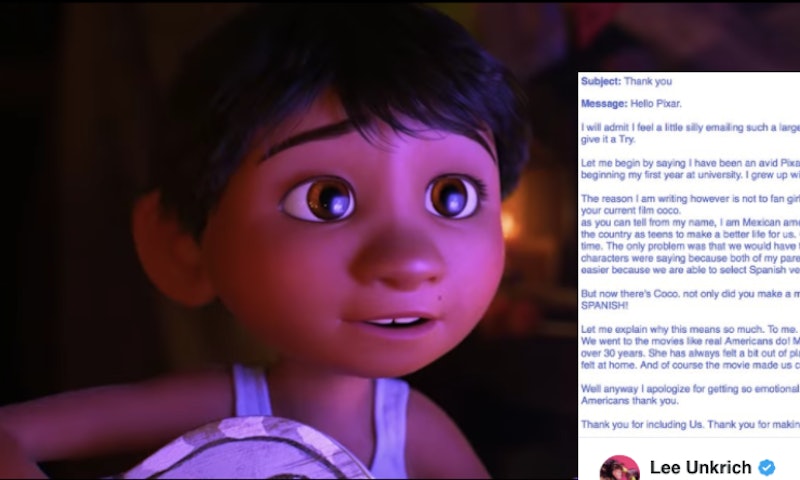 Pixar Studios has long been known for its ability to create animated films that deeply touch the emotions of both children and adults alike. That said, now would be a good time to grab a box of tissues, because this recent fan letter about the movie Coco and its impact on representation is sure to make your heart melt.

The note of thanks, which was sent to the film’s director and screenwriter Lee Unkrich, expresses the gratitude that one moviegoer felt upon being able to take their parents to see and hear the film in Spanish, according to The Daily Dot. The unnamed fan, who's Mexican-American, shared that as a longtime Pixar enthusiast, this is the first time that they were clearly able to see a representation of their culture in a big-screen animation. It was a moment their entire family was able to enjoy, too. The letter reads, in part:

"Growing up my parents and sister used to watch Pixar movies all the time. The only problem was that we would have to pause the movie every 5 minutes to explain to my parents what the characters were saying because both of my parent are not very fluent in English."

As the email moves on, the fan describes the elation felt from the movie, continuing:

"Last night, for the first time in my life, I took my mom to the movies ... my mother had tears in her eyes. She hadn't been to a movie theater in 30 years. She always felt a bit out of place in the states. But last night, she forgot she was not from here. She felt at home."

The letter, which Unkrich shared on his personal Twitter account, certainly speaks volumes about the importance of creating and offering projects that represent the myriad of cultures that make up this world. It's a necessary component that many have sadly not been privy to within their lifetimes. Being able to identify with someone that looks like you on screen is a critical factor in one's growth and validation.

Without proper representation in the media, people of color have long found themselves searching for someone who they can relate to on-screen, which was nearly non-existent until now. As people, both inside and outside of the film industry, continue to push for the creation of more positive roles for people of color, Hollywood has been forced to answer and has finally begun to shift slightly in the proper direction in terms of diversity in film and television.

Pixar, a subsidiary of Disney, seems to have totally gotten the message, as they appear to be at the forefront of change when it comes to the release of their most recent animated film, Coco. The movie, which follows the tale of 12-year-old Miguel, a young boy who dreams of one day being a musician like his great-grandfather and idol, Ernesto de la Cruz, offers fans a much-needed offering of Mexican heritage. During Miguel's exciting journey, he finds himself amidst the traditional Mexican holiday of Día de los Muertos as he uncovers a myriad of details surrounding his family's history.

Vanity Fair dubbed the movie as a "love letter to Mexico," a narrative which is particularly important during the current political state of our country and its leaders. It's safe to say that Coco offers a message of unity that the entire world is ready to see and hear. Premiering in theaters this past Thanksgiving weekend, Daily Dot indicated that the film was met with rave reviews and Rotten Tomatoes approval rating of 96 percent. It was also recently named the Best Animated Feature by the National Board of Review, according to Deadline.

The author of the heartwarming letter to Disney-Pixar couldn't have have been more poignant in their outpouring of appreciation for the lovable film as the letter turn especially emotional in the closing. "Thank you for including Us," the note read. It concluded, "Thank you for making my mommy feel like she belongs. Thank you."

As a minority, it can often feel like you've either been forgotten or don't matter in this world, especially when even your sources of entertainment seem to leave you by the wayside. While the change in Hollywood is not as expeditious as it should be, it's certainly awesome to more real world diversity being represented on-screen.

More like this
Everything To Know About Marvel’s 'Thor: Love And Thunder'
By Grace Wehniainen
Sadly, 'Fantastic Beasts: The Secrets Of Dumbledore' Isn’t Streaming — Yet
By Arya Roshanian
Laura Dern Said “Cultural Awareness” Made Her Rethink This 'Jurassic Park' Fact
By Grace Wehniainen
The 'Hocus Pocus' Sequel Finally Has A Release Date & It Makes Total Sense
By Shannon Barbour and Radhika Menon
Get Even More From Bustle — Sign Up For The Newsletter