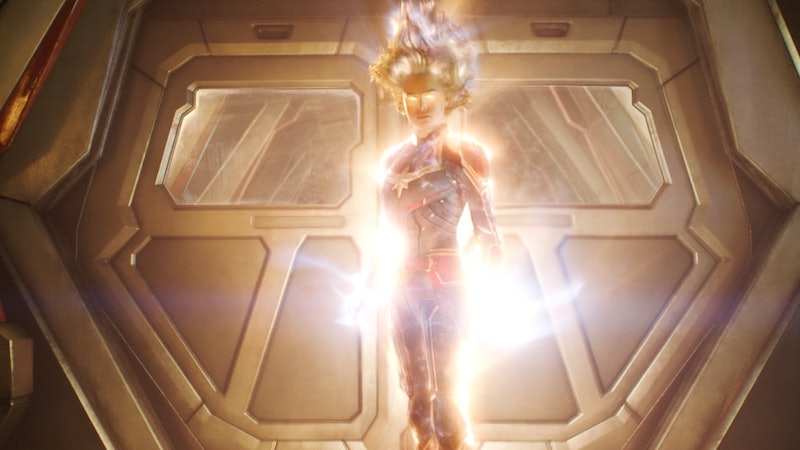 Just like in the rest of Hollywood, superhero film representation is extremely lacking for people who are not straight, cis, white men. But it's not just a lack of on-screen diversity: Behind-the-scenes production is also not nearly as diverse as it could be. And though women — especially women of color — are finally getting more representation in sci-fi and superhero films, it should still be no surprise: a new report examining 10 years of women's representation in superhero films from the Women’s Media Center shows that, in terms of diversity in these types of films, we still have work to do.

In collaboration with BBC Media, the Women’s Media Center study shows that 55% of major sci-fi and superhero films have featured a man as the solo lead over the last decade. And, the study found, 97% of sci-fi and superhero films over the last 10 years were directed by men. In a press release emailed to Bustle, Pat Mitchell, chair of the board of directors of the Women’s Media Center, said that “it’s important that television and film provide an abundance of roles and role models for diverse girls and young women.” But, the study shows that sci-fi and superhero films have been falling short of this kind of representation both on and off screen. As significant as who is in front of the camera, though, is who is allowed behind the camera. The study found that 88% of directors, producers, writers, and editors for these films were men.

The study also refutes the notion that films featuring or directed by women, especially women of color, won’t succeed in the box office. Captain Marvel earned over a billion dollars in the box office. Black Panther also destroyed previously-held Marvel movie records, becoming the highest-grossing Marvel film in its first week. And the new Star Wars franchise — featuring Black and Latinx men as leads, alongside a white woman lead and Kelly Marie Chan, a Vietnamese-American woman, rising as Rose Tico — also were greeted by audiences with major success. Wonder Woman — the first superhero major studio film directed by a woman and featuring a white woman lead — made over $412 million in the box office.

Still, as women in sci-fi and superhero films move higher, further, faster, it’s important to use the momentum of these incredible films to continue to effect change. Looking back at how superhero films are increasing in terms of representation is incredibly important — lest anyone be tempted to say that the fight is over simply because white women superheroes have broken the box office. Superhero films centering — and produced, directed, written, and edited by — women of color, including queer women of color, will hopefully be on the rise in the next 10 years. And this will only dramatically increase the quality of superhero films out there. Because as young adult fantasy author C.B. Lee said of queer women of color at San Diego Comic Con, “Being able to see ourselves in the future gives us more power in the present.”