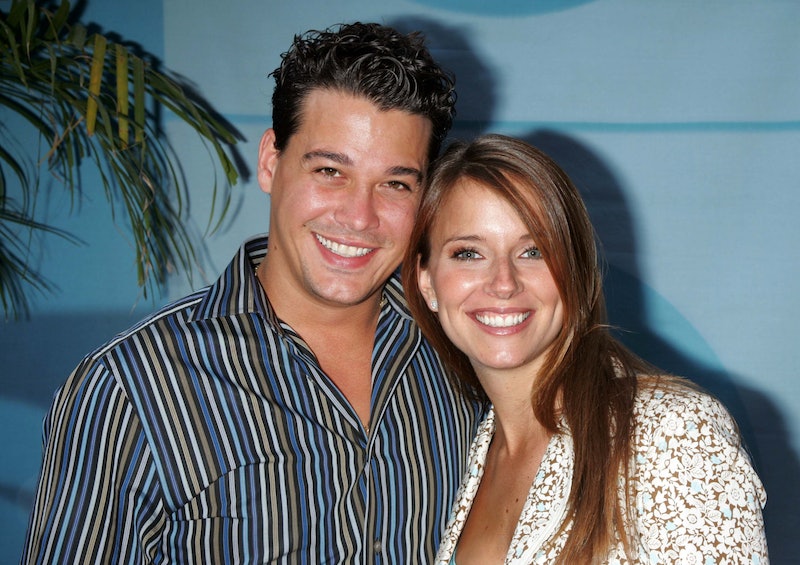 After meeting and falling in love during filming for Survivor's All-Star season in 2003, Boston Rob and Amber Mariano are returning to the show for Winners at War. They'll start the season in separate tribes, but ultimately, it doesn't matter which team they're on. If one of them wins, they'll both take home the $2 million final prize.

Since meeting on the show 17 years ago, the couple has shared some major relationship milestones — some on TV and some off. Amber (neé Brkich) first appeared in the second season of Survivor while Rob competed on Season 4. They faced off together in Season 8 (which aired in 2004), but they also fell in love. Before it was announced that Amber won during the live reunion show, Rob proposed to her.

After that, they moved to Pensacola, Florida, and on April 16, 2005 — less than a year after they got engaged — Amber and Rob got married in the Bahamas. Befitting of how they met, their wedding was filmed for the May 2005 special Rob and Amber Get Married.

So began a number of reality TV stints for the couple, who competed on The Amazing Race twice (coming in 2nd and 8th place, respectively). They also had their own show — Rob and Amber: Against the Odds — for one season in 2007, which followed Rob as he pursued a career as a professional poker player in Las Vegas.

After that, they had four daughters — Lucia Rose in 2009, Carina Rose in 2010, Isabetta Rose in 2012, and Adelina Rose in 2014 — while Rob went back to the entertainment field. He hosted the History Channel's Around the World in 80 Ways and appeared in Will Ferrell and Zach Galifianakis' 2012 movie The Campaign, as well as made a number of appearances on Survivor: he popped up in Heroes vs. Villains in 2010, won Redemption Island in 2011, and served as a mentor in 2019's Island of the Idols.

Amber, meanwhile, hasn't been on Survivor since she won in 2004. "I'm one of the luckiest people to have ever played this game. ... I not only won the show, but I fell in love and met my husband on the show. Nothing can top that, which is why I've been so hesitant to come back all these years," Amber explained to Entertainment Tonight Canada. "But to be asked to come back again with my husband for Season 40, how could you turn that down?"

With Rob being perhaps the most famous of all Survivor contestants, the Marianos are inevitably going to be targeted by their fellow retuning players during Winners at War. But the husband and wife will have each other even if they don't walk away with the big prize again, and even Jeff Probst can't put a price on that.

More like this
The Bachelor’s Christina Mandrell Comes From One Of Country Music’s Most Famous Families
By Brad Witter
Kylie Jenner Clarified How To Pronounce Her Son's New Name
By Jake Viswanath
Nicole & Chris Hinted They’re Still Together After 'Married At First Sight'
By Brad Witter
Jin-young Reflected On His Relationship With Seul-ki After 'Single’s Inferno'
By Brad Witter
Get Even More From Bustle — Sign Up For The Newsletter
From hair trends to relationship advice, our daily newsletter has everything you need to sound like a person who’s on TikTok, even if you aren’t.