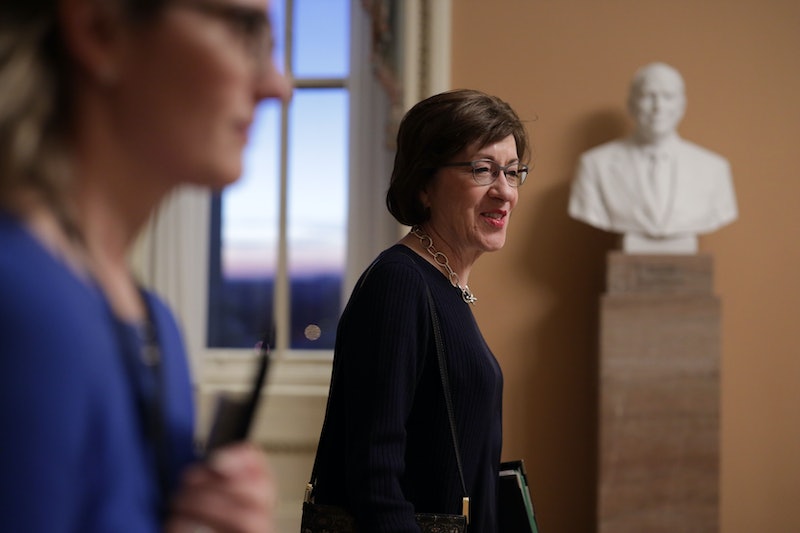 During a PBS interview on Tuesday, Senator Susan Collins said that endorsing Trump in 2020 is a decision she's putting off for now, emphasizing that she's focused on her own re-election campaign. Notably, Collins previously publicly declared that she wouldn't be voting for Trump in a Washington Post op-ed back in August 2016.

Collins discussed Trump's potential re-election bid with PBS NewsHour’s Judy Woodruff on Jan. 29. When the host asked Collins whether she is currently prepared to endorse Trump's re-election campaign, Collins implied that she hasn't really thought about the notion. As the senator told Woodruff:

I'm really focused on my own campaign for 2020 and I really haven't focused on the presidential campaign. So, I'm not prepared at this point to make that decision.

Woodruff then further questioned whether Collins expects to endorse Trump at any point between now and Election Day, "since you're a Republican." In responding, the senator stressed that she has to see how the next year unfolds. As Collins put it:

I don’t know, I’m going to have to see what happens between now and then and look at what his record is. I can’t imagine that I would endorse any of the Democrats who are running right now, but I’m going to focus on 2020 in 2020.

Woodruff concluded her line of questioning on the topic by asking whether the Senator is "leaving the door open to perhaps supporting another Republican" in the 2020 race. “I'm just not focused on it ... right now," Collins told the host. "So I'm neither ruling it in nor ruling it out."

Notably, Collins did not endorse or vote for Trump in the 2016 presidential election. Indeed, on Aug. 8, 2016, she wrote a lengthy article in the Washington Post explaining why she, as a Republican, would not be supporting the presidential nominee for her own party. In the piece, Collins stressed that she believes Trump's actions and rhetoric are discordant with traditional Republican values. As the senator wrote:

I will not be voting for Donald Trump for president. This is not a decision I make lightly, for I am a lifelong Republican. But Donald Trump does not reflect historical Republican values nor the inclusive approach to governing that is critical to healing the divisions in our country.

Collins added that her decision about Trump's "unsuitability for office" primarily stemmed from the fact that she believes he doesn't show respect toward others. "My conclusion about Mr. Trump’s unsuitability for office is based on his disregard for the precept of treating others with respect, an idea that should transcend politics," she wrote in the Washington Post. "Instead, he opts to mock the vulnerable and inflame prejudices by attacking ethnic and religious minorities." The senator further noted in the article that she worried that "Mr. Trump’s lack of self-restraint and his barrage of ill-informed comments" could "make an already perilous world even more so."

It remains to be seen whether Collins will ultimately choose to endorse Trump in 2020, especially considering the strong public stance she took against his candidacy in 2016. Moreover, it will be particularly notable to see how the fact that she's engaged in her own re-election bid will influence the senator's decision about whether to support Trump.