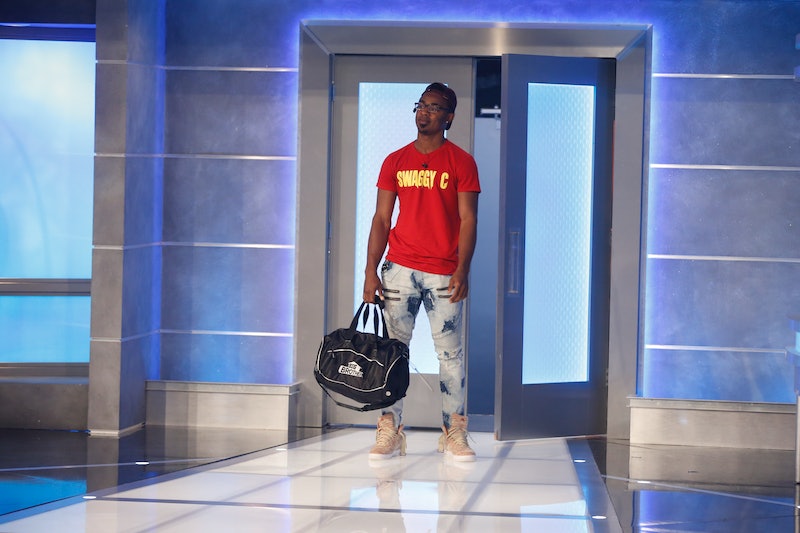 Swaggy C made it clear that he wanted to go down as a Big Brother legend, but his reign in the BB house has ended. Despite pulling out all the stops to try and save himself, Swaggy C has been evicted from Big Brother, and fans are not pleased.

Swaggy came out of the gate strong, winning the opportunity to save eight members of the house, including himself, from being evicted for the first week. Swaggy's rising social game and physical prowess made him too big of a threat in the eyes of his competitors, and Tyler's plan to backdoor him came to fruition in the second eviction of the summer as he left the house with his stuff, except for a few "Swaggy C" shirts that he left behind for his fellow houseguests to wear. Swaggy C may no longer be in the house, but he's left a huge impact on the Big Brother house and has resonated with Big Brother fans. During his eviction the Big Brother live crowd roared as he threw his self-branded shirts into the audience, and the home viewing audience seems to share this love for Swaggy.

Leading up to his eviction, Twitter had been abuzz with people tweeting out support for Swaggy C for a variety of reasons. Whether people valued Swaggy's quest to make the show more entertaining like BB14 alum Dan Gheesling, while others appreciated the fact that Swaggy seemed to be more genuine than anyone else in the house, despite playing a heightened version of himself. Some people, like Elissa from BB15, just miss that someone with a name as fun as Swaggy C won't be in the house anymore. Some others found Swaggy to be annoying, or simply didn't care for him, but what's clear is that Swaggy inspired a huge reaction from Big Brother viewers one way or another.

Swaggy's eviction also seemed to split the house, who voted 8-4 in favor of sending Scotty home. While Swaggy's closest allies – Rockstar, Hayleigh, Faysal, and his showmance Bayleigh – all voted for him to stay, one houseguest in particular caught the attention of viewers for seemingly going agianst his word. When Scottie entered the diary room to cast his vote, sporting one of Swaggy C's self-branded t-shirts, Scottie explained that he wasn't "anyone's goon," and voted to evict "Chris."

During his exit interview, Swaggy revealed that Scottie not only wore his shirt, but that it was Scottie's idea for Swaggy's supporters to wear his shirts on eviction night – further twisting the knife of Swaggy's eviction. Swaggy was so sure that Scottie had voted for him that he presumed that Hayleigh — who didn't wear one of this shirts — had betrayed him and blew her off on his way out of the house. The same Big Brother fans that took to Twitter to show their support quickly turned on Scottie, and called out his cold-blooded nature.

It's impossible to know, but it's likely that the response to Scottie wouldn't have been so negative had Swaggy C not been so beloved by fans. Luckily for those fans, there's a chance that Swaggy C may get his revenge on Scottie. A suggestive tweet from Steve's twitter account hints that the season's first evictee is not yet back in the real world – which means the season's early evictees could be getting sequestered for the opportunity to battle their way back into the Big Brother house. This was the same method that fan favorite Cody from Big Brother 19 used to return to the house after his first eviction, and Victor from Big Brother 18 managed to win his way back into the house two separate times during his season — two competitors who, much like Swaggy, had considerable talent when it came to physical competitions. He may have been evicted from the Big Brother house, but there's hope yet that Christopher Williams could return and dominate the season.

More like this
'Big Brother' Is Already Looking For New Houseguests To Compete In Season 25
By Brad Witter
What’s New On Netflix: Ana De Armas’ 'Blonde' & A Nick Kroll Special
By Arya Roshanian
Everything To Know About 'RHONJ' Season 13
By Brad Witter and Jake Viswanath
Here's The Full List Of Zach's Confirmed & Potential 'Bachelor' Contestants
By Kadin Burnett and Grace Wehniainen
Get Even More From Bustle — Sign Up For The Newsletter