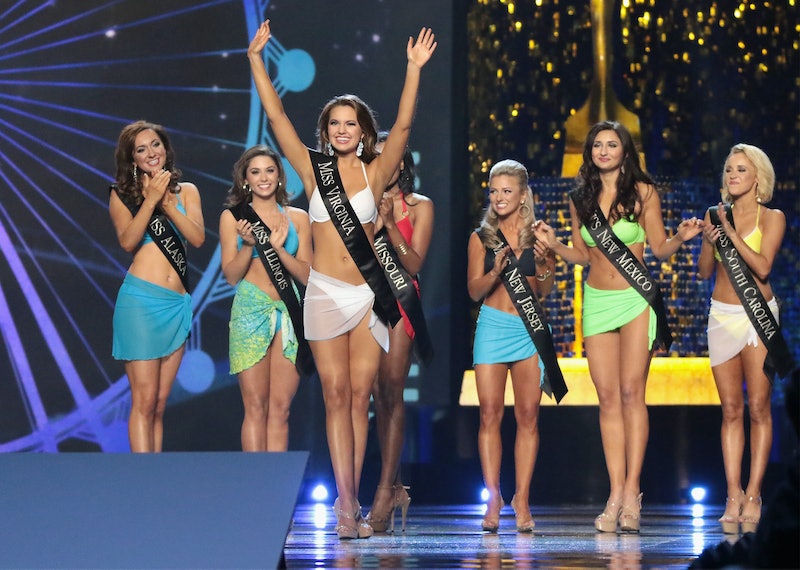 When I heard Gretchen Carlson, the chairwoman of the Miss America board of directors, announce on Good Morning America on June 5 that Miss America will eliminate its swimsuit competition and open it to "all shapes and sizes," I wasn't as excited as one might expect a 32-year-old fat feminist to be. While it's certainly a well-intentioned evolution for the near-century old competition that was originally billed as a "bathing beauty revue" all the way back in 1921, the idea that the swimsuit competition would be eliminated in tandem with a push for inclusivity rubs me the same way my swimsuit does after a long day of frolicking on the beach. That is, all goddamn wrong.

Yes, a procession of bikini-clad, conventionally attractive women parading in front of a panel of judges who assess them on looks feels antiquated and creepy. Yes, events like the swimsuit competition are why I, a person who loves costumery, frippery, and female excellence, do not f*ck with pageants of the non-drag variety. And yes, theoretically I should be thrilled with the idea that Miss America is moving away from an appearance-based competition model, because I know very well that the women involved in these pageants have plenty more to offer than their bodies.

However, why can't a push for more inclusivity — not just size inclusivity, but representation for all races, gender identities, and ages — happen without the elimination of the swimsuit competition? Why can't Miss America keep every single string on its bikinis, but also tie them around fat bodies, transgender bodies, or aging bodies instead of just thin, cis-gender, and (mostly) white ones?

I know what you're thinking: This argument could, through some lenses, rest squarely on the shoulders of patriarchal oppression and the continued objectification of women. A fat body in a bikini before a panel of judges is still a body being judged, right? Shouldn't we want to remove the idea of appearance-based objectification full stop?

In an ideal world, yeah. Arguing that more people be objectified and judged for their appearances feels slightly warped, even to me. But for the sake of argument, what does it mean to objectify a body when the criteria for objectification and "acceptable" beauty no longer exists? In Miss America's current state, one that exclusively extols young, thin women, removing the swimsuit competition is seen as a necessary step towards putting the contestants forth as complete, complex human beings rather than just "good" bodies.

But if all — and I mean all — kinds of bodies were represented and celebrated and the idea of a "good" body no longer existed, how could the mere presence of a bikini sabotage that message? Fat, queer, and old people wear bikinis, too — and from personal experience, I can say we love the hell out of it. In fact, many of us would not think twice about taking the stage in one. What if we got to join our conventionally attractive peers on an equal playing field and demand that our bodies be evaluated and awarded as beautiful? Instead of covering women's bodies for the sake of progress, why not let more versions of those bodies take the stage and shine?

Miss America wants to send a message that says, "We no longer judge conventionally attractive women on their appearances." That's definitely worthwhile, and I can only hope they succeed in making the competition more inclusive overall — and if they don't, I'll definitely be ready to do away with the pageant situation altogether. For me in this moment, though, a more interesting move would be to put diverse, trans, fat-as-hell and old-as-sin bodies on the stage in bikinis alongside their conventionally attractive counterparts and say, "We're giving all of these bodies an equal chance to be judged, because they're all f*cking beautiful." At this point, why the hell not?

More like this
Androgynous Formal Wear That Will Make You Feel *So* Fancy
By Megan Lasher
Help! I'm Not Getting Any Attention On Dating Apps. What Can I Do?
By Sophia Benoit
An Honest Review of MeUndies Boxers, According To A Non-Binary Person
By Megan Lasher
Stormzy Made A Passionate Speech About The Importance Of Diversity
By El Hunt
Get Even More From Bustle — Sign Up For The Newsletter