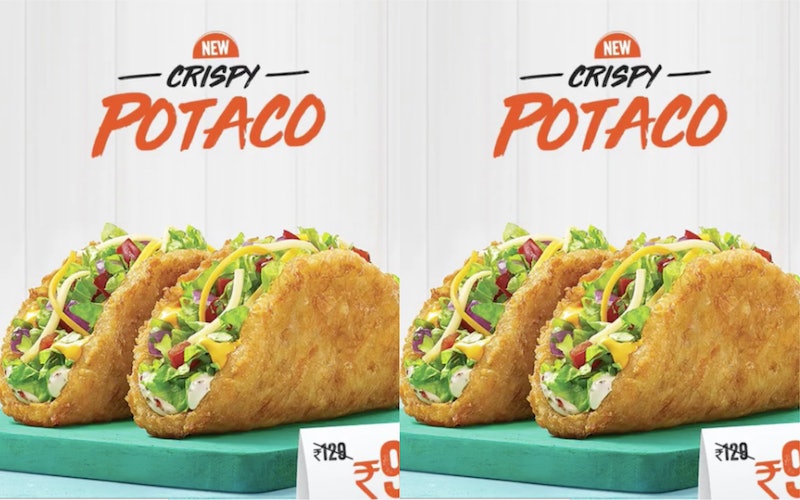 It is hard to improve on perfection, particularly in cases when perfection means tacos. Few foods even come close to the level of deliciousness tacos possess. Something about the marriage of flavors, temperatures, and textures just makes eating a taco a perfect culinary experience. But, in India, a recognizable international Taco chain is looking to change things up a bit. According to an Instagram post June 19, Taco Bell's locations in India will begin serving a taco with a shell made from hash browns. Look out world, the Crispy Potaco (potato taco) from Taco Bell is about to take the internet by storm, and make you super jealous.

Per Delish, the Potaco is a game-changer, as it foregoes the classic tortilla altogether for an outside shell made completely of potato. The potato "shell" is not ~technically~ hash browns, but what are hash browns if not just crispy fried potatoes?

The Potaco is vegetarian, containing lettuce, fiesta salsa, cheese, and "signature sauces." The snack sells for 99 rupees (around a $1.25 in US dollars). The promotional video indicates Taco Bell is using the hashtag #MAKEPOTATOGREAT to advertise the meal. But that is a little misleading, as it implies potatoes are not already great.

While a potato-encrusted taco is undoubtedly revolutionary, it aligns with a number Taco Bell's recent releases. You may recall the legendary nacho fries that graced palates for a brief time in January of this year. In fact, the introduction of Nacho fries was the biggest debut in Taco Bell history. To create them, Taco bell took classic french fries, and spiced them with secret "Mexican seasoning" that one can only assume is similar to taco seasoning. When Bustle sampled some, tasters reported notes of "cumin, chili powder, paprika, and maybe some oregano, garlic, or onion powder." The fries are served with a generous side of melted cheese, ideal for drenching (like any good nacho is).

Fries can be ordered plain, or served Supreme or Bell Grande. Extras include the addition of more fries, taco beef, guacamole, pico de gallo, more nacho cheese, and sour cream. A Supreme size will set you back $2.49; while the Bell Grande sells for $3.49. Since everything tastes better fried (potatoes especially so) why not incorporate fried potatoes into both your main course and side? Taco Bell appears to encourage it.

In terms of atypical taco jackets, the Potaco is not the chain's only recent rollout. The Wilder Naked Chicken Chalupa swaps out a tortilla for a jacket of fried chicken, and comes with everything the original Naked Chicken Chalupa does, with the addition of a new smoky hot sauce called Wild Sauce. If you're a fan of more flavorful fare, this is a dish not to be missed.

The original Naked Chicken Chalupa disappeared from menus for a time, but returned in late 2017. Seeing as the Wilder version was added to the menu around six months after the original's long-awaited return, it is safe to assume customers are not missing the tortillas from their chalupas (or tacos!) A Wilder Naked Chicken Chalupa will run you $2.49 a pop, or $5 in a box that also includes a regular Naked Chicken Chalupa, a Doritos Locos Taco, a Crunchy Taco, and a medium-sized drink.

As mentioned above, the Potaco is currently only available in India. But, that doesn't mean United States-based Taco Bells will never see it— it stands to reason one day you may be able to order a Potaco to go along with your Nacho Fries. In the meantime, add some Nacho Fries to the insides of a Chicken Chalupa next time you visit The Bell. The combination will give you a hint as to what a Potaco tastes like, even if they are thousands of miles away.