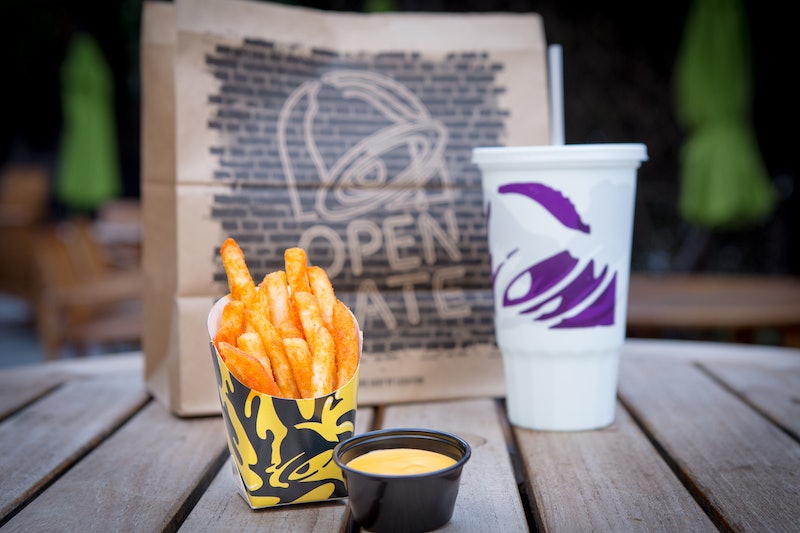 By now, you’ve probably heard the news: Nacho Fries are coming to Taco Bell on Jan. 25, and enthusiasts of both fried potatoes and spicy, melted cheese have never been happier. Of course, the announcement about the new menu item has prompted curiosity about what exactly is in the Taco bell nacho fries. Well, good news: I have answers for you. And the short version is, tastiness. Lots and lots of tastiness.

Taco Bell began testing what would become the hallowed Nacho Fries of today during the spring of 2017, appearing only at some locations in West Virginia and Bakersfield, Calif. However, that wasn’t the first time that fries entered the fast food chain’s arena — in 2016, a seasoned fry option was spotted by Brand Eating at least one location in Irvine, Calif. — nor would it be the last: A test for a variety of French fry-stuffed burritos — Taco Bell’s take on the San Diego specialty known as a California burrito — began in West Virginia at the end of 2017, as well.

Of course, none of those tests helped those of us who didn’t live in the locations in which they were being carried out; we were left sad and French fry-free. The nationwide addition of Nacho Fries to the menu, however, does — and starting on Jan. 25, 2018, they can be yours for a mere $1. According to a press release, they’re part of Taco Bell’s grand scheme to expand their selection of $1 menu options, and, well… that’s a scheme in which I’m willing to participate.

Not sure if you’re ready to take the plunge? Well, maybe knowing what’s in ‘em will help. Here’s what you can expect to find in an order of Taco Bell Nacho Fries: