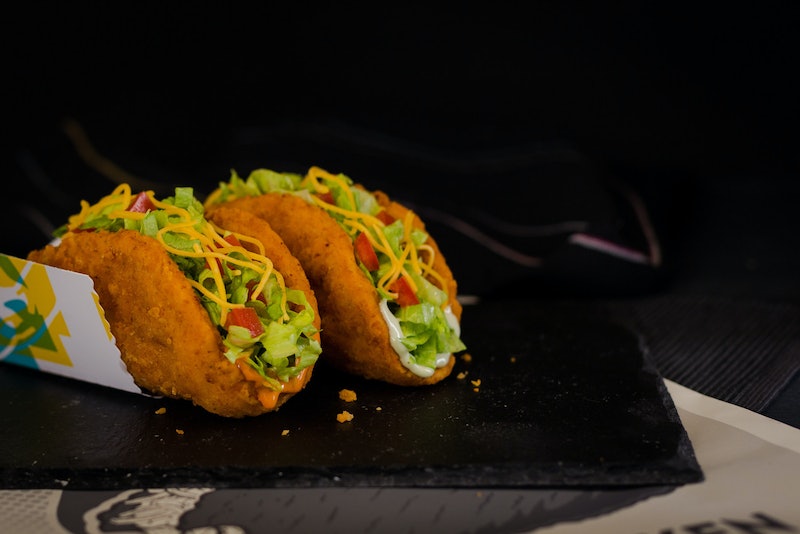 Few things are certain this day and age. A topic that has been the center of much debate in the food world is how one defines a sandwich. A few years back an untraceable source threw the question out into the ether. Once it spread around the internet, everyone had an opinion. Finally, the National Hot Dog and Sausage Council weighed in (yes, really) with a pretty vague answer. Maybe this was all a distraction from the real question: is a Taco Bell Naked Chicken Chalupa still a chalupa? Unclear — but Taco Bell just announced that after pulling the item from its menu in 2017, the Naked Chicken Chalupa is not only making a menu comeback, but that they'll offer a spicier version of it as well.

The new flavor — the Wilder Naked Chicken Chalupa — comes with everything the original does, with the addition of a new smoky hot sauce called Wild Sauce. It is perfect for those who crave a bit more heat from their Taco Bell fare. Both versions of the chalupa will be available in Taco Bells nationwide starting on Thursday, May 10, in what's bound to be a ~wild~ ride — you'll be able to order them a la carte for $2.99 a pop, or for $5 in a box that includes a Naked Chicken Chalupa, a Doritos Locos Taco, a Crunchy Taco, and a medium-sized drink, according to their press release.

Unfamiliar with the yumminess that is a chalupa? According to Cooks Info, the word chalupa loosely translates to "little boat." Chalupas are traditionally made of masa (cornmeal dough). The dough is formed into a canoe-like form and deep fried, then filled with meat and toppings.

Well, Taco Bell's "naked" rendition of a chalupa eschews the dough altogether, using a crispy chicken shell instead of the traditional one made of masa. It is filled with lettuce, tomato, cheese, and is finished with avocado ranch dressing. So, in a way it is kind of like an inside out chalupa. Kind of.

To call those who love Taco Bell mere fans would be a gross understatement. It is one of very few fast food chains that has attracted a cult-like following. Hungry junk foodies of all ages and diets flock to the the Tex-Mex chain at all hours for its outlandish takes on Mexican comfort food. There's even a longstanding vegan menu hack you can use on most items (no meat, add potatoes, make it fresco). The chain's expansive menu features old classics like burritos, tacos, and quesadillas, Fans of its unique, lime-flavored, Mountain Dew Baja Blast was so popular, people have even launched petitions since it was taken off the menu.

But nowadays, simple classics rarely do the trick; it's all about remixes and mashups. Luckily, Taco Bell has, in fact, been on the forefront of the mashup trend. Back in early 2012, when the Doritos Locos Taco was added to the chain's menu, nothing like it had ever been introduced before. According to Fast Company, the chain sold over 450 million Doritos Locos Tacos in the first year following its release.

Since that game changer, Taco Bell has introduced a number of other mashups including a Cheetos Crunchwrap Slider and a burrito containing spicy Pop Rocks. Earlier this year it debuted both a Skittles Strawberry Freeze and Nacho Fries.

Taco Bell has rightfully earned its spot as fast food master of mashups. Judging by the demand to bring it back, the Wilder Naked Chicken Chalupa might just be among their best — y'know, Baja Blast notwithstanding. Who knows? Maybe in the future, Taco Bell it'll be able to do something about the great American Dunkaroo drought, too (brb, emailing their corporate team now).