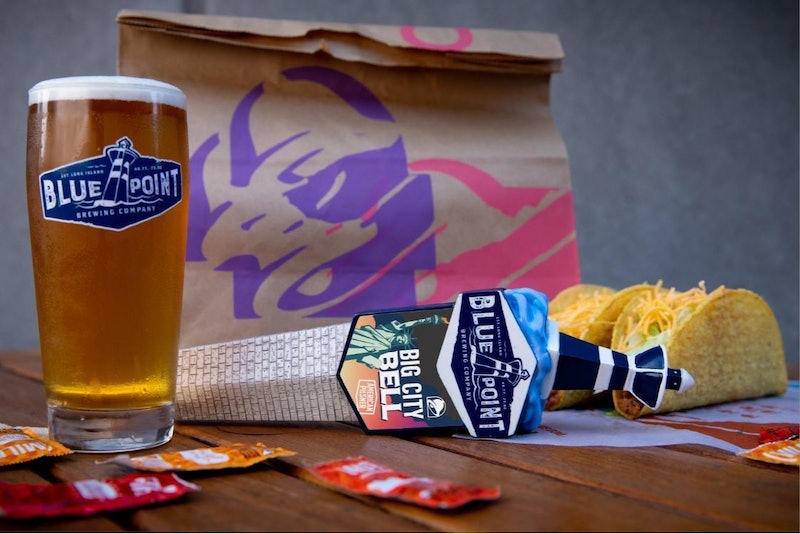 Excellent news on this chilly December day, Taco Bell fans: Three new Taco Bell Cantinas are coming to New York — and with them will come a variety of tasty treats you won’t be able to get anywhere else. For example, the 500 8th Ave. Taco Bell Cantina will boast a new Cantina Nachos menu, Taco Bell’s take on seven-layer dip, and a ton of new boozy Twisted Freezes. Live mas, indeed.

Taco Bell’s Cantina concept was first announced in 2015. At the time, it wasn’t even called Taco Bell Cantina; all we knew at the time was that different kind of Taco Bell was set to open in Chicago’s Wicker Park neighborhood with “a completely new urban restaurant design,” according to a Yum! Brands spokesperson — and, possibly, a liquor license. By the time the Wicker Park location opened up, the new breed of restaurant had become officially known by the Taco Bell Cantina moniker… and, yes, it was confirmed that Cantinas would sell alcoholic beverages.

The Cantina concept has grown steadily in the years since the Wicker Park Cantina’s opening — and in August of 2018, Taco Bell announced that the company was planning on opening a number of new Cantinas by 2022. Three of those restaurants were slated for New York, where six other Cantinas already exist. The goal was to open those three locations by the end of the year, and guess what? It’s… almost the end of the year. As such, two of the three location — the ones located at 840 8th Ave. and 224 7th Ave. — are already open, with the third, based at 500 8th Ave., opening quite soon indeed.

Typically, the Cantina menus have all of the same stuff a regular Taco Bell has — and then some. Shareable items not present at standard Taco Bells are available, for example, like the “mini quesadilla nachos” the Las Vegas Taco Bell Cantina has. Additionally, you can add alcohol to any Freeze to make it a Twisted Freeze, or just order a beer or a Taco Bell Sangria (if, y’know, boozy slushies aren’t your thing). Accordingly, we can expect the new Cantinas to boast similar perks — but according to a press release, the 500 8th Ave. Cantina in particular will go above and beyond.

Among the bells and whistles the 500 8th Ave. Taco Bell Cantina will feature are more spots to order than any other Taco Bell (the idea is for the place to be able to keep large volumes of diners moving through at a reasonable pace), a custom mural by New York based-artist Greg Lamarche, a merch store, and the ability to control the music played in the restaurant via your phone (through an app, I presume). But to be honest, I’m less excited than all that than I am about the new menu items — because not only are they, y’know, new, but also, you won’t be able to get them anywhere else. That’s fairly notable, as far as fast food restaurants go.

Per the press release, the 500 8th Ave.’s Cantina Nachos menu will include items like a Chicken Enchilada Nachos Box, a Fiesta Taco Salad Nachos Box, and a Steak & Cheddar Nachos Box, with each item priced at $5.59 apiece. Additionally, a new 7-Layer Dip will be on offer, which I can see being the perfect thing to share with a couple of friends. It’s not yet known what Taco Bell’s 7-Layer Dip will comprise, but typically, the seven layers in a Tex-Mex-style seven-layer dip include refried beans, guacamole, sour cream, various kinds of salsa and/or chopped tomatoes, cheese, black olives, and… well, the seventh layer is actually kind of up to you. It’s sort of a general “pick your favorite toppings” layer, so anything from shredded lettuce to taco meat is fair game.

A bunch of new Freeze flavors will also be available, including a Frozen Mule Freeze and a Part Punch Freeze. Again, we don’t have a ton of detail on these items yet, but their names provide some clues. I’d be willing to bet that the Frozen Mule has a ginger-and-lime flavor profile for example — just like a good Moscow Mule does. The Party Punch, however, is anyone’s guess. Regardless, though, if you’re 21 or older, you’ll be able to add your favorite alcohol to your Freeze of choice.

And lastly, all three of the new Cantinas will have their very own, exclusive beer available.

This isn’t the first time Taco Bell has teamed up with a local brewery to provide a unique beer at a specific Cantina location. In 2017, a collaboration between Taco Bell and Huntington Beach, Calif. brewery Four Sons Brewing became the first such beer available; called the Beach Bell, it was a Mexican-style amber lager with “a unique flavor profile to enhance and complement Taco Bell’s food and flavors,” Taco Bell told the OC Register at the time. It was available at the Newport Beach Taco Bell Cantina for a limited time.

The new collab, meanwhile, is a result of a partnership between Taco Bell and New York’s fabled Blue Point Brewing Company. Called the Big City Bell Pilsner, it’s “brewed with a blend of hops for lime and citrus fruit aroma,” according to the press release; the crispness and balance of the body is, like the Four Sons Beach Bell beer before it, engineered to pair with Taco Bell’s Tex-Mex flavor profile. Personally, I am not a pilsner kind of person — I don’t really do hoppy beer — but I do love a good Blue Point brew. If you’re a hops fan, this one will probably be worth your while.

The 840 8th Ave. and 224 7th Ave. Cantinas have already opened their doors, so if you’re in New York, you can visit them literally right now; meanwhile, the 500 8th Ave. location will open by the end of the year. Happy munching!