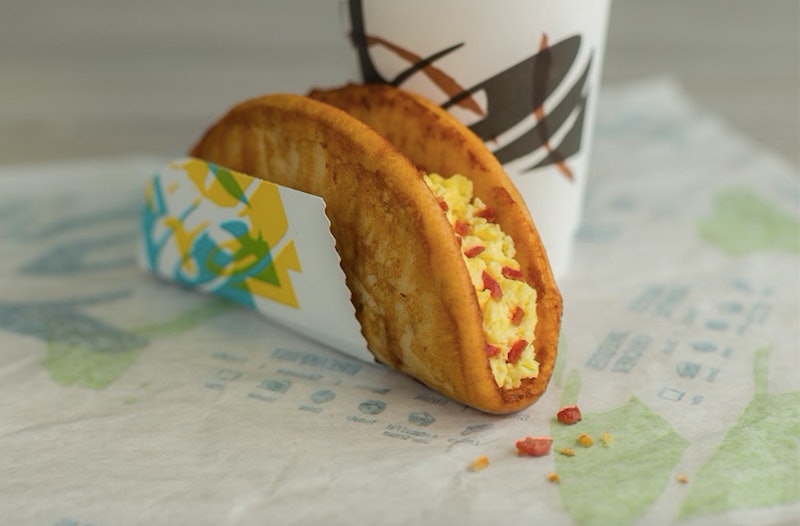 Breakfast at Taco Bell just got a lot more exciting — or at least, more exciting than it already was (because let’s face it: The Tex-Mex chain’s breakfast menu is *chef’s kiss*). Taco Bell is testing French Toast Chalupas as a potential new item to add to the breakfast menu, and… well, let’s just say that even though I just finished lunch, I am still sitting here thinking, “I WANT ONE. I MUST HAVE IT.” Alas, though, for anyone who's wondering where to get a French Toast Chalupa, there’s a catch that is preventing me from realizing my post-lunch Taco Bell dreams: Since it’s a test, the French Toast Chalupa isn’t widely available. In fact, it’s only available in one location — which means that if you want to try one, you’ll have to go to Ohio to do it.

Every since Taco Bell debuted the Waffle Taco as part of their then-new breakfast menu in 2014, they’ve been experimenting with a wide variety of other breakfast taco inventions. Biscuit tacos? Sure. A taco with a shell made out of fried eggs? Why not? In some respects, it’s actually surprising that a taco-shaped item with a shell made out of a piece of French toast took this long to make it to the table; I’d argue that it’s a much more obvious choice than a shell made out of eggs…. but maybe that’s just me. (Also, is anyone else wondering why pancake tacos aren't a thing yet?)

In any event, the French Toast Chalupa test began on April 5, according to the Daily Meal; it consists of a “fluffy, cinnamon-flavored shell filled with scrambled eggs, bacon or sausage crumbles, and a side of syrup.” It’ll cost you around $2.49 a pop — if, that is, you can find them. Remember how I said that you’d have to go to Ohio to get one? Well, you have to go to a very specific part of Ohio, too: They’re only available in certain stores in Dayton.

It’s worth noting that a Taco Bell chalupa bears very little resemblance to an actual chalupa. A specialty of south-central Mexico, traditional chalupas are made of masa dough (that is, they're corn-based, rather than flour-based) which has been either molded into a cup shape or rolled flat and fried; it’s then filled or topped with things like shredded chicken or pork, salsa, lettuce, cheese, and other ingredients. A Taco Bell Chalupa, meanwhile, consists of a taco-shaped shell made out of wheat flour, rather than masa, which has been fried; it’s almost more like a fried taco.

Just, y’know, for whatever that’s worth. I'm still willing to give the French Toast Chalupa a try, even if calling it a chalupa is a little bit of a misnomer.

Nor, by the way, is the French Toast Chalupa the only new item Taco Bell is currently testing. According to Bizjournals, the Queso Quesarito, which features two tortillas, queso sauce, seasoned rice, seasoned beef, chipotle sauce, and sour cream, is currently having a test run in Birmingham, Ala.; tn Oklahoma City, a Crispy Chicken Taco will be seeing a brand new test; and the Beefy Crunch Burrito, which was originally launched in 2009 and has had fans clamoring for its return since its removal from the menu, is having a return test run in Chattanooga, Tenn. Additionally, the Triple Melt Burrito and Triple Melt Nachos will be coming to menus nationwide.

Alas, I haven’t been able to locate anyone who’s actually tried the French Toast Chalupa yet; even social media failed me, turning up only chatter about the fact that it existed — nothing about what it actually tastes like. One Redditor commented that they hope the shell isn’t sweet, although that might something of a tall order; it is made of French toast, after all. The eggs and bacon would probably cut the sweetness somewhat, though, and you can always skip the dipping syrup if sweet breakfasts aren't your jam.

Have you tried the French Toast Chalupa? If yes, do us all a favor and let us know how it was — inquiring minds need to know!