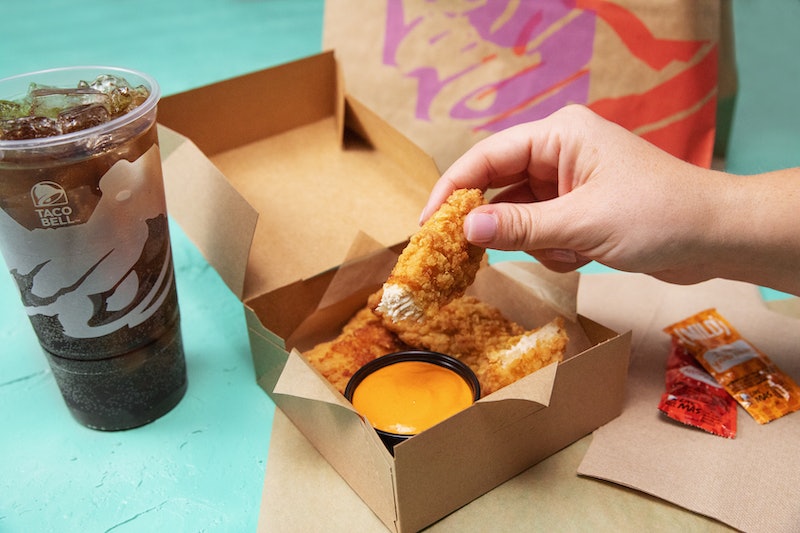 2019 will go down as the year of The Great Chicken Wars. While Popeyes’ Chicken Sandwich sent shockwaves through the chicken world and, in turn, our stomachs, competitors like Chick-fil-A, KFC, and Wendy’s took to the internet to try to claim the title for the best chicken sandwich. Now, a new, unexpected contender has entered the ring: Taco Bell. Announced Wednesday, Taco Bell is testing Crispy Tortilla Chicken tenders. Will their chicken tenders stand up to its chicken brethren? Will they crumble like a hard taco shell? Will we eat anything Taco Bell tells us to? Who's to say, but yes, definitely the last one.

Before you rush to your nearest Taco Bell, it should be noted that the Crispy Tortilla Chicken is currently in testing and only at select locations. If you live in Houston, TX or Dayton, OH, congratulations! You have been selected to enjoy chicken tenders at your local Taco Bell locations before the rest of the U.S. Before you rush to buy a plane ticket to Houston or Dayton, sit tight: the Crispy Tortilla Chicken strips will be coming to Taco Bell locations nationwide in 2020. Patience is a virtue that sometimes leads to chicken strips.

Now, let’s talk tenders: the Crispy Tortilla Chicken is, as its name suggests, an all-white-meat chicken tender. But what makes it a Taco Bell chicken tender? That would be the “bold jalapeño buttermilk flavored marinade” and the fact that it is encrusted in a crunchy tortilla chip coating. The Crispy Tortilla Chicken strips are also served with Taco Bell’s new signature dipping sauce, Creamy Chili Pepper Sauce. It look cheesy, perhaps a little spicy, and something I would like in IV-form, please thanks.

The Crispy Tortilla Chicken is a spiritual follow up to Taco Bell’s Nacho Fries. Regardless of how you felt about Taco Bell selling fries, the company saw it as a huge financial success. A literal $1 billion business success, to be specific, according to an emailed press release. Taco Bell's Nacho Fries don’t appear to be going away anytime soon either, as they have become a menu staple, along with several other iterations including Nacho Fries Supreme, Nacho Fries Bellgrande, and a Nacho Fries Box.

In case you think the new chicken tenders are some sort of haphazard response to everyone else’s chicken wars, Taco Bell wants you to know that they take their chicken extremely seriously. “The team in Taco Bell’s Test Kitchen created 100 iterations before landing on the perfect recipe,” an emailed statement from the company says.

Come 2020, or right now if you live in Dayton or Houston, you’ll be able to enjoy the Crispy Tortilla Chicken in two different ways. The first being in dippable strip form. (It’ll be $2.99 for a 2 piece and $3.99 for a 3 piece.) The second is, as you may expect, in a taco. For $1.99, you can get your Crispy Tortilla Chicken tender in a soft shell taco, topped with lettuce, tomato, cheese, or your standard taco toppings.

If the Crispy Tortilla Chicken follows in the footsteps of the Nacho Fries—and our collective love of all things chicken doesn’t slow down anytime soon—Taco Bell’s forthcoming chicken strips could be on the menu for many a drunken Postmates order to come.