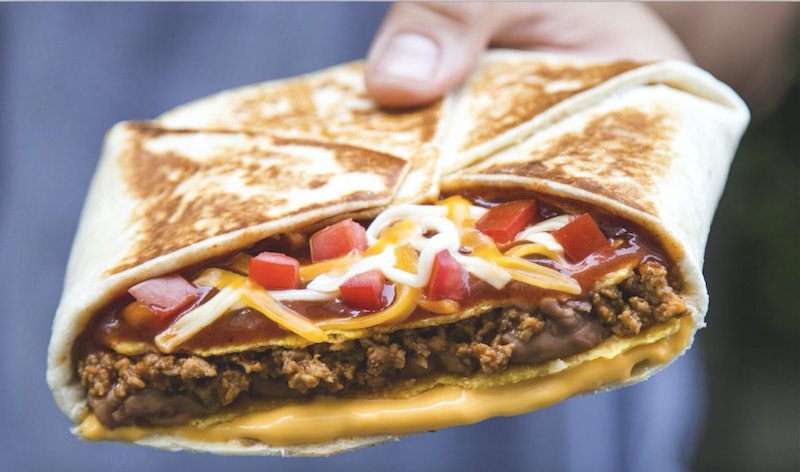 How do you make a delicious snack even better? Make it more portable — and make it more pizza. That's right, the Mexican Crunchwrap, an old Taco Bell standby, is now available with a pizza upgrade, so it's time to get pumped. Taco Bell is testing a Mexican Pizza Crunchwrap, according to Delish, so you can have pizza, Mexican food, and a total splash of delicious, all in a grilled, edible container. Think of the walking and stress eating possibilities.

What exactly is in a Mexican Pizza Crunchwrap? According to Delish, it's essentially a full Mexican Pizza wrapped inside of a delicious grilled flour tortilla. The pizza itself is compromised of Mexican pizza shells, along with beef and refried beans. They take all of that and top it with nacho cheese sauce and pizza sauce, tomatoes, and then cheese. In fact, they top it with three cheeses. The thought of it makes me feel happy but also like I can't breathe — and it's hard to tell if the not-breathing comes from happiness or cholesterol or both... but I'm OK with that. I don't like to dwell on those little details too much.

It's basically like heaven stuffed with another heaven — which happens to be combination that Taco Bell is scientifically proven to be great at. And you can't argue with science, so it's time to get on board. This is the stuff the dreams are made on and munchies are cured on, so I have no doubt this new hybrid will catch on like wildfire.

And of course, as soon as the people of Twitter got wind of this new creation there were dying to try it. If Taco Bell doesn't make it available to everyone soon, they may have a mutiny on their hands.

Because unfortunately, for now at least, the Mexican Pizza Crunchwrap is only available for testing in Oklahoma City, according to Delish. Which is great ... if you live in Oklahoma City. The rest of us will just have to cross all our taco-loving fingers until this because available nationwide. For now, those lucky few can try out the Crunchwrap for $3.49 at available locations — or as part of the $5 box, if you want to add a drink and two crunchy tacos. And who doesn't love crunchy tacos? We all do — we have a human mother effing right to love them. So you might as well go big.

If you're not lucky enough to live in Oklahoma City (which is a sentence I never though I'd find myself writing) you can check out some of the other delish mashups available at Taco Bells around the country. Firstly, the Doritos Cheese Gordita Crunch looks just as ridiculous as it sounds. And Cinnabon Delights or a Strawberry Skittles Freeze are mind-boggling sweet additions to any Tex-Mex meal. If you're more of a morning Taco Bell-er, that's OK too — they've got a Breakfast Crunchwrap and even a Grilled Breakfast Burrito. I don't know if I could handle all of that Crunchwrap before work, but I am definitely on board with the hash browns on offer — because I'm always on board with hash browns. In any offer.

When it comes to make new weird, hybrid, indulgent menu offerings, I have to say that I think Taco Bell is king. Doritos in your food? You can get that. Mountain Dew in a slushie? Of course. They've constantly been pushing those delightful boundaries. And now, you can get a Mexican pizza, wrapped in an extra layer of carbohydrates, and then grilled. We're talking cheese on carbs on cheese on carbs on carbs. Not all heroes wear capes, people.