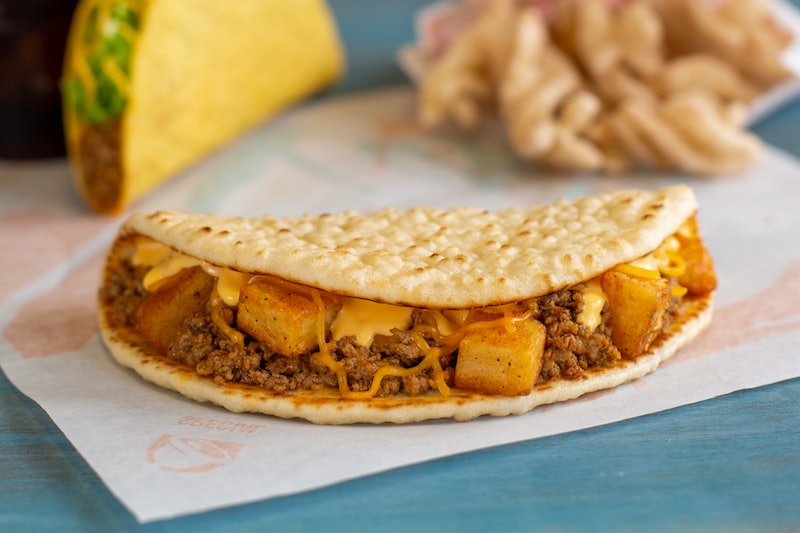 The year isn't over yet. Joining the party just in time are three potential additions to the Taco Bell menu. Taco Bell is testing new items in three cities and I'm on my way to Milwaukee, Wisconsin because wait until you hear about these nachos. Time around the impending new year is often filled with excitement, and now also cheese. The only catch is that one item will be available in a single city. Meaning only three cities in the U.S. will have a form of cheesiness bestowed upon them.

On Dec. 27, Taco Bells in three cities will see a new item gracing local menus. The lucky cities are: Cincinnati, Ohio, Milwaukee, Wisconsin and Charlotte, North Carolina. If you're not from the aforementioned areas, perhaps an end-of-year trip is in ~order~? Maybe a Buffalo Chicken Nacho Box is reason enough to move your New Year's Eve celebrations a few states over? All items are $5 and under, packed with value and flavor.

It's never too late in the year to reinvent yourself. Taco Bell knows this. And because of it, three lucky cities get to enjoy a menu make over. For those of us who can't make it to North Carolina in time to check out what Buffalo Chicken Nachos are all about, we can look forward to what the taco chain has in store for the new year. And drool over — I mean, be inspired by — their descriptions below.

If you're located in Cincinnati, Ohio prepare to welcome the Beefy Potato Flatbread to your local menu. Priced at $1, the flatbread will have you cheering, "TACO BELL IS FOR LOVERS." The meat and cheese combo is cocooned in a toasty flatbread. Specifically, it consists of seasoned potato bites, seasoned beef, warm nacho cheese sauce and melted cheddar cheese. If you want to turn the flavor notch up to hot, add jalapeños.

A Taco Bell press release further turns up the heat on this selection by stating, "This hearty indulgence of meat and potatoes will be available a la carte for $1, or in a $5 Box with a Doritos Locos Taco, Crunchy Taco, Cinnamon Twists, and a medium drink." Taco Bell is all about giving their customers value, and they know what they're taco-ing about.

Flatbread not your thing? No problem. Let us travel to Milwaukee, Wisconsin where nachos are being fine tuned. On local menus in Milwaukee Taco Bell will be testing $5 Cheesy Jalapeño Nacho Boxes. Though the box will not come gift wrapped, the contents inside will feel like a present. The box will feature, "nacho chips, seasoned beef, refried beans, warm nacho cheese sauce, a three-cheese blend, sour cream, pico de gallo, creamy jalapeño sauce, and jalapeños." Oh, all that and a medium drink.

Over in Charlotte, North Carolina, you'll find another box of nachos. Still not gift wrapped, still seemingly a gift from the Taco Bell menu developing deities. This box may be short on the jalapeño heat but it shows up in a burst of out-of-the-box nacho flavor. Buffalo Chicken Nachos Box will include, "refried beans, warm nacho cheese sauce, a three-cheese blend, shredded chicken, buffalo sauce, sour cream, pico de gallo, and guacamole all placed on top of a bed of nacho chips." And again, served with a medium drink. All for $5.

As 2018 comes to an end, consider shredded cheddar celebratory confetti. Taco Bell is concluded the year on a cheesy note that's also sort of like a cliff hanger. Because, even if you're not located in one of the three lucky Taco Bell markets, consider these drool worthy test items something to look forward to in the new year. We can only hope.