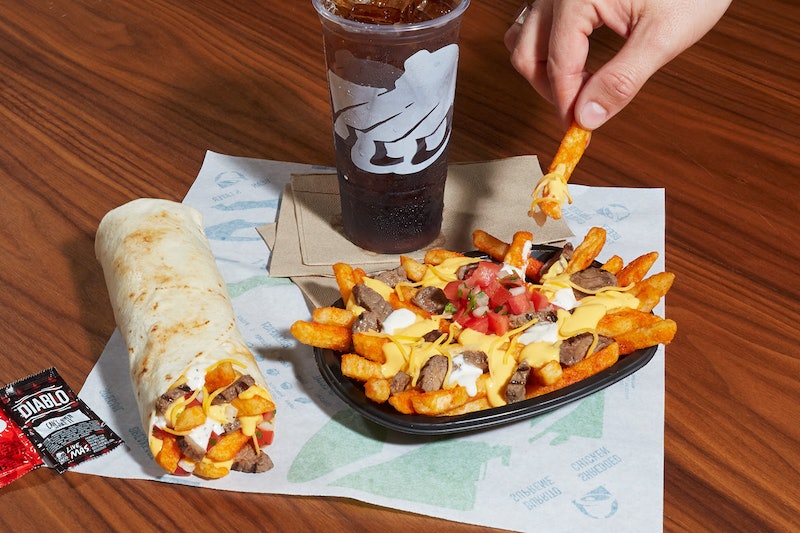 For so long we've been bracing ourselves for reaper sauces that perhaps we've become immune — a full circle "(Don't Fear) The Reaper," if you will. For those of us who laugh in the face of metaphorical death, there's another kind of sauce to put on your radar — specifically, an immortal one. Taco Bell is testing Vampire sauce — specifically for its new Vampire Steaked Fries (STAKED!! GET IT? WOW, a mood) — in participating Chicago locations, so bust out your Twilight DVDs and start preparing your body for a whole vampiric mood.

Per Taco Bell, the Vampire sauce is "spicy-savory sauce with flavors of garlic and jalapeños," which makes one wonder if it is meant more to ward off vampires than celebrate them. Essentially, consuming it doesn't not make you a walking Buffy the Vampire Slayer reboot. The Vampire Steaked Fries come in a "bed of boldy-seasoned fries topped with marinated steak, Vampire sauce, nacho cheese sauce, shredded cheddar cheese, and pico de gallo" and retail for $3.49. You can also snag them in a warm flour tortilla for $2.99, which honestly, seems like a low, low price to discourage the likes of Edward Cullen and Count von Count from knocking on your door.

If you aren't in the test location of the Vampire Steaked Fries and its tortilla situation, while you are certainly still vulnerable to getting sucked into some Mystic Falls-level mayhem, you may also be in luck re: other new Taco Bell test items. Another one, the Buffalo Chicken Nacho Fries, is testing in select locations in Memphis. Per Taco Bell, these "boldly-seasoned fries [are] topped with shredded chicken, tangy buffalo sauce, nacho cheese sauce, shredded cheddar cheese, sour cream and pico de gallo," and will retail for $2.99; it will also come in burrito form for the same price.

Taco Bell fans in Toledo, Ohio are also in for a treat; per Taco Bell, they'll be testing Loaded Taco Fries, which "combines the classic flavors of the Crunchy Taco with the bold flavors of Nacho Fries." The chain describes the test item as "a pile of seasoned fries topped with nacho cheese sauce, seasoned beef, lettuce, tomatoes, shredded cheddar cheese, crunchy red strips and sour cream," which will be available for $2.99, and also served in burrito form for the same price.

And just in case you, like me, are shaking your fist at the sky and its unmoved taco gods that you are not in the test market for any of these items, good news: Taco Bell's Steak Reaper Ranch Fries are now a nationwide menu offering. The offering, which features a sauce that combines the "the world's hottest pepper," aka the Carolina Reaper, and Taco Bell's ranch sauce, initially tested in Cincinnati — a test that must have been successful, because customers can get this "bed of seasoned fries topped with marinated steak, nacho cheese sauce, Reaper Ranch sauce, sour cream, and tomatoes" all over the U.S. for $3.49, or in burrito form for $2.99.

In the meantime, let's all cross our fingers and stakes that the Vampire sauce is popular enough to hit the rest of the country — otherwise, it would really suck. (I'll see myself out.)