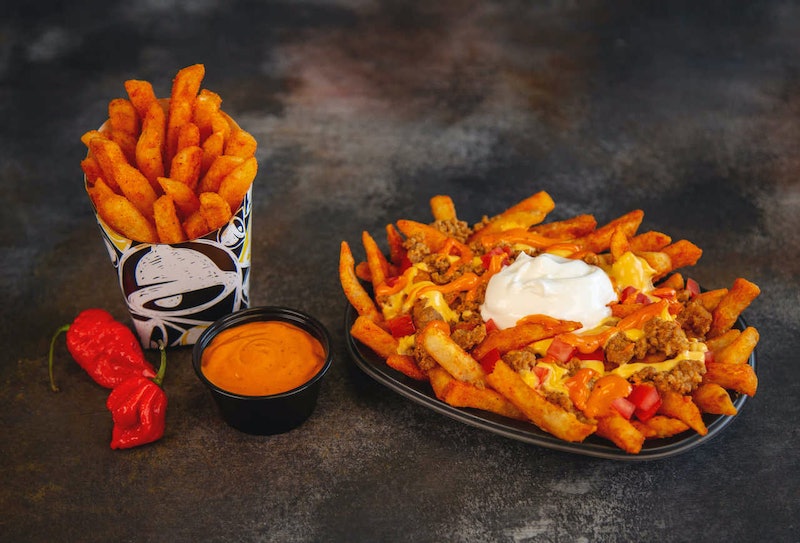 So, hey, exciting news today for Taco Bell enthusiasts, fans of French fries, and extreme spicy food masochists (er, lovers): Taco Bell is testing Reaper Ranch Fries right now — and yes, they are exactly what they sound like. The fries, which come doused in a sauce made of Carolina Reaper peppers and ranch dressing, will be available for about a month starting on Aug. 16 at select Taco Bell locations in Ohio — as will two other test items, which have been creatively named the Rattlesnake Burrito and Rattlesnake Fries. (I don't have any idea what fries have to do with rattlesnakes, but whatever.) Both of the French fry options look to be variations on Taco Bell’s exceedingly popular Nacho Fries, but with a ton of extra bells and whistles on top. It’s a good day for hot peppers, that’s for sure.

Although fries have been available on the Taco Bell menu in the Latin American, Asian, and European markets for quite some time, they didn’t make it to the United States until January of 2018. That was when Taco Bell first launched Nacho Fries in the U.S. market, bestowing upon us both regular and upgraded versions of the snack: A standard order of Nacho Fries consisted of fried potatoes spiced with Mexican seasoning and served with warm Nacho Cheese for dipping, while the Supreme and Bell Grande versions featured add-ons like beef and Pico de Gallo.

Alas, though, they were only a limited-edition offering; by April, they were gone. However, it turns out that they were also the most successful item launch in Taco Bell’s history, according to CNBC (which is really impressive when you consider the fact that Taco Bell’s Doritos Locos Taco is widely thought to be one of the most successful fast food innovations of all time) — which, in turn, resulted in Nacho Fries’ triumphant return to the menu for the Summer 2018.

Of course, this round of Nacho Fries, too, is limited; they’re set to disappear again in mid-September. But at least they’re going out with a bang — a spicy, badass-sounding bang.

According to Thrillist, the Reaper Ranch Fries get their name from their star ingredient: The Carolina Reaper pepper. Currently ranked as the hottest pepper in the world, the Carolina Reaper averages 1,641,000 Scoville Heat Units, according to the spicy pepper enthusiast website Pepperhead — but they’ve measured at as high as 2.2 million SHU, which is, uh… a lot. Even the almighty ghost pepper — which itself had a fast food moment a few years ago, courtesy of Wendy’s Ghost Pepper Fries and Jalapeno Fresco Chicken Sandwich — isn’t that hot; it ranks only seventh on the list of spiciest peppers in the world, coming in at anywhere from 855,000 to 1,041,427 SHU.

Anyway, it’s no wonder that Taco Bell’s Reaper-infused option has been tempered by the inclusion of ranch dressing. Like the original Nacho Fries, these puppies are available in both a standard and souped-up version: A standard order of Reaper Ranch Fries comes with a healthy slug of Reaper Ranch sauce, while the Supreme version is topped not just with the sauce, but also with nacho cheese, seasoned beef, diced tomatoes, and sour cream.

That’s not all Taco Bell has up its sleeve, either; Rattlesnake Fries and a Rattlesnake Burrito have also been thrown into the mix — and if you’re not the kind of person who likes their food so spicy it literally hurts, they might be more appealing to you. Both come with nacho cheese, steak, creamy jalapeno sauce, and pickled jalapenos — jalapenos, of course, ranking much, much lower on the Scoville Heat Scale than the Carolina Reaper does. According to Jalapeno Madness, your average jalapeno usually only ranges between 2,500 and 8,000 SHU, making the Reaper several hundred times spicier.

Still, though, these exciting new items come with some caveats of their own: Because they’re tests, rather than full-on launches, they’re only available in two cities, and only for about a month. According to USA Today, Columbus and Cincinnati in Ohio are the two lucky spots; Delish elaborated, specifying that the Reaper Ranch test will be on Taco Bell menus in Cincinnati, while the Rattlesnake test will take place in Columbus. They both launch on Aug. 16 and will remain until the middle of September — presumably leaving when the regular Nacho Fries options depart for the Great Fryer in the Sky.

Get ‘em while you can — and also, please tell me how they are. Inquiring minds need to know.