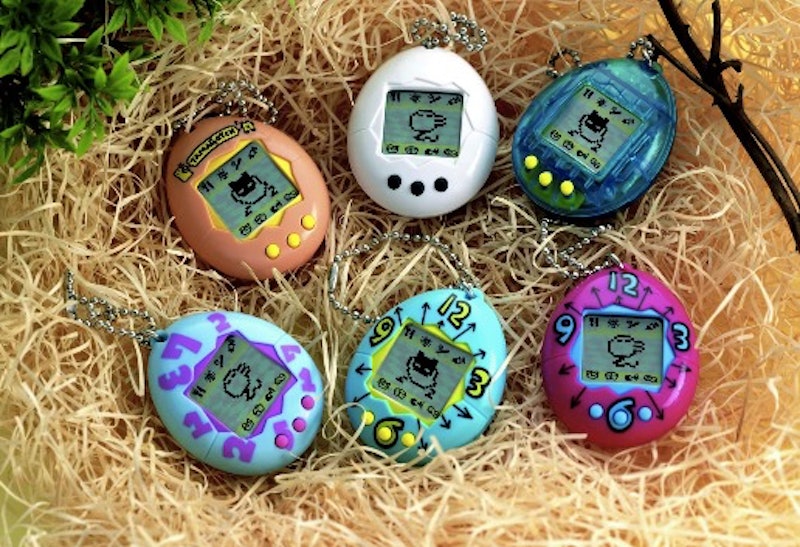 The '90s are back. Honestly, I don't really fee like they ever left — but if you ever had any doubt that retro is the "it" thing, I have news for you: The classic '90s Tamagotchi has been re-released. I'm talking the original, iconic '90s digital pet. No, not a knock-off. No, not one of the bazillion iterations that's been created since its inception. The Tamagotchi. This is not a drill. Yes, I'll pause for your wild cheering. This is the very first relaunch of the original game, and the '90s kid in all of us is giggling with glee — but before you start counting your allowance money, there's one disappointing catch: The re-released Tamagotchi appears only to be available on Amazon Japan right now.

The Japanese toy company Bandai first released the Tamagotchi to the world in 1997 (a Japan-only release had preceded the global release in 1996). Tamagotchis gave us one of our first tastes of adult (-ish) responsibilities, as we had to care for the pet, or else it would die. Who knew kids would want to be responsible for feeding a digital animal and cleaning up its poo? The toy was a huge sensation, though, and went on to sell more than 76 million worldwide. Since our youth, Tamagotchis have held a special place in our nostalgic little hearts — and now, according to the Telegraph, our favorite egg-shaped digital game has returned, complete with the original six characters.

For what it's worth, the video seen here isn't brand new — it was uploaded to YouTube on Jan. 9, 2017. It's the first that many of us are catching wind of it, though, so naturally, we're all going bananas for it.

And our obsession makes sense: After all, Tamagotchis provided that happy medium between being a kid who still liked cartoons and recess and wanting to be a grown-up. We took our Tamagotchi responsibilities seriously. We'd even sneak them to school so that we'd be there for them when it mattered — ducking into our lockers to make sure they were fed and cleaned up. And if we were bad parents and they died, well, I think some of us are still traumatized from that.

Although the relaunched Tamagotchi isn't available in this country (yet), I'm keeping my fingers crossed that the wildly popular '90s toy will find its way to the U.S. of A. once again. In the meantime, you can always turn your phone into a Tamagotchi if you just can't wait to recapture the nostalgia.