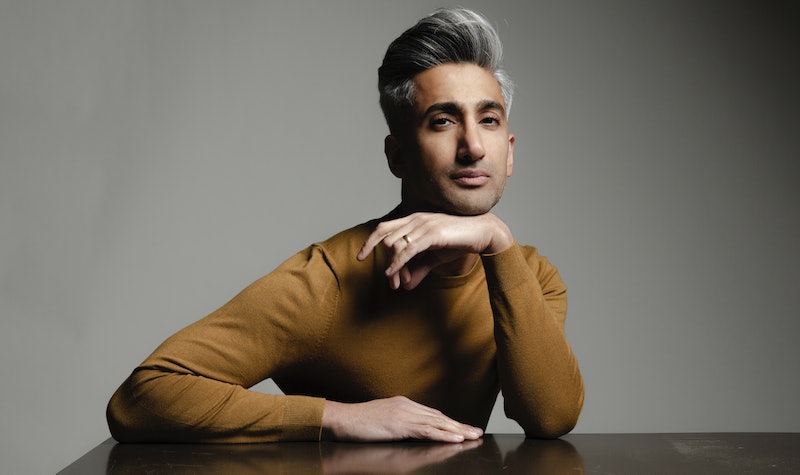 Tan France has all the best qualities of a transatlantic transplant. After ten years of in living in the U.S., the designer, Queer Eye star, and new author knows the value of straight talking (which, lucky for me, makes him an excellent interviewee) but there are definitely still remnants of that OTT British politeness (almost every answer he gave me ended with, “but what do you think? I’m interested to know”). All this is wrapped up in a gorgeous American-by-way-of-South-Yorkshire accent that you just want to listen to on repeat.

In Queer Eye — the Netflix show that catapulted Tan to worldwide fame in 2018 — we don’t hear as much from Tan as we do others in the Fab Five. While Jonathan Van Ness is the *talker* of the group (and god bless him for it) and Karamo Brown takes care of the DMCs, Tan is more aloof, speaking only when he finds a particularly ugly shirt in someone’s wardrobe or when a topic brought up on the show affects him in a profound way. However, by contrast, the on-screen stylist is one of the chattiest interviewees you could ask for, and in his autobiography Naturally Tan, we learn just how much he has to say.

Naturally Tan leads us through the designer's unique life story from South Yorkshire to Manchester to London and, finally, to Salt Lake City, where he met his husband Rob France and the two built a life together. The book is anchored by items, concepts, and memories of note for the author; the opening chapter, for example, is entitled "Shalwar Kameez," and speaks about what it is like growing up as a gay man in an Asian family. "Slippers" tells of Tan's and his husband's first date at Olive Garden. "Crossed Legs" explores identity, femininity, and acceptance of yourself.

I caught up with Tan to hear more about the book and ask him a few burning questions I’ve had since day one of Queer Eye, including his thoughts on loungewear and Meghan Markle. Most importantly, I asked him whether he has any plans to move back to the UK, and we did a quick-fire round to test if his knowledge of British food, TV, and high street shops was still up to scratch.

Rowena Henley: You’re known the world over for your styling expertise, and we often see you style Americans — either celebs or the heroes on Queer Eye. I want to know, though: if you could dress one British public figure that you haven’t already, who would it be?

Tan France: I've got two. They don't need my help in any way, because they look great, but I just would love to [spend time with them]. If I just had, like, three hours to spend shopping with a person, it would Olivia Colman FOR SURE. She's a national treasure. And then Richard Madden. He was amazing in Bodyguard.

RH: Oh, they're great people. That would be so much fun.

TF: Yes, but let's make it very clear: they do NOT need style advice.

RH: And what about Meghan Markle? What do you think of her style?

TF: Let me just start by saying: I love Meghan Markle. I was a huge Suits fan. I always thought she was drop dead gorgeous. And I love that we have a person of colour in the royal family, I love that she's stepped into her power. She's very regal, and appropriate, and I think she's doing a really good job. Considering how much sh*t she got, I really, really have so much respect for her.

BUT, if there's one thing that I hate — and I can't be too harsh about it because I think that it’s encouraged in the royal family — it’s all those damn hats and fascinators. I just think, “you're way too cool for this. What are you doing with those stupid hats on?” But I know that all the royals wear that kind of stuff. It's so old-school rich white people in the UK, and I'm like, “can we just move on, Caucasian folk?” But she can't do cool girl; it would be insane if she decided one day to wear an Off White outfit, like it would be insane. Would I love it? Yes, of course. But it would be nuts.

Do you disagree? I wanna know.

RH: No, no. I'm really with you with hats. But then I think, you know what? She has very limited choice, being a royal. She's doing great.

TF: I honestly think she's forced to wear them, I don't think for a second she's thinking: "ooo, you know what I want to wear today? That ugly fascinator over in the corner." Like, no way.

RH: You say in the book that people should try not to be too sloppy around their partner, and that it's important to dress up for your other half. So can you talk me through your loungewear? Because I really want to know what Tan wears when he's chilling at home.

TF: OK, but I do want to make a correction. I'm not saying you have to look good all the time or dress up all the time. Absolutely not. What I'm saying is this: everyone knows we're hot-blooded people. We know if we've made an effort or not. I know that when I'm around my husband, if I look a certain way, I know I've either made a conscious effort to look that way or I haven't. And if I haven't, I need to correct that.

I wear loungewear the majority of the time around the house. It's very rare that you will see me in “outdoor clothes” in the house when we don't have guests over. So, when I'm at home, I'm in pyjamas. And a robe. But … they’re the nicest that I can find. I will spend as much on those as I do on my out-of-the-house clothes. Because my husband is the one to see me more than anybody, and I want to dress up for him as much as anybody else, but I find jeans and suits really restrictive. So, I wear pyjamas.

They are usually — and this is going to sound so bougie, I know — they're usually silk pyjamas. And they're always a matching set. And then I will often wear a big silk robe over it. Usually a down-to-my-ankle, flow-y robe that has my name on it. I know that sounds so ridiculous. But ever since the show, people know that I love to wear fancy loungewear, so they'll send me robes that have "Mr France" written on them, and I'm like "Yes, please!" It's so nice. So that's the kind of thing I wear around the house.

TF: So not dressing up in an outfit, but it's very clear that I still want my husband to find me desirable.

RH: That sounds like a dreamy set up, lounging in silk pyjamas.

TF: My neighbours probably think I'm insane, because I often will go to the garden at the front of the house or I'll go and check the mail [in them]. So I know my neighbours have seen me in my pyjamas at 4 o’clock in the afternoon. But, here's the thing, I just wouldn't be comfortable around my house [in anything else]. But just because I'm in my pyjamas doesn't mean I don't look good.

RH: Speaking about where you live; your book acts as a kind of love letter to Salt Lake City, the U.S. in general, and also the UK. But we all want to know: are you ever going to move back to the UK?

TF: I'm going to be honest. Not permanently. I hope to come back. I hope that one day I'll get a UK show; I would love to come back for a few months at a time each year to film something. But, honestly, the U.S. is my home for a couple of reasons. The weather. It's just gorgeous. I can't go back to the rain. It just makes me feel so blue. And my husband is American, and his family's here, and we're really close. All my closest friends are here. The life here is just something so special that I've built for over ten years. I would be lying if I said, "yes, I'm going to move home." But I visit more now than I ever have. I love coming back home. I miss England like crazy. It just wouldn't be my permanent home.

RH: That's fair enough. But having said that, I'm going to ask you some quick-fire questions to test your knowledge and see if you’re still a Brit at heart.

TF: Yorkshire Tea. But PG Tips. I'm sorry, PG Tips. I never go for anything else. Even in America.

TF: Jaffa, every day of the week. But my favourite biscuit is a Hob Knob.

RH: Gryffindor or Slytherin? Which would you rather be in?

RH: Gavin and Stacey or Smithy and Nessa?

TF: Ahhhh, that's a horrible one. Sh*t. OK... Eastenders. But I just got to go visit the set of Coronation Street, because I used to watch that when I was younger, and it was one of my proudest moments pulling a pint at the Rovers Return.