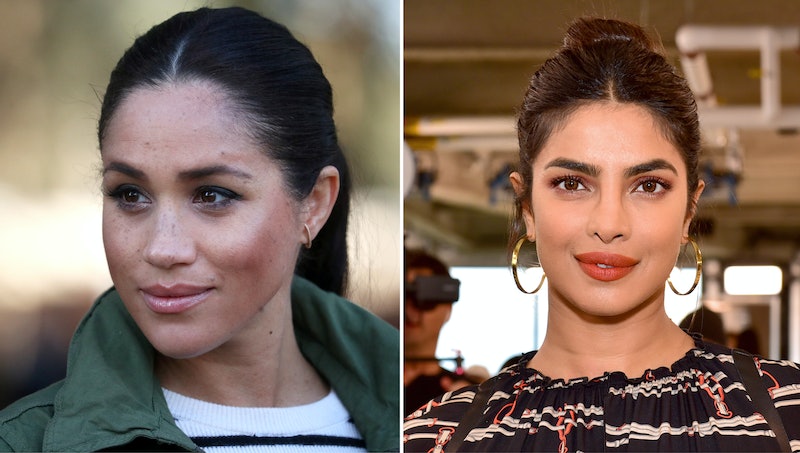 Another day, another pair of women being pitted against one another. Yes y'all, because, in case you'd forgotten: women can't be in power without hating on each other. Hating and desperately grasping for success like a load of White Walkers trying to get through a door, right? (Holla Game Of Thrones fans!) Reports that Meghan Markle and Priyanka Chopra have fallen out have recently emerged, and I, for one, am done with reading these kind of stories.

Before I dive into all this alleged beef being that's being thrown about, let me start by giving a little context. Namely that Chopra happily attended the royal wedding last year, followed by an actual holiday at the Duke and Duchess' place in the Cotswolds with her beau Nick Jonas.

Despite all that, Page Six is now reporting that a "source" has claimed the pair are on thin ice after Markle didn't rock up to Chopra and Jonas' nuptials in December. They go on to say that, because of this supposed dis, Chopra didn't go to that baby shower. You know, Markle's private baby shower with her closest friends at one of the most special times in her life? The one that is totally her business and no one else's? The one that many media outlets have been having an absolute field day over? Yep, that's the one.

"I don’t think anybody else would be able to [modernise a centuries-old institution] the way she will," Chopra told the magazine. "She’s just right for it, she's an icon, truly, that girls can look up to, that women can look up to. She's normal, she's sweet, she's nice, she thinks about the world, wants to change it and this was even before any of this happened. So I do think Meghan being a part of the royal family is a big step in the direction of so many things; of women, of feminism, of diversity, of race, of the monarchy versus everyone else. It’s a beautiful step in the right direction".

Chopra and Markle have also both always been outspoken about feminism and the importance of women supporting one another.

One would hope that, in this day and age, the very concept of the "b**** fight" would be well and truly outdated by now. Sadly, it's a story as old as time: The Queen Mother and Wallace Simpson; Joan Crawford and Bette Davis; Diana and (seemingly) every woman in the royal family.

Now it appears that Meghan is the new image of a "difficult" woman who is causing friction. Why aren't men ever pitted against each other in the same manner? Is it not salacious enough? No, I reckon it's the fact that the very idea of women who break the status quo and bring change are too terrifying for the powers that be. So they continue to try and tear down women, using their closest relationships to do so. But women like Meghan and Priyanka aren't likely to be phased by all this nonsense — they're too busy changing the world.

More like this
Meghan Markle Delivers Empowering Message About Being Yourself
By Sophie McEvoy
At 28, Melanie C Was Falling In Love & Reclaiming Her Confidence
By Olivia-Anne Cleary
Molly-Mae & Tommy Fury Shared The Cutest Gender Reveal Video
By Sophie McEvoy and Sam Ramsden
The 'Love Island' Wedding Mystery That No One Saw Coming
By Darshita Goyal
Get The Very Best Of Bustle/UK