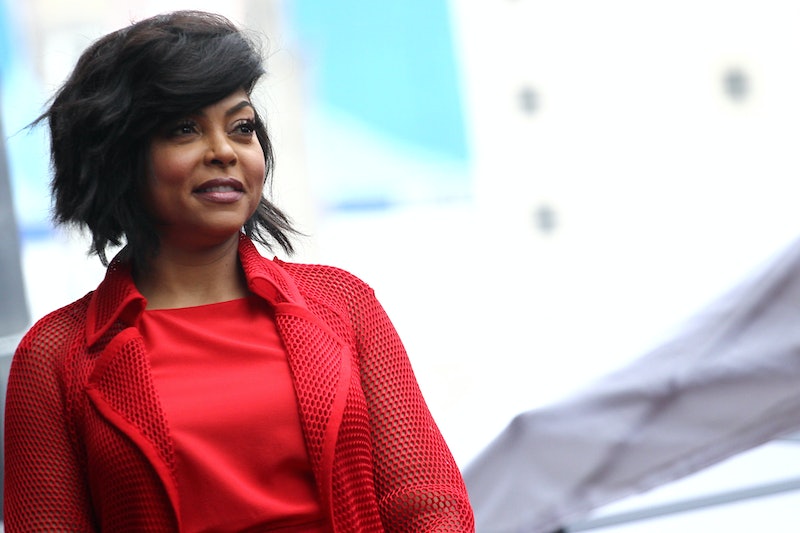 On Monday, Jan. 28, Taraji P. Henson gave an emotional Hollywood Walk of Fame speech that discussed her long road to fame, paying it forward, ageism — and most importantly — the unconditional love that she shares with her family, according to a video shared by Entertainment Tonight. Henson's star acceptance speech was filled with many poignant moments which shed light on her real life roles as a mother, daughter, granddaughter, and role model in Hollywood. And while she used the platform to address many matters that were important to her, the bond that she shares with her family was a topic that took center stage during Henson's shining moment.

The Washington D.C. native, who became notably overwhelmed with sentiment several times while addressing the crowd, fought to hold back tears as she thanked her family — many of whom were in the audience cheering her on. In her speech, Henson was particularly careful to thank her grandmother, who has served as both an inspiration and catalyst for the actor's career.

As she stood at the podium with her friends, family, and fans before her, Henson explained,

The entertainer, who according to People, moved to LA in 1996 with $700 in the bank and her young son in tow, revealed that her grandmother has accompanied her to many Hollywood events in the years since she landed her big first major role in John Singleton's Baby Boy.

"I know she thought she would never live to see this," Henson told the crowd as she looked on at her grandmother and said, "this is your legacy."

Henson then spoke emotionally about her mother and son who she reveals gave her to will to continue pursing her dreams of being an actor and also shared a huge thanks for her fans whom she said “mean the world” to her. She later went on to reveal the "surreal" nature of the moment saying, “I keep looking at that star going, 'is this real?' I’ve imagined it and here it is.”

During the ceremony, Henson was honored with speeches by director John Singleton, who placed Henson in her first major role, and singer/actor Mary J. Blige, who is a close personal friend of Henson's.

Despite her emotions, the 48-year-old Empire star managed to keep the crowd laughing as she used a lyric out of the Academy Award-winning song from her film Hustle & Flow to joke about her "long walk to fame." She later addressed the stigma which is often placed on women over 40 in Hollywood when it comes to getting roles after a certain age. She explained,

"I want to be around forever. I want to break through glass ceilings when they tell women over 40 that, ‘Ah, you’re done. We’re sending you out to pasture. We’re going to hire something young and sexy.’ Then when I look up and see these men doing these kick-ass roles at 60, I’m like, ‘Wait a minute, I still look good.’”

The moment was certainly monumental for both Henson and her family, who are, no doubt, overjoyed about her latest achievement.