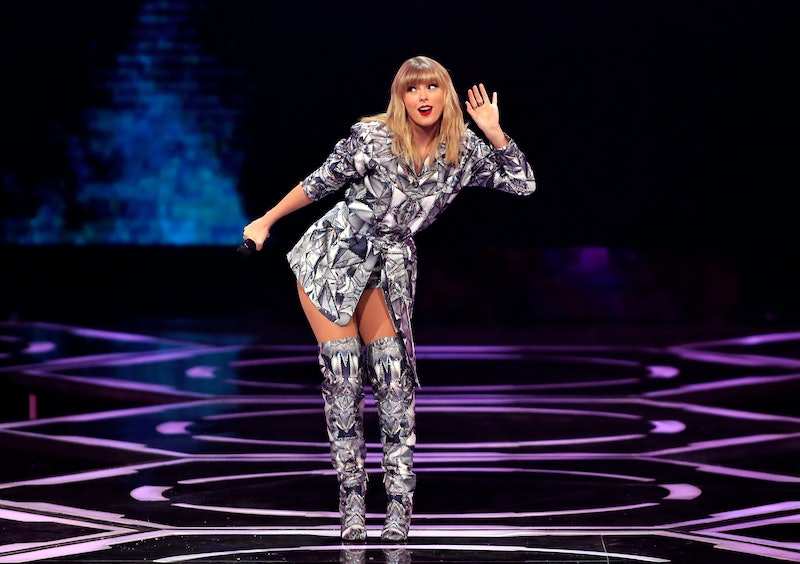 Swifties, get ready because your idol needs your help. Taylor Swift is claiming that Scooter Braun and Scott Borchetta won't let her perform her old songs. It's all part of the fight over her masters which were sold to Braun earlier this year, and she's asking her fans for help.

Two weeks ago, it was announced that Swift would be recognized as the Artist of the Decade by the American Music Awards this year, an award which has acted as a catalyst for this most recent battle regarding her masters. In a tumblr post shared on Thursday, Nov. 14, titled "Don't know what else to do," Swift explained that, as part of the awards ceremony, she was hoping to perform a medley of her hits. But, according to a lengthy message, also shared on Twitter and Instagram, Swift claimed that Braun and Borchetta would not allow her to do so. "I'm not allowed to perform my old songs on television because they claim that would be re-recording my music before I'm allowed to next year."

The singer continued, claiming that the two music executives, who now own the masters of Swift's recordings up until her most recent album, Lover, were also barring the use of her music in a planned Netflix documentary. She further claimed that, while negotiating the use of her music for these projects, Borchetta offered her a deal. According to Swift, he would allow her to use her songs if Swift agreed not to re-record her masters, something she had planned to do next year, and stopped speaking publicly about Borchetta and Braun. The message, she wrote, is loud and clear: "Basically, be a good little girl and shut up. Or you'll be punished."

Bustle has reached out to both Borchetta and Braun regarding Swift's claims, but have yet to hear back. Big Machine Records released a statement on Friday, Nov. 15, calling her claims "based on false information." That said, the statement does not explicitly deny blocking Swift from performing her old songs, but rather states in part, "At no point did we say Taylor could not perform on the AMAs or block her Netflix special."

Swift wrote that instead of continuing private negotiations, she felt the need to make things public. "Please let Scott Borchetta and Scooter Braun know how you feel about this." Not only is she asking fans to use their voice to publicly ask them to let her perform songs from her first five albums, she is also asking fans to reach out to her fellow artists. "I'm hoping that maybe they can talk some sense into the men who are exercising tyrannical control over someone who just wants to play the music she wrote," she said.

Within hours of Swift's public plea for help, #IStandWithTaylor began trending on Twitter, as did #FreeTaylor. And, based on the tweets, fans are ready to step up and help Swift however she sees fit.

At the end of the day, Swift says she doesn't want anything but to be able to sing her own songs, songs that she wrote — that made her one of the most famous and successful singer-songwriters of her generation. "I just want to be able to perform MY OWN music. That's it," she wrote. And, if calling on the power of Swifties is the only way to make that happen, then that's what she's going to do.

This article was originally published on November 15, 2019