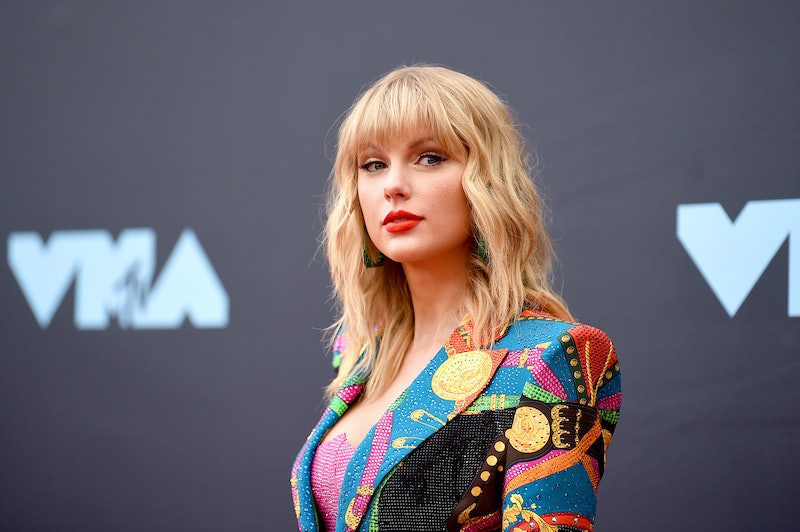 While Daenerys (Emilia Clarke)'s transformation in the final season of Game of Thrones left most viewers upset and confused, there was one very famous fan who found the queen's storyline to be shockingly relatable. In a recent interview with Rolling Stone, Taylor Swift admitted she identifies with Daenerys on Game of Thrones because they're both women in positions of power.

While speaking about the way she has "masterminded" her career since being a teenager — and revealing that she's finally okay with being open about that — Swift reflected on the way women in the entertainment industry aren't allowed to be openly shrewd and ambitious. "People love new female artists so much because they’re able to explain that woman’s success," the singer explained. "There’s an easy trajectory. Look at the Game of Thrones finale. I specifically really related to Daenerys’ storyline because for me it portrayed that it is a lot easier for a woman to attain power than to maintain it."

Of course, Swift doesn't want fans to think that she supports Dany's decision to burn King's Landing, noting her statement was "a total metaphor," she did relate to the way people on the show and watching at home turned on the Targaryen queen so quickly. "Obviously I didn’t want Daenerys to become that kind of character, but in taking away what I chose to take away from it, I thought maybe they’re trying to portray her climbing the ladder to the top was a lot easier than maintaining it." She added, "The times when I felt like I was going insane was when I was trying to maintain my career in the same way that I ascended. ... It’s easier to get acclaim than to keep it. It’s easier to get attention than to keep it."

Swift added that while watching the final season of the fantasy saga, she found herself seeing plenty of parallels between her own career and Dany's rise to — and fall from — power. "Maybe this is a reflection on how we treat women in power," she said, "how we are totally going to conspire against them and tear at them until they feel this — this insane shift, where you wonder, like, 'What changed?' And I’ve had that happen, like, 60 times in my career where I’m like, 'OK, you liked me last year, what changed? I guess I’ll change so I can keep entertaining you guys.'"

This is far from the first time that Swift has revealed that she identified with the characters on Game of Thrones; in a May interview with Entertainment Weekly, Swift admitted that Arya (Maisie Williams) and her "Kill List" inspired a lot of the lyrics on reputation. "So much of my imagination was spent on Game of Thrones," Swift told the outlet. "At the time, I was making reputation and I didn't talk about it in interviews, so I didn’t reveal that a lot of the songs were influenced by the show."

"'Look What You Made Me Do' is literally Arya Stark's kill list," Swift noted. "'King of My Heart' was influenced by Khal Drogo and Daenerys. It's even got this post-hook of drums — I wanted them to sound like Dothraki drums." And Thrones' influence on Swift extends to more than just her song lyrics: "My entire outlook on storytelling has been shaped by [Thrones]," she admitted.

Of course, Game of Thrones isn't the only fictional story that inspired Swift to write the songs on her most recent albums, as she told Elvis Duran on Z100's morning radio show in August that "Death By A Thousand Cuts" was based on the Netflix rom com Something Great. "It's a movie about how she has to end this relationship that she didn't want to end because she's still in love with the person but they just grew apart and he's not a jerk," Swift explained. "It's just sad because it's just realistic, time passed and now we're different people and that is the most devastating thing."

While Swift might be famous for writing music based on her relationships and real-life experiences, it seems like the most important source of inspiration for the singer can be found in Westeros. After all, no singer embraces the idea of "valar morghulis" quite like Swift.

More like this
The Ticketmaster Senate Hearing & Taylor Swift Tickets Debacle, Explained
By Jake Viswanath
Taylor Swift May Miss The 2023 Grammys For Reasons Fans Know “All Too Well”
By Jake Viswanath
8 Easter Eggs From Taylor Swift's “Lavender Haze” Music Video
By Shahed Ezaydi
The 12 Most Controversial & Unexpected Grammy Moments Ever
By Jake Viswanath
Get Even More From Bustle — Sign Up For The Newsletter
From hair trends to relationship advice, our daily newsletter has everything you need to sound like a person who’s on TikTok, even if you aren’t.