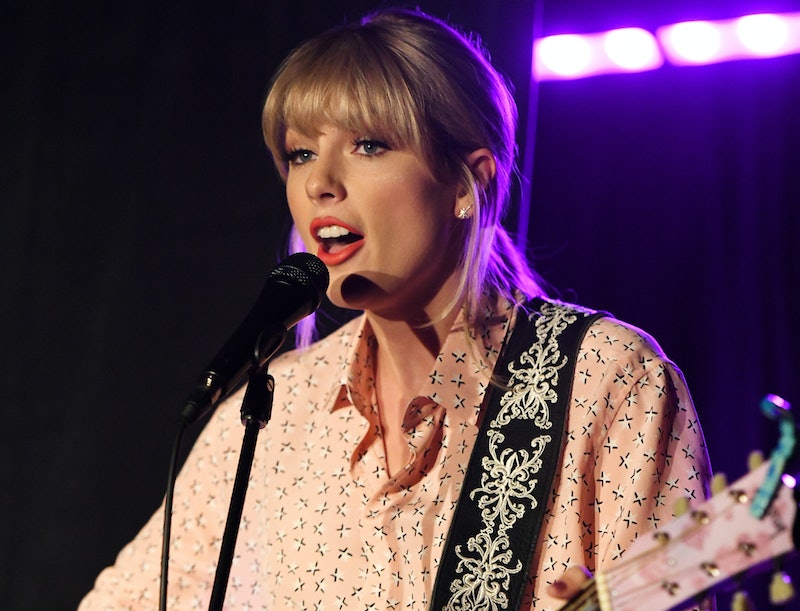 Whichever side you are on when it comes to the Taylor Swift-Scooter Braun drama may depend on which singers and celebs you prefer. But, beyond all the people taking sides and the public he said-she said of it all, this is a legal issue. And Taylor Swift's lawyer, Don Passman, just released a statement claiming that Swift wasn't given the chance to purchase her masters by Scott Borchetta, contrary to his previous claims. As The Hollywood Reporter noted, whether this is a legal issue or not is debatable. But Passman's statement is just another piece in the messy puzzle that is the deal surrounding Swift's master recordings and goes directly against what Borchetta claimed happened.

On June 30, music producer and manager Braun acquired Borchetta's Big Machine Label Group and with it, the master recordings of Swift's first six albums. According to Billboard, the entire deal cost upwards of $300 million. And while these two record execs were excited to be joining forces, that sentiment wasn't shared by everyone — most notably the "You Need To Calm Down" singer.

Swift took to Tumblr to express her disappointment that Braun now owns the master recordings of those past albums since she believes that Braun had bullied her in the past. Now, Passman is bringing the attention back to the person who actually sold Swift's music to Braun — Borchetta. "Scott Borchetta never gave Taylor Swift an opportunity to purchase her masters, or the label, outright with a check in the way he is now apparently doing for others," Passman's statement said.

The Swift-Braun feud has been causing celebrities to weigh in, especially due to Swift's blunt post about her feelings and Braun's high-profile client list, which includes Justin Bieber, Ariana Grande, and Demi Lovato. But it's Borchetta who had previously owned the rights to Swift's masters as she had been signed to his Big Machine label since she was only 15 years old, Rolling Stone reported. But that changed in November 2018. In a since-deleted Instagram post per Rolling Stone, Swift announced that she had signed with Republic Records and Universal Music Group. She noted how this new deal gave her more control over her own music. But that doesn't change the way the rights work for Taylor Swift, Fearless, Speak Now, Red, 1989, and Reputation.

"When I left my masters in Scott's hands, I made peace with the fact that eventually he would sell them. Never in my worst nightmares did I imagine the buyer would be Scooter," Swift wrote in her Tumble post. "Any time Scott Borchetta has heard the words 'Scooter Braun' escape my lips, it was when I was either crying or trying not to. He knew what he was doing; they both did." She also claimed that Big Machine had offered her the chance to earn the rights to the masters of one album for every new album she produced, but she turned that deal down.

Borchetta responded to Swift's Tumblr post in kind by saying that Swift could have owned her master recordings if she hadn't walked away from the Big Machine label. "Taylor had every chance in the world to own not just her master recordings, but every video, photograph, everything associated to her career. She chose to leave," he wrote. So Passman's latest statement from July 2 seems to be in direct response to that.

According to the music attorneys that The Hollywood Reporter spoke to, what Braun and Borchetta did is common industry practice. Variety also noted that she probably doesn't have any case legally. But clearly, Swift and her lawyer are not going to let the selling of her master recordings go down without a fight. Just what the outcome will be of this very public dispute is unclear and it seems like no one is taking Swift's own advice and calming down.