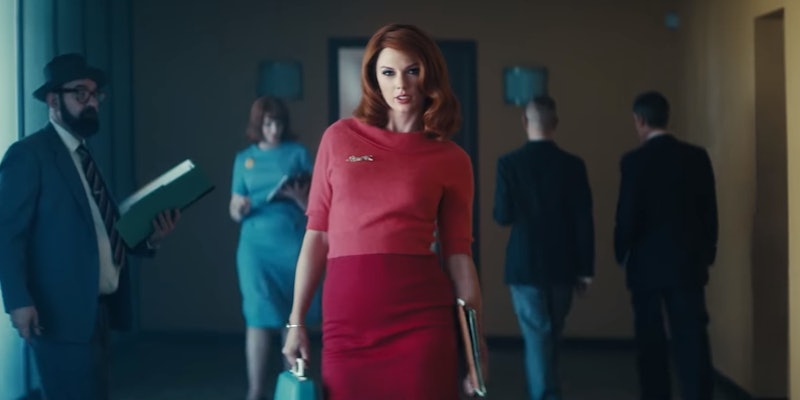 Remember a few summers ago, when Taylor Swift's retro-inspired wardrobe was a pillbox hat short of going full 1960s? Well, it finally happened — but not the way you might have expected. The Sugarland "Babe" video stars Taylor Swift as the other woman — gasp — in a saga whose styling is clearly inspired by the AMC hit series Mad Men. In "Babe", Sugarland's Jennifer Nettles stars as a housewife who is becoming increasingly aware of the fact that her executive husband is seeing a secretary from the office. The unfaithful husband is played by Legends of Tomorrow star Brandon Routh, who plays the strikingly handsome Don Draper type, with Taylor Swift leaning into the "snake" imagery as the cliché secretary-turned-mistress. No, really. Interestingly, her styling is more along the lines of Joan Holloway than any of Don Draper's actual mistresses from the show, but the look works; she's an undeniable vixen.

And this is where it gets even more interesting. Back in 2012, Swift co-wrote the song "Babe" with Train's Patrick Monahan. It was meant for her Red album, but didn't end up making the cut, and eventually, she offered the tune to country-pop act (and Big Machine label-mates) Sugarland. Swift also recorded the song with the band, providing backing vocals for Nettles.

So, let's unpack the "Babe" video — from a marriage breaking up over Swift's character to the video's unexpected ending. First, watch the video starring Swift and Routh below:

Okay, first of all: This so sounds like a Red-era Taylor Swift song. It just does. It's almost unexpected to hear Nettles singing lead, when a "This is the last time I'll ever call you Babe" kiss-off is so gloriously Swiftian. It's a wholesome eff-you, meant to sting on more than one level. She's calling a partner by a pet name for the final time, but also ceasing contact with them after uncovering the infidelity. So it's the last time she'll ever call this person "babe," but also the final time she'll call them, babe. Being able to hit a sweet nickname with venom is an old-school Swift talent, and Nettles rocks it here. You can feel the anger, the betrayal, and the empowerment just from her performance — and all with family-friendly wordplay.

So much of Swift's public persona has hinged on her being the underdog, the all-American sweetheart, the girl-next-door — sometimes even literally, as immortalized in the video for "You Belong With Me". Her earlier songs contain themes of the groom running away with her instead of an unpleasant bride, or a longtime love finally proposing, or the small, intimate things couples in love share. Her entire brand was built on "I'm like you, not her." To see her in a red wig, vamping it up, stepping out with a married man in "Babe"? The scandal! It all fits into her reputation-era branding, though. It's as if Swift saw the negative media attention she'd received and thought, okay! You want me to be a snake? I'll be a snake. Here I am. Look at me. Bein' a snake. Gone is the aw-shucks humility, or the cartoonishly man-eating portrayal of herself from "Blank Space". Here, she's fully leaned in to being the so-called "mean" girl.

Any earlier in her career, and this would cause extreme cognitive dissonance among Swifties. It might even have earned her some less-than-glowing feedback from fans. Today, though, she's expertly re-fashioned herself in the image of the eye-rolling femme fatale. It's genius, really. And even though Swift's character in the "Babe" video is sneaking around with a married dude, during and after work, there's a twist toward the end. No spoilers, but let's just say that — in Swiftian fashion — there's only one winner in this scenario. Okay, two winners: [Redacted], and the fans. Because, let's be real: She is pulling that role off.