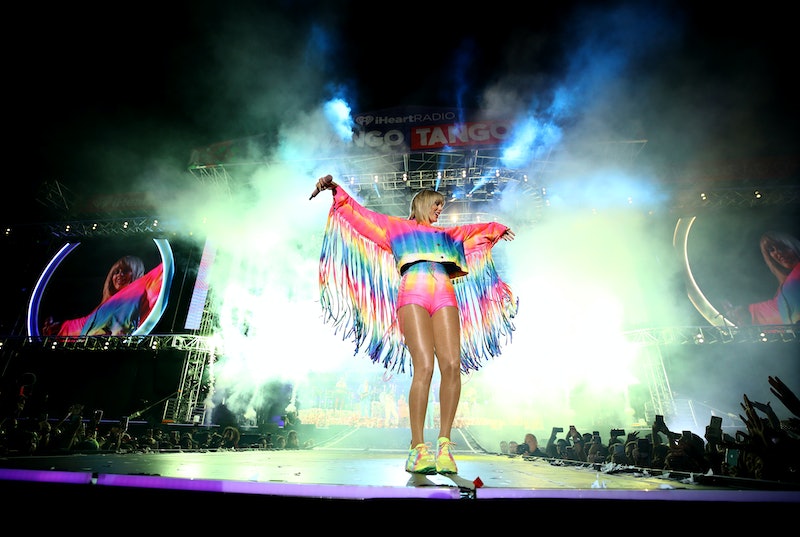 The entertainment industry still has a gender pay gap, and Forbes' Celebrity 100 list of the world's highest-paid entertainers of 2019 only makes it more evident. At first glance, the results of the list seem like a huge win for women, since the top two spots went to female celebrities: Taylor Swift earned the #1 spot with $185 million, and Kylie Jenner ranked at #2 with $170 million. Despite Swift and Jenner's success, however, the total list was overwhelmingly male.

With her ranking, Swift made history, becoming the first musician to be #1 on the Celeb 100 list twice — her first time was in 2016, with an income of $170 million. Forbes reported that this time, much of Swift's income came from touring her album Reputation in stadiums worldwide. The tour ran for over six months and became the highest-grossing tour in U.S. history, raking in $345 million. Swift also partnered with Netflix to release Taylor Swift: The Reputation Concert Tour. Her spot on the list comes on the heels of the highly publicized Scooter Braun controversy, after which Swift no longer owns her previous music, the Reputation album included.

Jenner, on the other hand, makes most of her money through her business, Kylie Cosmetics. Forbes previously referred to Jenner as a "self-made billionaire" in a March interview, a title that sparked internet outrage because of Jenner's family connections. While it's true that three other members of the extended Kardashian-Jenner clan ranked in the top 100 (Kanye West at #3, Kim Kardashian at #26, and Travis Scott at #39), Forbes noted that Jenner does own 100% of her company. Jenner is also one of the youngest celebrities to make the cut at 21 years old, second only to 20-year-old Shawn Mendes, who ranked at #98.

Out of the 100 people on the list, only 16 women made the cut. The magazine's annual list calculates the pretax income of what they call "front of the camera" stars over the period of one year, starting on June 1. After determining the overall 100 highest-paid celebs, Forbes broke the list down into categories: musicians, athletes, personalities, actors, authors, comedians, and magicians.

Half of those 16 women were musicians, a category that made up almost 40% of the entire list. None of the 34 athletes on the list were women, by far the largest disparity — while there were no female comedians or magicians, either, those categories only contained two and one entertainers, respectively. Only two female actors — Scarlett Johansson and Sofía Vergara — appeared, while nine male actors nabbed a spot on the list. Johansson's rank at #47, with $56 million, is even more bleak when contrasted with her Marvel costars: Though she is far from the only woman in the Marvel cinematic universe, she was the only female Marvel actor compared to five Marvel men.

The lack of female athletes is especially upsetting after the U.S. Women's National Soccer Team took home the trophy from the Women's World Cup, shining a light on the pay disparity in the sports industry. Considering the top three male athletes — Lionel Messi, Cristiano Ronaldo, and Neymar — are all soccer players, the inequality is glaring.

Forbes also reported that many of the women on the list aren't getting paid solely from their actual entertainment careers. Instead, they're also making income from doing business, like #36 Rihanna with Fenty Beauty or Kardashian with KKW Beauty.

While seeing two women at the top like Swift and Jenner is a welcome change, the Celeb 100 list proves the entertainment industry still has a long way to go.

More like this
Kim Kardashian & Kylie Jenner Squabble Over Skims On Instagram
By Alyssa Lapid
Kylie Jenner Clarified How To Pronounce Her Son's New Name
By Jake Viswanath
The Ticketmaster Senate Hearing & Taylor Swift Tickets Debacle, Explained
By Jake Viswanath
"Lavender Haze" Star Laith Ashley Breaks Down Filming With Taylor Swift
By Jake Viswanath
Get Even More From Bustle — Sign Up For The Newsletter
From hair trends to relationship advice, our daily newsletter has everything you need to sound like a person who’s on TikTok, even if you aren’t.