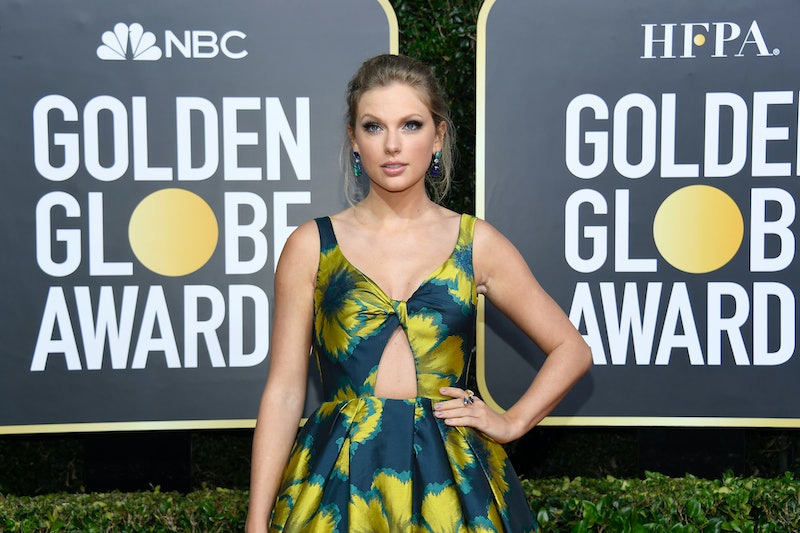 There's no need for Swifties to be mad this spring — just very, very glad. On Tuesday, January 6, GLAAD announced that Taylor Swift will receive the 2020 Vanguard Award at the organization's 31st annual ceremony in April, in order to celebrate the singer's work as an ally for the LGBTQ+ community and her advocacy for equal rights and acceptance. In addition to Swift, GLAAD will honor writer and Pose producer Janet Mock, with more nominees to be announced on Jan. 8.

"From boldly standing up against anti-LGBTQ elected officials to shining attention on the urgent need to protect LGBTQ people from discrimination through the Equality Act, Taylor Swift proudly uses her unique ability to influence pop culture to promote LGBTQ acceptance," GLAAD President and CEO Sarah Kate Ellis said in a statement, per E! News. "In a time of political and cultural division, Taylor creates music that unites and calls on her massive fan following to speak up and call for change." (Bustle has also reached out to representatives for Swift for comment, but have not heard back.)

Over the past few years, Swift has become more outspoken about her political beliefs, beginning with her October 2018 Instagram post endorsing Phil Bredesen in the Tennessee State Senate race. "I always have and always will cast my vote based on which candidate will protect and fight for the human rights I believe we all deserve in this country," Swift wrote at the time. "I believe in the fight for LGBTQ rights, and that any form of discrimination based on sexual orientation or gender is WRONG."

In June 2019, the singer made her support of the LGBTQ+ community even more explicit with the release of her single "You Need To Calm Down," which contains the lyrics "Why are you mad when you can be GLAAD?" and "shade never made anybody less gay." After the track was released, GLAAD reported that they had received an influx of donations from Swift's fans, as well as a generous gift from the singer herself, according to TMZ.

She followed that up with the release of her star-studded music video for the track, which featured cameos from LGBTQ+ celebrities like the Queer Eye Fab 5, Hayley Kiyoko, Laverne Cox, RuPaul and Todrick Hall. At the end of the clip, Swift encouraged her fans to celebrate Pride Month by signing a petition in support of the Equality Act, which would protect LGBTQ+ people from being discriminated against because of their sexual orientation.

"Our country’s lack of protection for its own citizens ensures that LGBTQ people must live in fear that their lives could be turned upside down by an employer or landlord who is homophobic or transphobic," Swift wrote on Instagram in June, to announce that she would spend Pride Month fighting for equal rights. "Let’s show our pride by demanding that, on a national level, our laws truly treat all of our citizens equally."