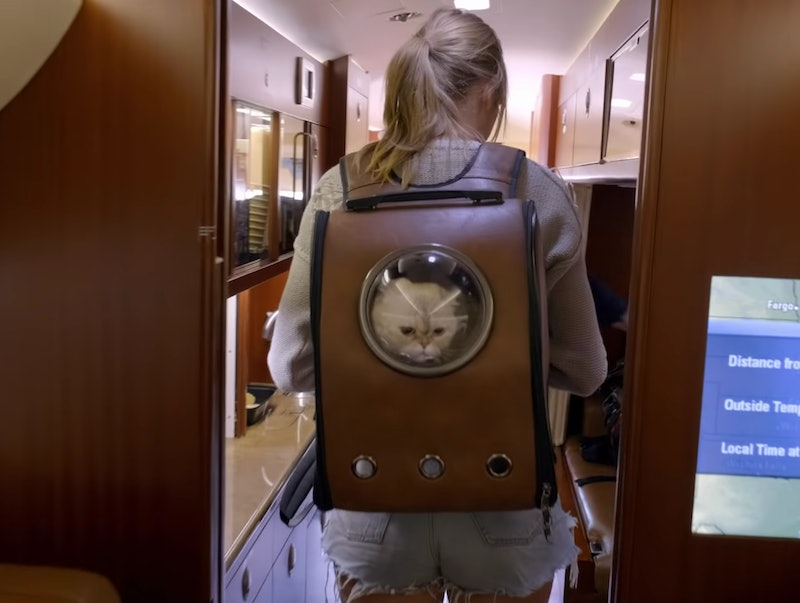 Netflix’s recently released documentary on Taylor Swift, Miss Americana, leaves us with as many questions as it does answers: is Taylor Swift engaged? Does the singer still have beef with people she name-dropped in the film like comedian Nikki Glaser? Most importantly, where did Taylor Swift get that cat backpack we see her carrying her Scottish fold Olivia in while on a private jet? While some of the former questions may be up in the air, we can say this with certainty: we have secured the shop location of that excellent cat backpack. The extra good news? It’s (relatively) affordable.

Thanks to the thorough cat journalism of Vulture writer Devon Sherer, who wrote that she has the same pet carrier that Swift sports in the film, we know you can buy the bubble window cat carrier on Amazon. The carrier comes courtesy of Amazon seller ANXUAN and is available for just under $50 in both pink and yellow. It’s also Prime eligible so you can—oh, I don’t know—only wait to days to put your cat in the cat carrier while the two of you rewatch Miss Americana for the thirteenth time.

Unfortunately, if you were hoping to match Swift’s brown cat carrier exactly, you’ll have to pay a pretty steep up-charge. At least one person is selling the ANXUAN portable pet carrier on eBay for $76.99. (Not sure the $25 extra is worth it. I mean, it doesn't come with a miniature stuffed replica of Meredith or anything.)

But does Taylor Swift, famed mother of three (cats), have as good a taste in cat carriers as she does, say, cat names? That depends on who you ask. With 41 Amazon reviews, the pet backpack has a 4.3 out of 5 star rating. The positive Amazon reviews are overwhelmingly so. There’s a lot of all caps and multiple exclamation points. One reviewer, who said their kitten was a fan, recommended cozying up the carrier with blankets and toys, as well as leaving the backpack open on the floor so your cat could come and go from it. “He was totally comfortable because he had been in it so much beforehand,” that reviewer said.

As far as negatives reviews go, most of the one-star ratings are attributed to the fact that their cat just didn’t like the backpack. (Another small handful said the backpack broke shortly after using it, but those appear to be in the minority.) In other words, not even a Taylor Swift-approved cat backpack will make the most finicky of cats a fan.

Fellow dog owners, fear not: if you own a small dog—like, “size of most cats” small—the backpack will also suit your sweet pup. If you’re looking a way for the world to enjoy your pet (without you having to interact with a bunch of strangers who want to pet your dog), perhaps this bubble window backpack is for you and your furry friend.