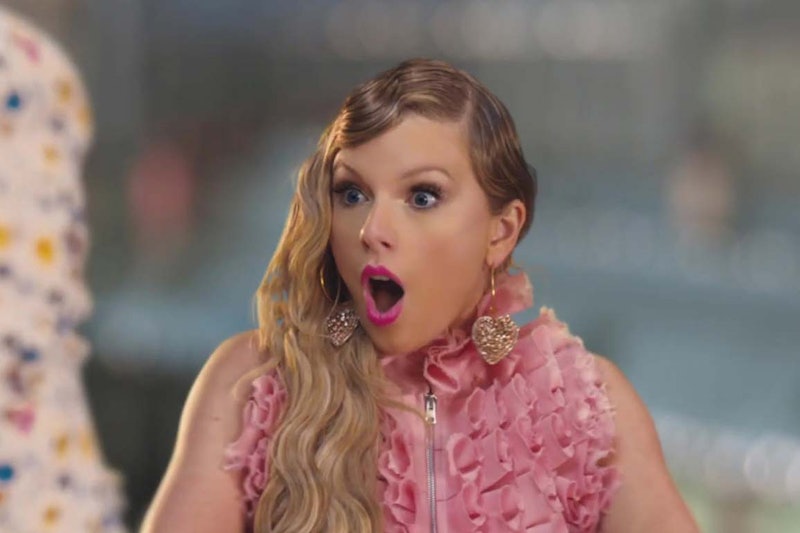 Spelling has officially been canceled. After excitedly telling fans that "spelling is fun," Taylor Swift seems to have changed her mind. Swift changed "ME!" lyrics to remove the one about spelling from the final version of the Lover track on iTunes and Apple Music. While some are happy to see it go, many fans are very S-A-D about it, and they're making it known on Twitter.

Listen to the bridge of "ME!" featuring Brendon Urie on Apple Music and it'll sound a little different. At the one minute and 53 second mark, Swift no longer exclaims "spelling is fun!" Instead, it skips right over that line and starts back up with Urie giving his own spelling lesson. "Girl, there ain't no 'I' in team," he sings, before Swift responds, "But you know there is a me."

So no, the spelling hasn't entirely gone missing from the new version of the track. But, Swift's enthusiasm for it seems to have waned just a little. The line might more accurately be "spelling is okay, I guess," but that's really not as catchy.

As of now, it's unclear why Swift removed that part from the Apple version. (Fans can still hear the line in the Spotify version—at least for now.) However, some believe the line got the boot because a lot of people really didn't like it. That they thought it was silly or corny.

However, Swift made it clear that was the point of the line. “With this song, we really just wanted to have this song not really be fully taking itself seriously,” Swift told Australia's The Hit Network’s Carrie and Tommy. “So the lyrics, that’s a tone decision that we made in the studio. We literally were like, OK, let’s say ‘Hey, kids! Spelling is fun’ because we want everyone to know that this song is not really serious because it’s not, like, a serious love song.”

But, there are those who are sad to see it go. After all, for the last four months, they've been singing along, why would they want to stop now? "Please put the spelling is fun lyric back in 'ME!' it was one of my favorite lyrics literally BECAUSE it was cheesy! please put it back," a fan named @TrevorWhaley tweeted.

While another fan had a message for the haters. "All y’all that bullied Taylor Swift into removing 'Spelling is fun!' from ME! don’t deserve to get to hear Lover OR her rerecorded music," @bookareida tweeted.

Don't worry, not all Swifties are letting the line go without a fight. When Swift played "ME!" during her Good Morning America concert on Thursday (Aug. 22), she didn't say the "spelling is fun" line. But, her fans sure did.

Some fans admitted they got "emotional" hearing the line again. While another, thought it was the truest form of fandom. "To all the fans at @GMA who shouted out 'spelling is fun,'" a Twitter user named @cruelsummer07 tweeted, "thank you for your service."

The spelling line might be gone from "ME!," but fans certainly haven't forgotten it. And it seems they won't stop singing it, even if Swift has.

More like this
Twitter Is In Awe Of Taylor Swift’s “Lavender Haze” Music Video
By Jake Viswanath
8 Easter Eggs From Taylor Swift's “Lavender Haze” Music Video
By Shahed Ezaydi
The History Of Taylor Swift's "All Too Well" & What The Lyrics Actually Mean
By Jake Viswanath
Taylor Lautner Thought Taylor Swift's 2009 VMAs Interruption Was A "Skit"
By Alyssa Lapid
Get Even More From Bustle — Sign Up For The Newsletter
From hair trends to relationship advice, our daily newsletter has everything you need to sound like a person who’s on TikTok, even if you aren’t.