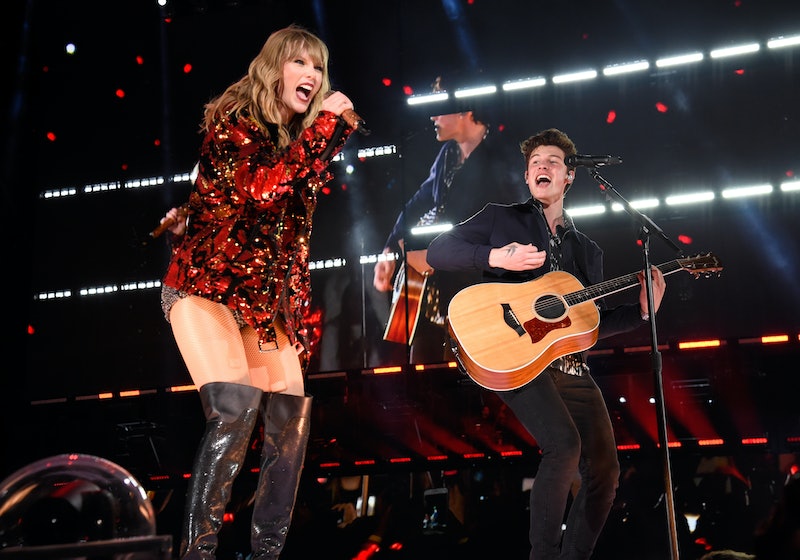 How do you make one of Taylor Swift's enchanting love songs even more romantic? By adding the Internet's singer-songwriter crush to join in. Taylor Swift and Shawn Mendes collaborated on a new "Lover" remix, released on Wednesday, Nov. 13. And not only does this version of "Lover" now feature Mendes' delicate vocals, it includes brand new lyrics written by the heartthrob himself.

Sonically, the remix stayed pretty true to the original song, with some holiday-appropriate chimes added to the intro. But lyrically, Mendes gives a new dimension to "Lover," turning the song into a heartfelt romantic duet. "We could light a bunch of candles and dance around the kitchen, baby," he sings in the second verse. "Pictures of when we were young, would hang on the wall." There's even a Titanic reference in the song's wedding vow-style bridge, so basically all of the romantic scenarios are covered.

Although he's dueting with Swift, fans are already suggesting that Mendes is actually singing about Camila Cabello, his current girlfriend and "Señorita" collaborator. And given his penchant for opening up about his love life through song, would it really be a huge surprise?

Swift announced the new remix in a video posted to her social media accounts, calling the song a "collaborashawn" in the caption. "Sending out a whole entire THANKS BUDDY to @ShawnMendes rn," she said. In the video, she described Mendes as someone that she's "always really been dying to collaborate with" and explained why she thought it was necessary for him to rewrite some of the song, which the singer originally wrote by herself.

"He has taken 'Lover' and he has rewritten parts of it, which I think is so important because I love him as a writer," she said. "And I also think that everybody would write a different love letter to their lover, and I think his take on it is so beautiful." Mendes also posted about the remix on Twitter, thanking Swift for "letting me join you on such a beautiful song."

While the collaboration came as a surprise to fans given its sudden release, it's truly been a long time coming. Mendes opened for Swift at stadium shows on her 1989 World Tour, just as his star was rising, and their friendship has stayed strong ever since.

Most recently, Mendes pay tribute to Swift by writing an essay celebrating her spot in the TIME 100 back when the annual list was published in April 2019. “I’ve been a Taylor Swift fan for as long as I can remember,” he wrote at the time. “But it wasn’t until I met and got to know her that I understood how wonderful a person she truly is." Apparently, the feeling is mutual.