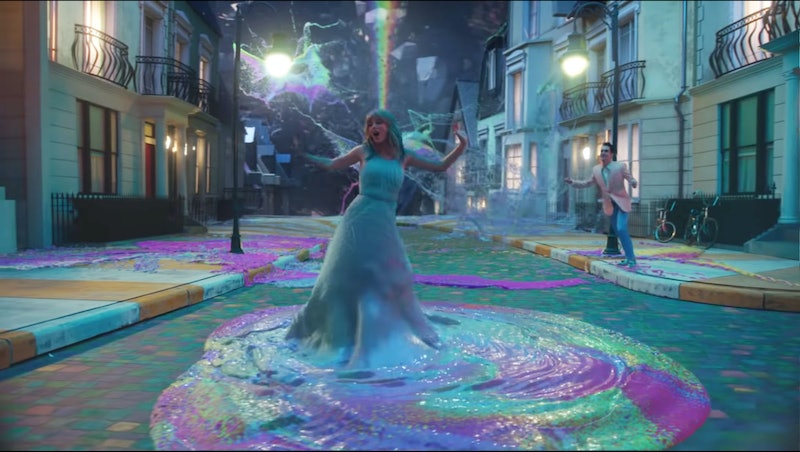 Taylor Swift fans are having a very good day. The pop music phenom has officially dropped a new song and music video entitled "ME!" with Panic! At The Disco singer Brendon Urie. In Taylor Swift's "ME!" music video, the singer may actually be wearing a repeat look from her "Look What You Made Me Do" video according to fans. Planting an easter eggs for her most loyal followers wouldn't exactly be unusual for the star.

Taylor Swift has been counting down the launch of her new music for a few days with a ticker on her Instagram stories. Now, on April 26, the world finally has her new single "ME!" which is basically a technicolor, butterfly-filled fantasy land in the best way possible. From the looks of things, Swift seems to be moving away from the tougher image of her Reputation album. In fact, at the beginning of the new music video, a snake (a symbol Swift used liberally during the Reputation era) can be seen slithering across the screen before turning into a swarm of butterflies.

A savvy fan on Twitter, however, seems to think there's another easter egg in Swift's new video: the blue dress that she first wore in "Out of the Woods" video and repurposed for "Look What You Made Me Do."

Twitter user @enchantedlymine took to social media to share what seems to be an easter egg in the video of Swift wearing the blue dress again in all of its original glory. The user wrote, "It's the same dress guys," in all capital letters and tagged the Taylor Nation fan Twitter.

While the dresses certainly do look similar, though, it unfortunately doesn't seem to be the exact same one.

In the video, you can see that Swift actually has her hair dip-dyed blue which makes the straps appear to be the same as the original dress. However, both the neckline and the straps are different on the "ME!" dress than in the "Look What You Made Me Do" and "Out of the Woods" music videos.

Just because the dress is different, however, doesn't mean that Swift may not have meant to draw the comparison. After all, Easter eggs for fans are kind of her thing, and the "Look What Made You Made Me Do" video was filled with them. From the re-wear of the blue dress to the references to her former feud with Kim Kardashian and Kanye West, Swift is always adding additional meaning to her work, and given that the dress in the "ME!" video is similar and the exact same color, there's still a chance that the frock means something to fans.

In fact, in an interview with Robin Roberts on April 25, a few days before the new single and video landed, Swift explained that she loves when fans turn into sleuths and find meaning in her work. She says that the fans' detective work, "makes it fun for me to create music, to create music videos, knowing that they'll care about little Easter eggs or clues or hints."

While Swift's blue dress in the "ME!" music video may not be the same one from her past work, don't discount the theory. Swift appears to love leaving clues for her fans, and this could still be one of them.