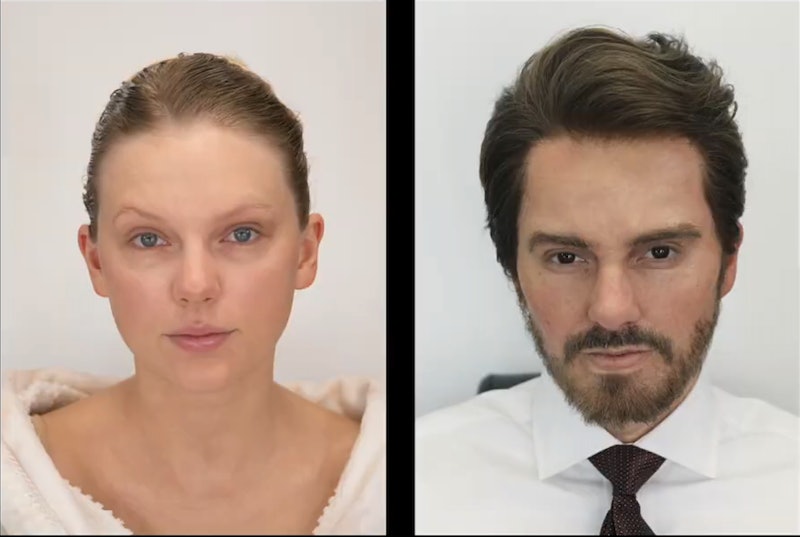 Swifties, meet Tyler Swift, the star of Taylor Swift's new "The Man" music video. Swift made her biggest transformation yet in her latest project, which featured her going undercover as a man, and benefitting from all the privilege that comes with her new identity. She is virtually unrecognizable, completely disguised under makeup and prosthetics that turned her into "The Man," and it might be her biggest transformation yet.

"The Man" marks Swift's first solo-directing debut, and she held absolutely nothing back. From shinning a light on what male privilege looks like in everyday life, to calling out Scooter Braun, the singer went after double standards and sexism, all while wearing a fake beard. Though, if you didn't recognize Swift at first, you'd be forgiven. The singer truly disappears into her role as "The Man." Whether he's manspreading on the subway or being hailed as the "World's Greatest Dad" for taking his daughter to the park, Tyler Swift is the embodiment of white male privilege. He even has his face on $100 bills, and his own documentary, Mr. Americana, premiering at "Mandance," a clear reference to Swift's own doc, Miss Americana. It's all very meta, and very direct — and pretty in line with "The Man" lyrics themselves.

Swift's video is full of references to misogynistic judgments of her career. Small details, like headlines on the newspaper Tyler reads on the subway and advertisements promoting Scotch that allows you to "capitalize on the feeling," which seem to take aim at the critiques that Swift is too emotional, and writes too much about her dating lie.

And the video also seems to take aim at sexist criticisms launched at other powerful, famous women, like Serena Williams. The tennis scene at the end, which features Tyler Swift playing a game for "Women's Charity" and getting so mad at the ref, he smashes his racket and berates him, seems like a response to the sexist criticism of Serena Williams. In 2018, Williams was punished for expressing frustration at a ref, a direct contrast to male players like John McEnroe, known for throwing major tantrums on the court when things weren't going their way, but who were rarely penalized for their behavior.

For her final blow to the patriarchy, Swift ends the video appearing as herself, the director, telling "Tyler" to do another take of his tennis court meltdown. "Could you try to be sexier? Maybe more likable this time?" she says, before she proceeds to praise the female actor, who basically just stands on the sidelines of the scene. Points were made.