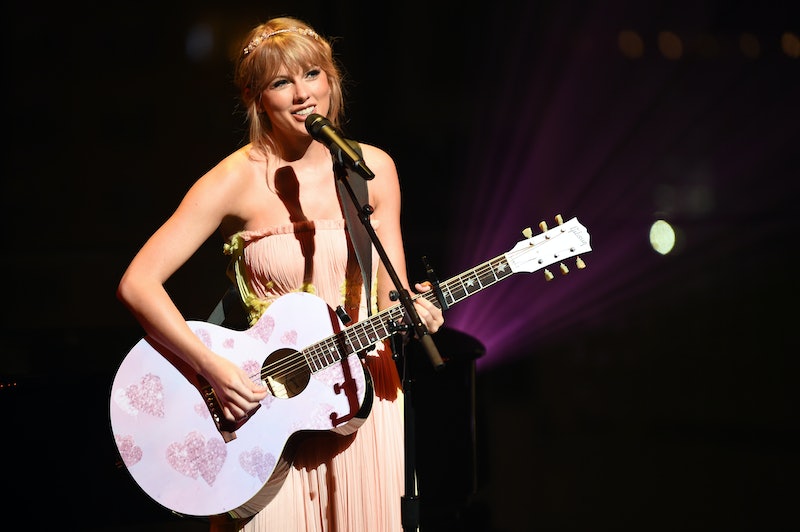 Last week, Taylor Swift landed a spot on the TIME 100, the publication’s annual list of the world’s most influential people, and to celebrate the milestone, Swift performed at the TIME 100 Gala in New York City on Tuesday, April 23, impressing her fellow honorees in the audience, but it was what she said, not sang, that caught the attention of social media. Taylor Swift’s speech at the TIME 100 Gala about songwriting may hint at what’s to come on Friday, April 26, the date that she’s been endlessly teasing since April 13.

Swift took the stage at the Gala and delivered rousing acoustic renditions of hits like “Style,” “Delicate,” and “Love Story” to a celeb-filled audience, which included Sandra Oh, Brie Larson, and fellow singer Khalid. After her opening number, Swift thanked TIME for the honor and acknowledged how she received it to begin with: her songwriting (and writing the occasional op-ed and Instagram caption, as she joked).

“I’ve always known that it was the main pillar holding up my career. I’ve always known it was the main pillar of kind of my sanity as well,” she said on stage about writing, as reported by Variety. “I think that when you write about your life, it gives you the ability to process your life. I use it as a way of justifying things that have happened to me, whether they're good or bad. I like to honor the good times and really process the bad times when I write.”

She explained that songwriting acted as a form of healing for her, even back when she was in middle school. “I first started writing when I was 12, and when I’d be at school and I’d have a really bad day and nobody wanted to talk to me or something, I’d just sit there and go like, ‘Okay, I’m gonna write a song about this when I get home.’ And when I’d write that song, maybe I’ll feel like, this day was worth it. Like it sucked, but it was maybe worth it if I write something about this feeling that I’m proud of.”

Swift also took the opportunity to pay homage to the female writers that came before her, specifically mentioning Nora Ephron. “I love that so many women came before me and opened the door that I now get to walk through, who were writing about their lives, and I’m so grateful for that opportunity,” she remarked. “I think that one of my favorite things about female writers, about writers in general, about people who take what happens to them and they process it and they put it out into the world, is if you write, you can turn your lessons into your legacy.”

Swift’s decision to dedicate a whole speech to songwriting could be yet another hint that new music is coming on April 26, marking the start of a whole new era in her career. The morning after the Gala, on Wednesday, the singer posted yet another mysterious photo to social media, this time showing flowers in a metallic rose gold vase, a canister of alcohol, and what looks like a corresponding cocktail-making kit. As she proved with some lyrics throughout Reputation, we know Swift enjoys a good drink.

Some fans have speculated that all of Swift's mysterious photos thus far are snapshots of props or set-ups from an upcoming music video, a theory which would tie all of these teasers together. Other fans are speculating that she will return to her Speak Now country sound after they re-discovered a vintage photo reminiscent of the one she posted of her TIME 100 Gala look. Whether she's going country, staying pop, or veering into a totally new direction, the world is all ears without hearing a single peek at what's to come on April 26.