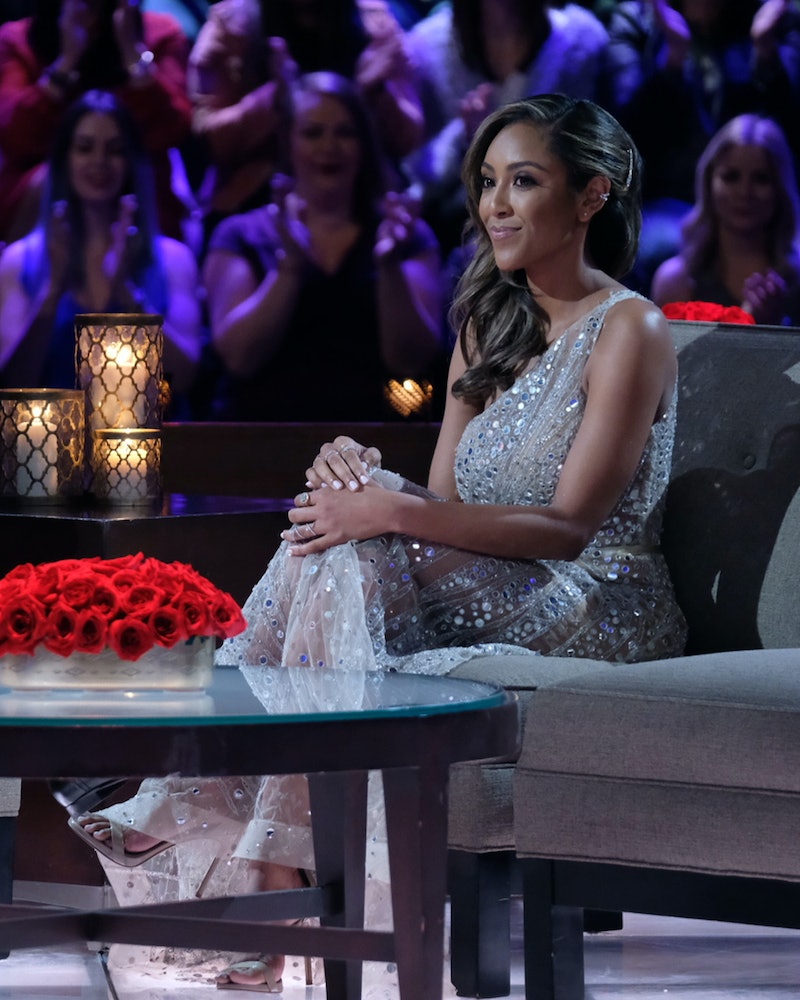 During The Bachelor finale, it was officially announced that Hannah B. had become the next Bachelorette. However, prior to that reveal, there was said to be four other possible women in the running, including Tayshia Adams, who was part of Colton's final three contestants. And while she didn't end up getting the gig in the end, Tayshia's comments about The Bachelorette and how her season would've been different will make you wish she had.

During a recent interview with Vulture, Tayshia discussed what could've been had ABC higher-ups decided to offer her the Bachelorette crown (or should we say rose?) and her response pretty much just reaffirms why she totally deserved to be chosen. "I might be more tough on the guys, in the sense I’d need them to stand up a little bit more than Hannah," Tayshia told the outlet, when asked how her season would compare to Hannah B.'s. "She’s pretty fun and doesn’t take herself too seriously all the time."

As for the contestants themselves, Tayshia also added that here guys would differ from Hannah's in a very significant way. "The guys would definitely have to be much older, I’d tell you that much," Tayshia explained. "I require a little bit more life experience, someone who really knows who they are and still aren’t trying to figure themselves out. Show up, or get out. No bullsh*t, let’s go, I’m trying to find a husband!"

During Colton's season of The Bachelor, Tayshia became an instant standout for her kind demeanor and genuine desire to be there to find love. And when Colton went to her room to break up with her after he decided to pursue Cassie, she conducted herself with nothing but poise and grace despite the fact that she was heartbroken. Even now, when she still has every right to be hurt and upset by what happened, Tayshia has nothing but nice things to say about both Colton and Cassie. "They look very, very happy," she admitted.

That being said, she still stands by her comments that she made to Colton during the season about how she didn't believe Cassie was ready for marriage — a statement that turned out to be true. "As far as the comment I made in Denver, that was the deal at the time and I stand by it," Tayshia stated, while adding:

"I was unfortunately put on the spot and asked about it by someone who valued my opinion about other women. Maybe I shouldn’t have done that, but those were my feelings at the time and I needed to vocalize what was going on in the house. It is what it is. I didn’t make up that conversation. I think it would’ve been very different if I ran to him and was a tattle-tale. I wasn’t going to lie to his face if he asked me something."

Though she did enjoy some of the tweets that came out after it was revealed that she'd been telling the truth the whole time. "I did see a few good ones," Tayshia joked. "The people out there are really, really hilarious. Even for my family at Hometowns. Bachelor viewers are clever. I appreciated the jokes."

Between her Bachelorette comments and having such a great sense of humor, it's a shame Tayshia won't be handing out roses this May. Let's just hope she'll be making an appearance in Paradise instead. Fingers crossed!

More like this
Clayton & Susie Broke Up, Citing "A Significant Amount Of Pain" After 'The Bachelor'
By Jordyn Tilchen
Kesha Is Down To Be The Next Bachelorette
By Jake Viswanath
Kira's Post-'Bachelor In Paradise' Activity Has Included Travel, TikTok, & Tea
By Grace Wehniainen
Why Did Teddi Leave 'Bachelor In Paradise'?
By Kadin Burnett
Get Even More From Bustle — Sign Up For The Newsletter