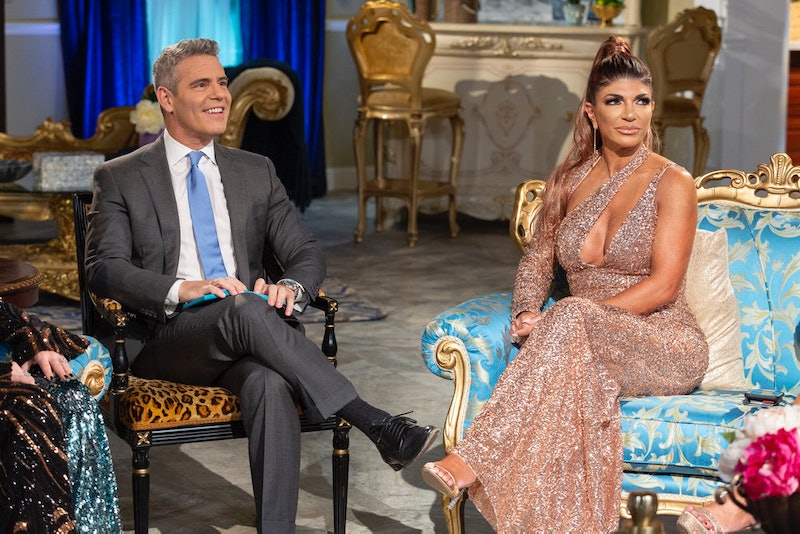 Even though Joe Giudice hasn't appeared on Real Housewives of New Jersey in years, he's been a main topic of conversation lately. Well, more accurately, his relationship with Teresa Giudice has been a main topic of conversation. Us Weekly released a clip from the March 6 reunion episode, where Teresa confirmed she and Joe will split if he gets deported to Italy after he's released from prison this month.

In US Weekly's teaser from the upcoming episode, reunion host Andy Cohen told Teresa, "This man is the one and only love of your life, but what you’re saying is that you would split up … that’s what you’re saying." In response, the RHONJ OG explained how their four daughters factor into that decision. She said, "I mean, unless my kids say, 'mommy I want to move to Italy.'"

"Gia’s going to college next year. I haven’t spoken to Milania or Audriana about it, we haven’t gotten there yet; and Gabriella already voiced her opinion to me. She was like, ‘That would be so hard for me, mommy.’ She doesn’t speak the language. She’s like, ‘That would kill me even more.’”

Not moving to Italy isn't the only thing that Teresa revealed. She also confirmed that her relationship with Joe will end if he does wind up getting deported, declaring, "I’m not doing a long-distance relationship. I’m not doing it." She explained, "You know, I want somebody with me every day."

Aside from those major revelations, Teresa mentioned something fans are already aware of: her four daughters have "been through so much already." Aside from the ups and downs that come with sharing their lives on TV, the Giudice girls have endured some major tough times.

Their parents plead guilty to 39 counts of fraud in 2014. Consequently, Teresa spent 11 months in prison and Joe was sentenced to a 41-month prison stint. Thankfully, they got to serve their sentences at different times for the sake of their daughters.

It originally seemed like the family's life would go back to normal after Joe's release from prison in March 2019. Unfortunately, they got hit with some devastating news: On Oct. 10 2018, a judge reportedly declared that Joe will be deported to Italy, instead of returning home to New Jersey.

According an October 2018 article from RadarOnline, Judge John Ellington reportedly told Joe, "Based upon the law, I find you deportable and ineligible for any kind of relief." As of this moment, it is unclear if the father of four will be deported or not. Joe and his legal team applied for an appeal, but no announcement has been made.

While Joe's fate has been up in the air, Teresa had remained publicly optimistic for the past few months — at least before the reunion taping. In an October 2018 interview with Entertainment Tonight, Teresa insisted that the Giudices would stick together. When she was asked if she would ever divorce Joe, Teresa declared, "No, we're going to be a family, and we're going to fight this and get through this."

That is a far cry from Teresa's reunion remarks, but a lot can change in five months. Now it's March 2019, the month when Joe's prison term will end. At this point, Teresa and her children are waiting to see if the judge grants Joe's appeal or not.