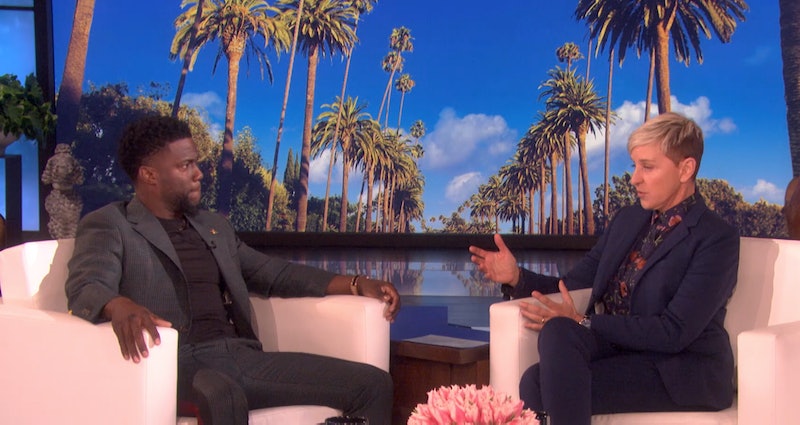 It's January, awards season is officially upon us, and yet the 2019 Academy Awards still don't have a host. But Ellen DeGeneres is trying to change that. In an interview on The Ellen DeGeneres Show that will air on Friday, Jan. 4, DeGeneres supported Kevin Hart hosting the Oscars. After initially accepting the hosting gig, Hart stepped down when some of his past homophobic tweets resurfaced and received negative attention. A month later, Hart sat down with the daytime talk show host to discuss the situation for an hour-long interview in which DeGeneres made her stance very clear: She wants Hart to host the 2019 Oscars and she even called the Academy to facilitate that happening.

UPDATE: As backlash for the interview grew online, DeGeneres appeared to double down on her decision to have Kevin Hart appear on her show and endorse him to host the Oscars. She promoted the interview on Twitter Friday afternoon, writing, "However you feel about this, the only positive way through it is to talk about it. Thank you for being here, @KevinHart4real. [heart emoji]."

EARLIER: Hart was apparently scheduled to appear on The Ellen DeGeneres Show to promote his new film, The Upside. But DeGeneres, who noted that she's a friend of the comedian, chose to have Hart on for the entire hour to discuss the Oscars host controversy. The comedian is a past Oscars host herself (taking on the job in both 2007 and 2014) and she revealed in the interview that she called the Academy to see if they would still want Hart to host. She said:

"I called them. I said, 'Kevin's on, I have no idea if he wants to come back and host, but what are your thoughts?' And they were like, 'Oh my God, we want him to host. We feel like that maybe he misunderstood or it was handled wrong or maybe we said the wrong thing, but we want him to host. Whatever we can do we would be thrilled.'"

Bustle reached out to the Academy about DeGeneres' comments and had not received a response at the time of publication.

As he recounted in his interview with DeGeneres, when Hart was first given the Oscars hosting job, he noted it had been a longtime goal of his. But shortly after the news was announced, old problematic tweets and jokes of his resurfaced — jokes and statements that were insulting to the LGBTQ community and used gay slurs. Hart then claimed in an Instagram video that the Academy had demanded he apologize for these tweets and jokes, something he repeated in his interview, calling it an "ultimatum." But Hart initially refused to apologize, claiming that he already had in the past. And he ended up choosing to step down from the hosting gig voluntarily via Twitter.

During the interview, DeGeneres noted that "as a gay person," she is sensitive to the language Hart used, but she believes he has grown since those jokes. "You've already expressed that it's not being educated on the subject, not realizing how dangerous those words are, not realizing how many kids are killed for being gay or beaten up every day," she said. And that's why the comedian says she's campaigning for Hart to host the 2019 Oscars. "You have grown, you have apologized, you're apologizing again right now. You've done it. Don't let those people win, host the Oscars."

She also tweeted another clip of the interview where Hart explained his side and wrote, "I believe in forgiveness. I believe in second chances. And I believe in @KevinHart4real."

Reflecting on the events with DeGeneres, Hart explained that he believed the bringing up of his old tweets was a targeted attack to ruin his reputation. "This wasn't an accident. This wasn't a coincidence. It wasn't a coincidence that the day after I received the job that tweets just somehow manifested from 2008," he said. "That's an attack, that's a malicious attack on my character, that's an attack to end me, that's not an attack to just stop the Oscars."

He also stated that he didn't want to apologize again because "somebody has to take a stand against the quote-unquote trolls." DeGeneres replied, "But they're going to win if you don't host the Oscars." She added, "For [the trolls] to stop you from your dream, from what you wanted to do, and what you have a right do — what you should be doing — it's why they haven't found another host. I think [the Academy] were secretly hoping you would come back and I'm praying that this happens."

DeGeneres continued: "There are so many haters out there. Whatever is going on the internet, don't pay attention to them. That's a small group of people being very, very loud. We're a huge group of people who love you and want to see you host the Oscars."

There are, of course, also plenty of people who do not want Hart to host the Academy Awards. And DeGeneres is now receiving backlash for characterizing the people with concerns as "haters" and "trolls." As BuzzFeed reporter Adam B. Vary wrote in a series of tweets:

"The host of the Oscars had made anti-gay jokes, and LGBT people who love the Oscars were legitimately startled to see just how harsh his words were. It wasn't a mob of people out to get Kevin Hart. It was a group of people who wanted to understand Hart's thinking about those hurtful tweets & his stand-up jokes."

By the end of the interview, Hart said that he would consider reclaiming the job to host the Oscars. "Leaving here, I'm promising you I'm evaluating this conversation," Hart said. "So, let me assess, just to sit in this space and really think, and you and I will talk before anything else."

DeGeneres seems hopeful that Hart will be this year's Oscar host after all, and she may very well get her wish. Even before the interview surfaced, People reported that the Academy was considering inviting him back. "There has been a steady stream of buzz that things might work out between Kevin and the Academy," a source reportedly told the magazine.

The Oscars don't have a host right now, but it sounds like they might find one soon. That is, if DeGeneres has anything to say about it.