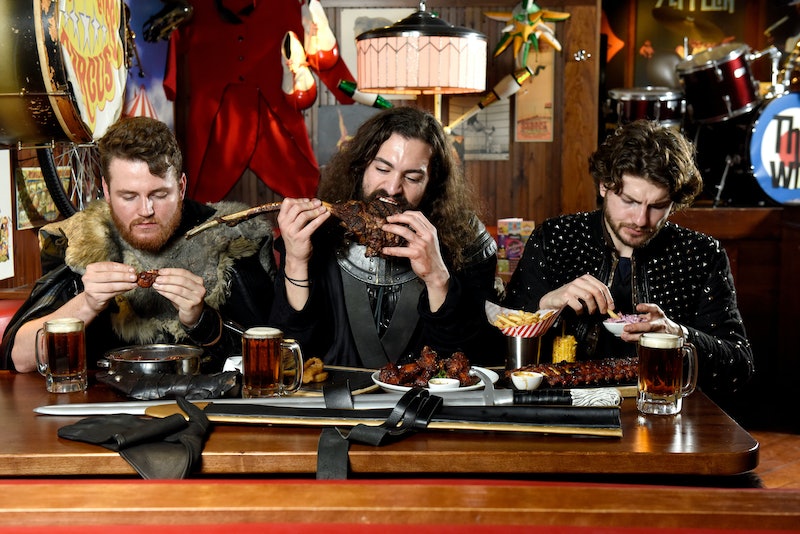 Holy meat. Pretty much everyone is out-of-control excited for the premiere of the final season of Game of Thrones coming right around the corner. Maybe you're re-watching old seasons, maybe you're planning a party with friends, maybe you're curled up with your Mother of Dragons body pillow in a totally normal and healthy way, like I am right now. But some people are getting a lot more hands on in their celebrations. Over in the UK, the TGI Fridays Game of Thrones celebration has arrived — it's called the Dragon-Slayer Feast and it is not messing around.

“I am a massive fan of the show and as both it and Fridays are known for serving up epic feasts, I jumped at the chance to bring the two together and curate a menu for Fridays to mark the launch of the new series," Terry McDowell, Head of Food and Drink at TGI Fridays explained in a press release. "Our food is perfect for brave warriors across the Seven Kingdoms so what better way to celebrate the return of this epic series.”

Basically, the Dragon-Slayer Feast is a celebration of all things meat. There's the Tomahawk Dragon-Slayer Steak, which is a massive 30-ounce, bone-in ribeye steak. If you don't know how big 30 ounces is, to put it into perspective it's almost four times the size of Fridays standard sirloin. Does anyone need that much steak? Doubtful, but you can channel your inner Hodor and take on the challenge. Not only is it huge, it comes with onion rings, mushroom, fries and Texan toothpicks — which doesn't seem to be particularly Game of Thrones-inspired, but imagine they're White Walker sticks and we'll call it a day.

My personal favorite is the Dragon Fire Hot Wings, which are served with creamy blue cheese to keep you from actually breathing fire. There's also the Bucket of Beast Bones — a combination of ribs and wings all treated with Fridays Legendary Glaze and served in a medieval-style metal bucket. I don't know what makes a bucket "medieval-style," but I'm willing to roll with it.

This menu is currently only available in the UK from April 10 — Bustle has reached out to the U.S. TGI Fridays to find out if a version will be available stateside, but only time will tell. If you're desperate to get your GOT fun on in the US, don't you fret because there are plenty of ways to to celebrate. Game of Thrones Oreos have made quite a splash, with new GoT designs on the cookie itself or you can try the Game of Thrones Shake Shack menu. In fact, Game Of Thrones merchandise is popping up all over the place. Really, if you want to celebrate you could end up dressed head-to-toe in Game of Thrones gear, eating GoT-inspired food, and watching every single episode in one sitting until your face melted off. The DREAM.

Game of Thrones season eight is landing on April 14, which is just days away. There are plenty of ways to show your enthusiasm and, as every, most of them involve food. But if you want to get your meat on like you're a brother of the Night's Watch camping in the wilderness, then you might want to a book a ticket over the UK ASAP.