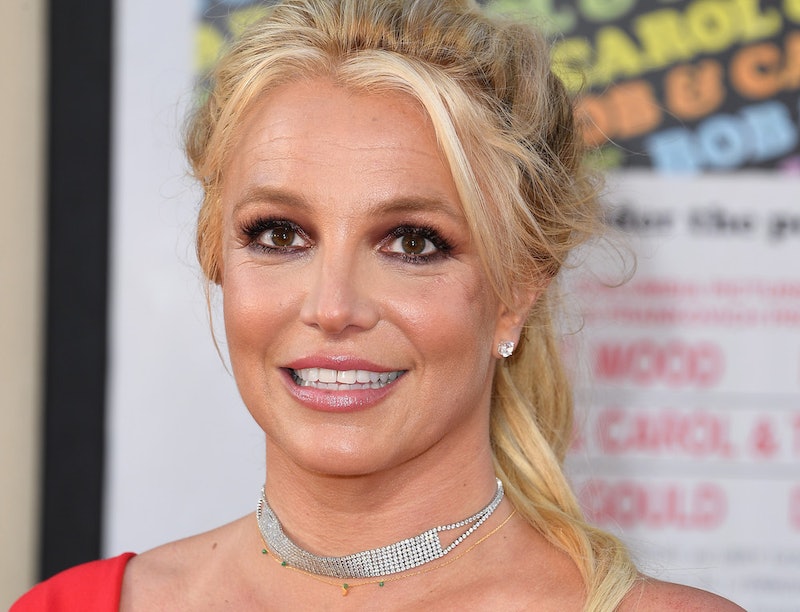 Calling all art connoisseurs and Britney enthusiasts: the viral Britney Spears solo art exhibition isn’t quite what fans might think. Galerie Sympa, an art gallery located in France, announced on Instagram last week that Spears’ first solo exhibition titled “Sometimes You Just Gotta Play!!!!!!” was set to take place on Jan. 18. However, Spears' rep told Bustle there's "no truth" to claims that the "...Baby One More Time" singer is involved in the exhibit.

Galerie Sympa first announced the exhibit last week alongside a photo of a flower painting that Spears had painted in a viral Instagram video. In the clip, Spears is seen painting the flowers as whimsical classical music plays in the background. The exhibition’s namesake stems from the caption that Spears had written alongside the clip that read, “Sometimes you just gotta play!!!!!!” Additionally, Spears sold the flower painting for $10,000 at an auction in Las Vegas in 2017 to raise funds for victims of the Route 91 Harvest music festival mass shooting.

The gallery’s official “Sometimes You Just Gotta Play!!!!!!” exhibition page also invokes the #FreeBritney movement, a social media campaign that emerged last April to free Spears from her conservatorship. (Since 2008, Spears’ estate has been under the temporary control of her father, Jamie Spears.) When news that Spears checked into a mental health facility and paused her Las Vegas residency circulated last year, #FreeBritney reached a fever pitch when it had been suggested that Spears didn’t enter treatment at her own will.

After the hashtag went viral, however, Spears responded to the controversy on social media and declared that all was well. “My situation is unique, but I promise I’m doing what’s best at this moment,” Spears wrote on Instagram at the time. “You may not know this about me, but I am strong, and stand up for what I want!”

Since the movement, Spears has been more active on social media. She launched The Zone, an immersive experience that draws its name from Spears’ 2003 album In the Zone, that takes fans through interactive rooms that chronicle Spears’ decades-long career. Spears teased the Los Angeles-based event on Instagram and wrote, “I’m so excited to share this with you guys !!!”

So, while the Spears solo exhibition may not technically be happening, there's still the opportunity to enter The Zone.

More like this
Will Beyoncé Be At The BET Awards To Perform “Break My Soul” Or Attend The Show?
By Jake Viswanath
Netflix Settles With Mo'Nique After She Sued For Racial & Gender Discrimination
By Jake Viswanath
Amber Heard Says She Fears Being Sued By Johnny Depp Again
By Jake Viswanath
Tanya Burr Is Expecting A Baby With Her Mystery Partner
By Maxine Harrison
Get Even More From Bustle — Sign Up For The Newsletter