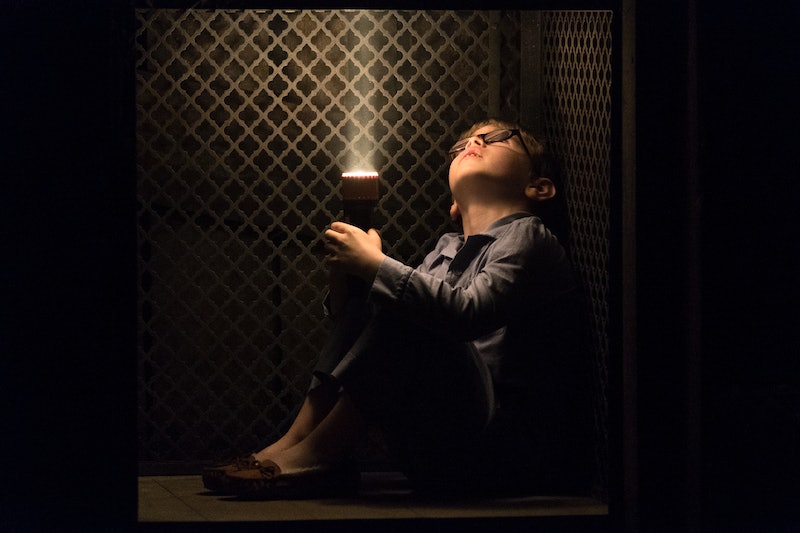 Horror is a subjective genre. What makes some people afraid is different from what makes others afraid, and that applies to the scariest moments in The Haunting Of Hill House. The Netflix horror series is absolutely steeped in dread, but the results will differ based on the person watching it. For some, supernatural scares are the most terrifying; for others, the more realistic, "it could actually happen" horror is the kind that sends chills down their spines. But no matter what you're afraid of, there's undoubtedly something in Hill House that will give you goosebumps.

That's because the scares in the series are just as diverse as its characters. The show follows the Crain family — Hugh and Olivia and their five children, Steven, Shirley, Theo, Luke, and Nell — and devotes one episode to each character, tapping specifically into what that person is afraid of and exploiting it to its fullest extent.

If you've heard all your friends raving about Hill House but have yet to make the plunge for yourself because you're apprehensive of how scary it is, I'm here to help with a handy guide to the scariest moments in the series — one per episode, to be exact — so you're fully prepared for the most frightful things Hill House has to offer. (Obviously, spoilers ahead.)

At the end of the premiere, the eldest Crain sibling learns that his youngest sister has died while she's standing next to him in his apartment. Full of dread, he turns around only for her ghost to scream in his face. I get that she wanted him to know she was dead, but...rude.

I won't soon forget the bug that crawls out of the dead kitten's mouth in this episode, but that was more disturbing than "scary" per se. The biggest fright of Episode 2 comes when Shirley and Theo begin hearing deafening knocks on the walls of their bedroom. When their father arrives, it's no comfort: he morphs into a horrifying ghoul. Yes, it's just a dream, but it's still scary in the moment.

3. The Zombie In The Basement

The third episode of Hill House really dials up the horror when young Luke takes a trip in the dumbwaiter into the dark, unexplored basement of the mansion… only to be slowly approached and attacked by a zombie, his flashlight flickering on and off as he screams helplessly. This is certainly the stuff of nightmares.

If I ever wake up and see this tall, floating man coming towards me down my hallway in the middle of the night, I will burn my house down and never sleep again for the rest of my life.

The figure of the so-called "bent-neck lady" haunts Nell for her entire life. And while the twist at the end of this seminal episode packs an emotional wallop, the scariest part comes earlier, when the ghost once again corners her in a hotel hallway and drops suddenly from the ceiling. Again, these ghosts are just rude.

"Two Storms" is more of a cinematic tour de force than a masterclass in terror — the entire episode consists of four very long, uninterrupted takes. But it still manages to fit in plenty of creepiness, including statues that turn their heads between shots if you look closely, and ghosts popping up in unexpected places, including in a previously empty bed.

There's one horrifying moment in this episode when Hugh and Theo see a ghost crawling across the floor of Shirley's home office towards them, but the more sudden, frightful moment comes earlier when Luke is at his sister's graveside… and suddenly his mother's ghost grabs him from beneath the earth and attempts to pull him into the grave as well.

8. Don't Make Me Pull This Car Over

All right, this one is just mean. The most notorious and generally agreed upon scariest moment in Hill House comes in this episode, when Shirley and Theo are driving quietly back to the mansion, only to be suddenly and loudly interrupted by their dead sister, who pops up between them from the backseat and screams in their faces. (Be warned, there's another jump scare in this episode when the ghost of evil flapper Poppy suddenly grabs Luke's head from behind. That one's not so great, either.)

Olivia's worst nightmare also becomes our worst nightmare when she has a vision of her own daughters all grown up and dead on a slab in a morgue. But it only gets worse when Nell sits up and grabs a pair of nail scissors to slowly snip apart the wire holding her jaw shut. *Shudder.*

In the finale, each character has to grapple with their own worst nightmare after they become trapped in the mansion's haunted Red Room. But Theo's vision is by far the worst for anyone scared of being grabbed from under the safety of their own bed, as she finds herself suffocating under not one or two, but a whole host of gray, rotting arms. No thank you, Hill House.

The story of the Crains may have ended with the Season 1 finale, but judging by how much buzz the show has been getting, Hill House will undoubtedly return to scare the crap out of us in new ways in the not-too-distant future.

More like this
David Tennant’s Transformation In ITV’s 'Litvinenko' Is Astonishing
By Sophie McEvoy
Here’s How 'The Crown' Will Cover Princess Diana's Tragic Death In Season 6
By Brad Witter
Matt Smith Proves He's Daddy Daemon In This Viral 'House Of The Dragon' Video
By Marina Watts
The 'Firefly Lane' Book Ending Teases Way More Tears To Come In 2023
By K.W. Colyard
Get Even More From Bustle — Sign Up For The Newsletter