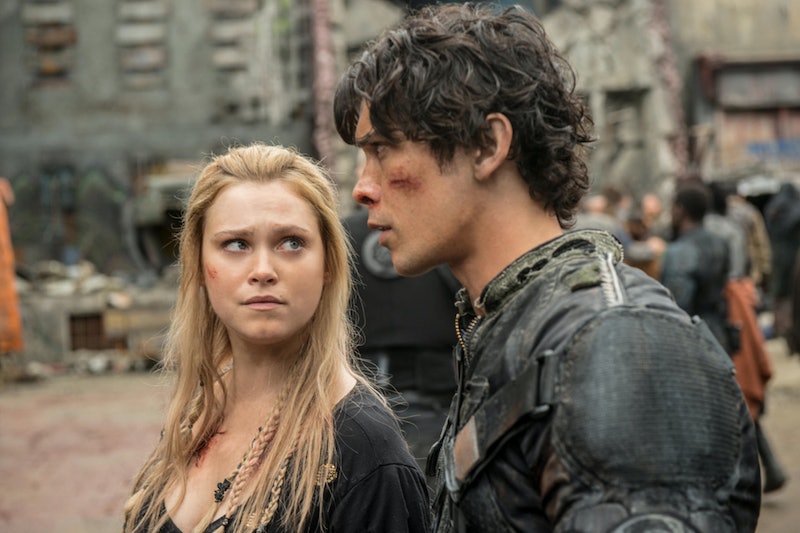 Nuclear meltdown or not, Clarke still has a whole lot of world-saving ahead of her. According to TVLine, The CW has renewed The 100 for Season 5. The news comes just a less than a month after the show's Season 4 premiere which introduced a possible world-ending event that would leave all of the characters in imminent danger of radiation poisoning.

The bleak storyline appeared to be putting an endgame in place for the sci-fi series that could easily have led to one of the most distressing TV finales ever. Since this is The 100, don't count on Season 4 to suddenly offer Clarke, Bellamy, and the rest of the characters an easy solution to their apocalyptic problem. If anything, the Season 5 renewal only makes Season 4 more captivating.

At least some of the characters have to survive for a Season 5 to happen, which means Season 4 has gained a new sense of urgency. There is a clock ticking for Clarke and the various clans who have made their home on Earth. They have a choice to work together to find a solution for their nuclear problem, or they can tear each other apart, ensuring their mutual destruction. Seeing how the story unfolds and what catastrophe it leads to next is exactly the kind of complex sci-fi storytelling that keeps fans coming back for more.

Of course, it was hard to guess whether or not the fans would come back at all after the controversial Season 3 deaths of Lexa and Lincoln. The show seems determined to move forward with even more drama than ever before. Even the most frustrated of fans may find themselves intrigued by the latest plot twist and what it could mean for their favorite characters.

An early renewal could have sapped away the tension for any other show, but knowing The 100 will be returning next year only adds to its Season 4 momentum. Few teen shows have ever been more unrelenting in their survivalist nature, or more terrifying in the way environmental disaster is used as the ultimate big bad of the story. It is because anything can and does happen on The 100 that knowing there is more ahead is a good thing.

Here's hoping The 100 continues to put its wonderfully stubborn and heroic lead Clarke front and center as the characters grapple with the potential apocalypse and what it will take for them to survive. While some fans may have issues with the series overall, there's no denying Clarke's journey deserves plenty of time to play out. A character of her caliber should have at least one more season to grow into her role as the resident leader and kick-butt hero of the new world.