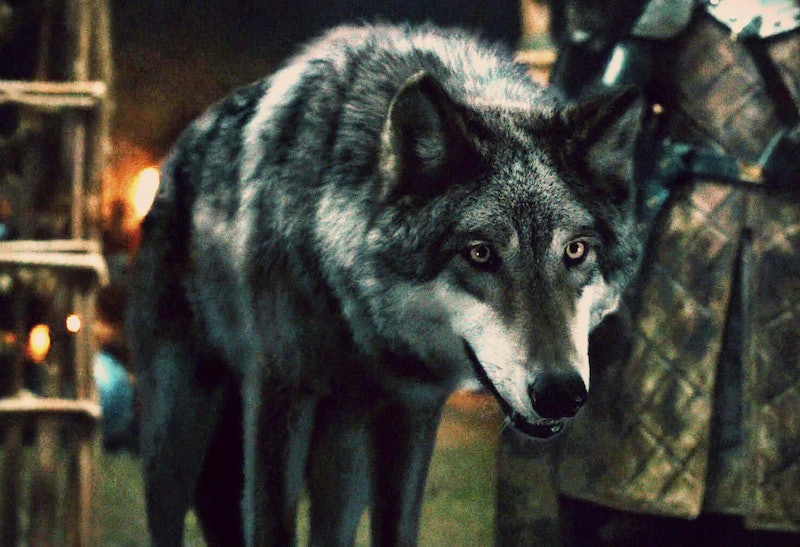 Since we first met House Stark on Game of Thrones, it’s been easy to root for the wolf pack. But the direwolves from Game of Thrones that the Stark kids found in the first season have been even easier to root for. Sadly, as the Starks have dwindled in number, so have their impressive pets. And the animals that do survive don’t often make the final cut (likely because the direwolves are extremely difficult to CGI, apparently).

Since direwolves are the animal symbol of House Stark, you’re partly rooting for the animals and partly rooting for the honest and noble — if not sometimes thick-headed — house of the North. And, since there aren’t enough moments featuring the impressive creatures, it can sometimes get nerve-wracking to see them onscreen. You never know if they’re just making a cameo to remind you that they’re around or if they’re about to meet their ultimate doom.

Hopefully at least one or two direwolves survive the entire series, along with their Stark counterparts. But if all the houses take each other down and only Nymeria survives to sit on the throne with her wolf pack serving her, that’d be OK, too. After all, the direwolves have given us some of the show's best moments.

Let's not forget that iconic first time that we saw those adorable husky-looking puppies onscreen. Some of the Stark men were off on a hunt and they stopped to investigate some sad animal sounds. While Ned Stark was ready to sacrifice all the little creatures to put them out of their misery, it was the technical non-Stark, Jon Snow, who suggested they be gifted to Ned’s children. The timing was perfect, the numbers were perfect, and Ned had enough of a soft spot for creatures in need that he agreed to the request. Immediately, Game of Thrones had new furry superstars.

Just as they’re getting ready to leave the forest with their new direwolf pups in hand, Jon hears a strange sound. He sees one more pure white “runt” of the litter and picks it up. The two creatures look at each other, and it’s love at first sight for them and for everyone else witnessing the moment.

After his fall (or, rather, his push), Bran is pretty vulnerable. His direwolf, Summer, stays by his side. Though the Starks are clearly bonded to their animals, it’s not yet clear just how fiercely their massive beasts will protect their owners. When Catelyn Stark is surprised by a murderous visitor and puts up as strong of a fight as she can, Summer steps in to finish the man off and make sure Bran is completely unharmed.

Just like his owner, Grey Wind was one of the most badass pups that ever lived. After Jaime Lannister is captured by the Starks, Robb comes in to pay him a visit. Jaime was his usual sassy self with Robb until Grey Wind strolls right in behind Robb and stands next to him. Only then does Jaime — and the rest of the audience — get to see just how impressive and terrifying these animals really are.

Despite the fact that the direwolves often protected the Starks, Arya has to protect her pup first. Knowing that Nymeria will be killed, she forces her to run away into the wild. In doing so, she rips her own heart out and the heart out of every Game of Thrones fan.

In a tense scene between Sam, Gilly, and two would-be attackers, Ghost steps in behind Sam to make sure the bad guys listen to what he has to say. Ghost’s intimidating appearance and “I mean business” growl are enough to scare the men off in mere seconds.

Back in Season 3, Bran had only newly discovered his warg abilities. But in a tense moment where Wildlings (and Jon) nearly discover the whereabouts of Bran and his crew, he actually becomes Summer for the first time. He sees Jon being attacked and, as Summer, starts protecting him.

8. Grey Wind Is A Battle Badass

Grey Wind didn’t just sit around growling at prisoners. Like his brave Stark counterpart, he engaged in battle and played an important role in many of Robb’s successes. In fact, he’s so powerful that his battlefield antics launch rumors in King’s Landing about armies full of wolves.

9. Ghost Wanders Beyond The Wall

Ghost, like his owner Jon, tends to do his own thing. In Season 2, we see the direwolf flex some of his freedom by ignoring Jon’s calls to stay with the group as they wander beyond The Wall. It’s a pivotal moment that reminded all of us that these animals choose to protect their Stark counterparts, but they’re certainly not beholden to everything they say.

As Jon Snow’s slain body lay on a table and his closest friends conspire about what to do about it (if there even is anything to do about it), Ghost stays right by Jon's side. He makes sure anyone who wants to come in and take the body away knows that they’re going to have to get through him first.

In the final episode of Season 6, two of the Bran's most trusted protectors make the ultimate sacrifice to get him out of harm’s way. Sensing Bran needs some time to get ahead of his attackers, Summer bravely turns to the Army of the Dead, growls, and does her best to take some of them out before they take her out. Her sacrifice, combined with Hodor’s, allow Bran and Meera to get to safety in the nick of time while the rest of us at home uncontrollably bawled our eyes out.

One of the highlights of Season 7 was when Nymeria comes face to face with Arya again. As they stare at each other, Nymeria is clearly the pack leader of a group of wolves who considered Arya an afternoon snack. Arya begs her former friend to come back to Winterfell with her, but when Nymeria chooses her freedom — her choice this time — Arya knows that she would have chosen the same thing.

Despite the fact that Lady, Sansa’s direwolf, has the shortest life of the entire pack, she has a happy real-life ending. Sophie Turner (aka Sansa Stark) adopted the puppy that portrayed her direwolf. So even though we didn't see much of Lady on the show, she's living a pretty happy life behind-the-scenes.

Case closed: the direwolves are the best part of Game of Thrones. Reliving these moments, both happy and sad, will help make the hiatus just a little easier.